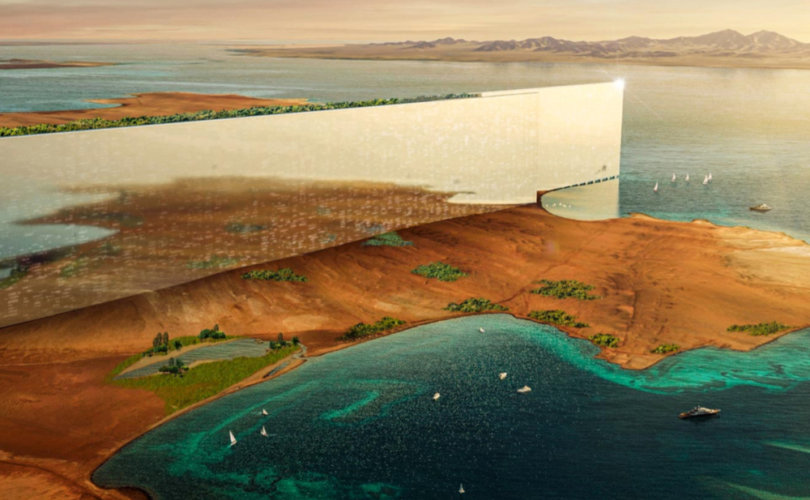 (LifeSiteNews) — Last Tuesday NPR shocked and confused the world with a piece on an announced project in Saudi Arabia to build “The Line,” or “Neom,” a 200 meter wide, 170km long city, with 500mtr high walls.

To anyone with a knowledge of history, and penchant for pop culture, this immediately drew up memories of “Judge Dredd,” “Escape from New York,” or a whole plethora of fictional dystopias, which are too numerous to list here. To those with discernment and an eye on history, this appeared not as a utopia, but as a prison, a hellscape.


Images of China’s failed ‘controlled cities’ experiments, or even their current locked-down cities like Wuhan quickly come to mind. Saudi Arabia claims they will pack 9.5 million people in this Hell hole.

I couldn’t help but think of “Mega City 1” from “Judge Dredd.” The thing about Dredd though, is that it was supposed to occur because of Climate Change somewhere in the third millennium, not because of greedy eugenicists wanting to build back better slavery in 2030.

Watching the advertisements for “The Line,” one could very quickly get a grasp of whose vision this was really based on. They have many names, the Left, Climate Zealots, the World Economic Forum (WEF), United Nations, World Health Organization, Free Masons, etc, but ultimately this all goes back to the vision of one lunatic – Klaus Schwab. His 4th Industrial Revolution or the ‘Great Reset,’ and Transhumanism.

READ: Dr. Robert Malone: Media silence on the Dutch farmer protests should serve as a warning to the US

In the adverts for “The Line” you can see the key tenets, or shall we say commandments of Schwab’s 4th Industrial Revolution. Climate control, A.I. in control of everything, no ownership (after all, “The Line” is just a massive condo,) all your amenities allegedly within walking distance, health care, digital infusion with humanity, and of course restricted travel. There are no cars in this ‘utopia.’

“The Line” supposedly has a zero carbon footprint, and yet there is an airport, and only at one end of the line. People will allegedly travel by rail, which I’m assuming will be electric with some sort of magnetic propulsion. How is that electricity generated at sustainable levels? Also how do you access this rail? Who is allowed to fly?

Residents can apparently travel outside the line, but there is only one entry and exit point, and no one owns cars, so how do you get out for a vacation? You will obviously have to rent something. You will not own your own transportation. Would you have to file an itinerary with someone? Do you need permission from your feudal lord to leave the bug farm, that you don’t own? There are so many questions that need answering, and I’m betting we will not like or want the answers.

Schwab and the WEF have made no attempt to hide that they wish to eliminate private car ownership and air travel by 2030. Ireland, the U.K., France, and most of the E.U. are looking at all kinds of ways to strand you under your benevolent lord’s care. From taxes based on kilometers driven, restrictions on vehicle size, speed limits of 20kph on highways, black out driving zones and times, to airport closures, digital ids, and carbon allotments. Everything is coming up, “You go where and when you are told.”

Just 5 years ago, my wife and kids and I used to travel freely, pretty much anywhere we wanted. I’ve been to England, France, Germany, Holland, Nigeria, Japan, India, and of course the United States. I was not, and am not a financially wealthy person, but by saving money, we were able to afford several trips as a family. Travel was much easier, and far cheaper. But in five years that has completely been destroyed. The majority of the headaches have been in the last 3 years.

My wife has not seen her mother or siblings, or our nieces and nephews for 5 years. She can’t leave Canada, even though she is a permanent resident and lived here for 13 years. She would not be able to come back to her husband and kids unless she submitted herself to a forced insertion in her body, repeated q-tip lobotomies, and a forced stay at a dingy concentration camp they euphemistically call a ‘hotel.’

A little more than a month ago we applied for a tourist visa for my wife to enter the U.S. I’m planning on attending Life Site’s 25th Anniversary Gala, and we thought we would make it a family trip, let the kids go to Universal Studios, swim in the gulf, and other such memorable moments.

Alas, after filling out the forms, my wife was told she would not be given a visa until they personally interview this tourist, to see if she was fit for a tourist visa. This interview would not be until May 2023. Like some 4th rate failed state, the U.S. decided it would take a year to see if it was possible to maybe visit the U.S.. Meanwhile, if we all just flew to Mexico, and crossed the Rio Grande, we would be bussed to D.C.

I used to be able cross into the U.S. with only my driver’s license, now I must have my passport, and maybe my birth certificate? Am I expected to believe that there is a year’s worth of Canadian permanent residents applying to visit the U.S. in Calgary?

The last time I applied for a visa to India, I waited 48 hours, and they gave me a 3 year multi entry visa. I’ve been to parts of India that are so restricted and dangerous, that you have to get a second visa to go to those places, and you have to log every town you are going to, and how you are getting there. Places so restricted, that they were on a list of places the Canadian government said a Canadian should never go. Places so dangerous I had to sleep on the floor to avoid stray bullets. I was once even given army escort to the airport. It was so rare for a Canadian to go to these places, that I had the Consulate ask if they could debrief me, when I left. (I saved that letter.)

In all those times I travelled to these places, I never had to wait a year for permission. NEVER.

The population of India dwarfs that of the U.S., and corruption and bribes are a part of life. So why is it that my wife can’t visit Universal Studios in Florida? It is because these travel headaches are no accident.