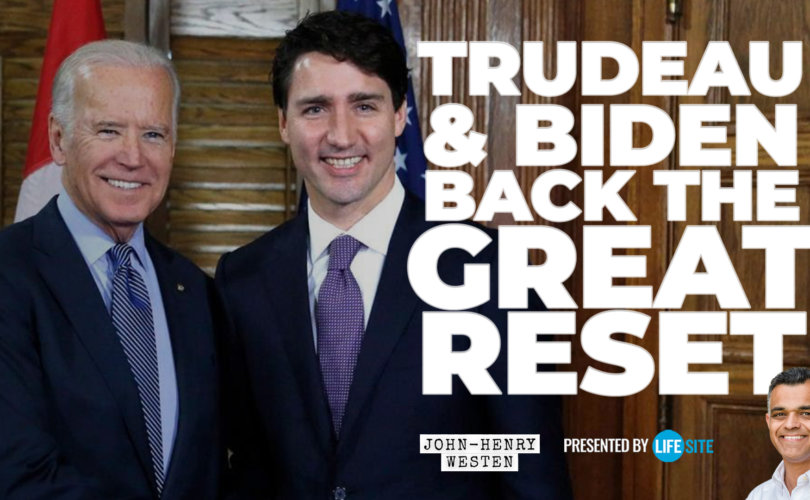 November 15, 2020 (LifeSiteNews) – I wanted to warn my brothers and sisters in the USA about what they are in for if Joe Biden gets elected at the end of this US election fraught with fraud. This election that President Trump clearly won counting legal votes is one of the greatest threats to Democracy ever to confront the USA. Just have a look at Canada’s Prime Minister Justin Trudeau and how much he is like Biden.

Trudeau, like Biden touts the idea of using the Coronavirus to launch a New World Order or as the latest saying goes, launch a Great Reset.

He, like Biden, speaks of ‘Build Back Better’ which refers to the same program.

Later this week I’ll do a full show on the Great Reset to explain it in detail.

Both lie with impunity. Remember when Biden promised during the debate he would not declare victory until the votes were certified? Well he lied. Trudeau did exactly the same thing. He was asked if what he’d do about a contested election result in the US and he said would ‘not interfere or engage in any way in their electoral processes.”

Trudeau issued a statement less than an hour after the media called the election, sending his congratulations to the “next President and Vice President of the United States of America.” Moreover, even though the election is still being contested Trudeau made a fool of himself on November 9th boasting on Twitter that he called up Biden to speak with him on matters relating to foreign and domestic policy.

Trudeau, like Biden, is socialist. They are both self-proclaimed ‘Catholics’ who promote abortion on demand and trounce the Christian faith with homosexual advocacy. They both are ever-ready to crush religious freedom with lockdowns banning church services while abortion clinics and pot shops remain open for business.

The most dangerous people in the world are not the atheist or agnostic but the fallen away Catholic who has abandoned the ultimate Truth. They are more dangerous still since while having abandoned the true faith they continue to claim belonging to it, and since they are leaders in the limelight they mislead many. With our Catholic hierarchy refusing to excommunicate and call out their false claims to be Catholics they are the most dangerous of enemies of the faith.