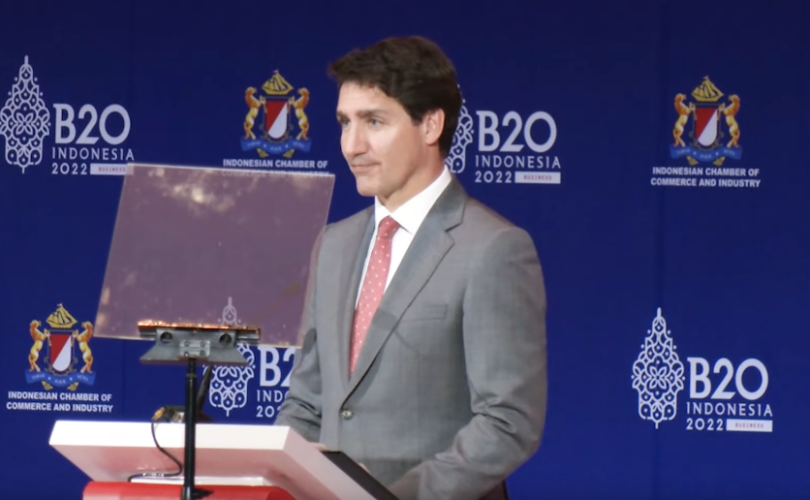 (LifeSiteNews) — Prime Minister Justin Trudeau and Liberal Public Safety Minister Marco Mendicino made the rounds last week calling on international corporations and governments to do their best to take stronger control of the internet.

They did so under the guise of safety, saying that people should be protected from “bullying” and “misinformation.”

For his part, Trudeau was in Indonesia at the G20 summit, and gave an address to the B20, which is a group consisting of business leaders in the G20, hence “B20.”

His speech was largely forgettable, as most of the things he says are. But, in Trudeau fashion, he ensured to feign concern for the good of the human race, while calling on unelected corporations to take more control over how human beings communicate.

After saying he supported “free speech,” he qualified this by saying that free speech does not extend to “bullying” or “attack[ing] people online.”

“Governments and especially big technology companies” need to step up and “address online harassment and violence to ensure trust in technology,” he continued.

Now, if he meant this in a general sense, and he wasn’t a narcissistic dictator, then perhaps we could welcome his statements. Of course, we do not want people to be harassed, and it is more than reasonable to assert that tech companies and purveyors of online communication platforms could have a hand in assessing criminal behavior. However, this is clearly not what he was referring to.

We can gather from Trudeau’s public statements what sort of “bullying” he believes is perfectly fine.

For Trudeau – AKA Prime Minister Blackface – it is perfectly licit to bully millions of Canadians and contribute to their harassment by leftist malcontents by fueling hatred of the unvaccinated through bigoted comments disseminated to millions of people online.

Of course, to dispute the things that Trudeau has said, well, that might be “misinformation.”

Not to be outdone by his boss, at a G7 interior ministers gathering in Germany last week, Public Safety Minister Marco Mendicino said that disinformation is “one of the most pervasive threats to all our democracies right now.”

Taking a leading role at the G7, Canada has invited counterpart interior and public safety ministers here for a summit to tackle disinformation, which is “one of the most pervasive threats to all our democracies right now.” https://t.co/vO5BUIYqTz

The minister then went on to express his desire that Canada continue to play an international role in coordinating “strategies” to fight misinformation.

To support Mendicino’s assertion that disinformation is rampant, the Globe and Mail reported on these comments saying: “A study by the University of Calgary’s School of Public Policy found that thousands of tweets and retweets about the war in Ukraine can be traced back to Russia and China.”

Clearly the only solution is to censor the internet…

I agree with the Liberal hacks

As is often the case, I agree with the Liberal hacks, but from a reverse perspective, which is likely because we seem to live in parallel realities.

Mendicino said he wants governments to “build up digital literacy to equip citizens in all our countries with the skills and the tools that they need to understand … what is fact and what is not fact.”

I agree with this. If more people had digital literacy, then they would easily have been able to see that Mendicino had lied at least a dozen time about the Freedom Convoy.

What’s there to misunderstand? pic.twitter.com/Taf71NEC8v

He also said it was a “pervasive threat that faces all democracies, and we do need to get ahead of it and really start to push back on the spread of disinformation.”

Again, I agree. We should all get ahead of the misinformation that comes from him and Trudeau and learn to figure out what the actual truth is.

Of course, the calls from Trudeau and his minister to control the online narrative are consistent with the goals of the Great Reset’s progenitor, the World Economic Forum (WEF).

The WEF published a piece in October that may as well have been the same script used by Mendicino. The following was stated: “But businesses, governments and individuals can work together to reduce the spread of disinformation. Governments can implement appropriate legislation to curb the spread of lies on tech platforms and ensure that school children receive appropriate cyber and media literacy training. Businesses can build in more robust safeguards for consumers and better educate employees about ways to identify disinformation. And individuals can seek reputable news sources and learn skills that keep them and their families safe.”

We shouldn’t be surprised that this is happening under Trudeau’s watch, given the fact that Great Reset boss Klause Schwab has publicly said that he is thrilled that his organization was able to “penetrate the cabinets” of countries like Canada with men like Justin Trudeau.

It looks like the war for truth won’t be taking a break any time soon.