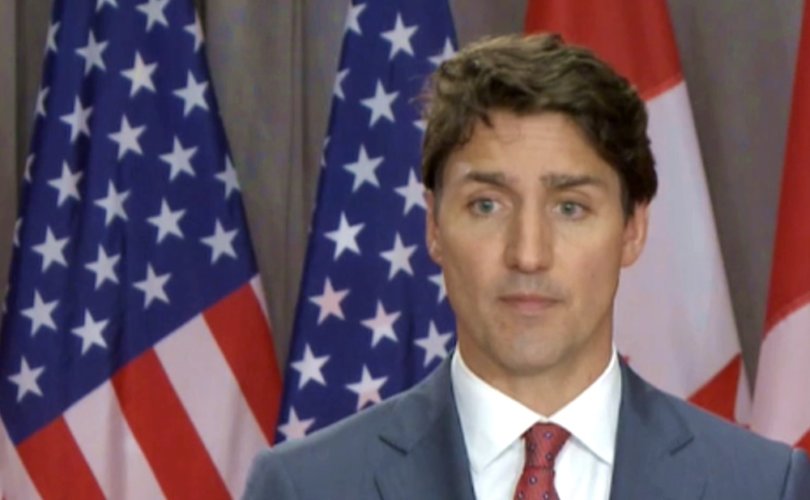 May 31, 2019 (LifeSiteNews) – Among all of the leaders on the world stage, Justin Trudeau primarily stands out for a single reason: His abortion extremism. As I’ve noted before, he misses no opportunity to push and promote abortion, and it is one of the few subjects aside from his own perceived virtue that he seems genuinely passionate about. Unfortunately for Canadians, that passion is coupled with a profound ignorance on the subject—Trudeau seems genuinely unaware that Canada is the only democracy without any abortion laws whatsoever, and that the status quo he is defending is grotesquely unique.

His arrogance was on full display this week when he attempted to shoehorn a discussion on abortion into a meeting with Vice President Mike Pence on NAFTA and issues related to China. Trudeau was concerned about American “backsliding” on the issue and claimed that “Canadians” are also very concerned about it, even though this projection is primarily a figment of his imagination, where everyone constantly agrees with him.

Trudeau is simply hoping to make abortion an election issue, and thus he pretended that the Vice President is able to address concerns about laws passed by state legislators, when in reality he was virtue-signalling to his base. Their exchange at a post-meeting press conference on Thursday, where Trudeau expressed his opposition to “anti-choice laws” and Pence reaffirmed his commitment to “the right to life,” was cringe-worthy on both a diplomatic and a human level.

Canada’s progressive parties do not simply demand that elected officials agree that abortion is a right, they demand that Members of Parliament give standing ovations to celebrate the four million pre-born children who have been dismembered, decapitated, and disemboweled since the procedure was first decriminalized in 1969. In fact, when one MP called for the unanimous recognition of a woman’s right to have an abortion “for any reason” in the House of Commons this week, all Liberal, NDP, Green, and Bloc Quebecois MPs leapt to their feet to deliver a standing ovation that lasted for over two minutes while the Speaker called for order. It was a vile display of grave-dancing, and I was relieved to see that the Conservatives did not join in.

Even some of Canada’s media commentators are getting fed up with Trudeau’s attempts to distract from his scandal-ridden tenure by pumping his street cred on the feticide file. Over at Maclean’s, Andrew MacDougall mocked Trudeau for attempting to cover his incompetence with enthusiasm for abortion:

It needn’t be an SNC; the threshold for talking about the threat to abortion is now incredibly low. At this point, the town drunk in a one-stoplight town in rural Western Australia could tweet his opposition to abortion and Trudeau would ring up Scott Morrison, the Aussie prime minister, and dress him down for not keeping his citizens in line on the subject of more dead babies.

Over at the Washington Post earlier this week, my friend J.J. McCullough also noted Canada’s position as a “wild outlier in global abortion policy” in a column titled “Why is Canada so afraid of debating abortion?” Because politicians like Trudeau only bring the issue up to insist that nobody should be bringing it up, he noted, our national discussion on this issue had become deeply pathetic:

The consequence has been a deeply sheltered society embarrassingly ignorant of even the most basic facts of the issue, and thus largely incapable of discussing one of the defining ethical challenges of our time in a substantial, adult manner.

The difficulty with our current prime minister is that he seems unable to discuss any complex issue in a substantial, adult manner, instead relying on faux outrage, parroting progressive talking points, and attempting to simply insist that “Canadians” agree with him. And nowhere has his sheer shallowness been on display quite as prominently as his refusal or inability to grapple with one of the most complex moral and ethical issues of our time.