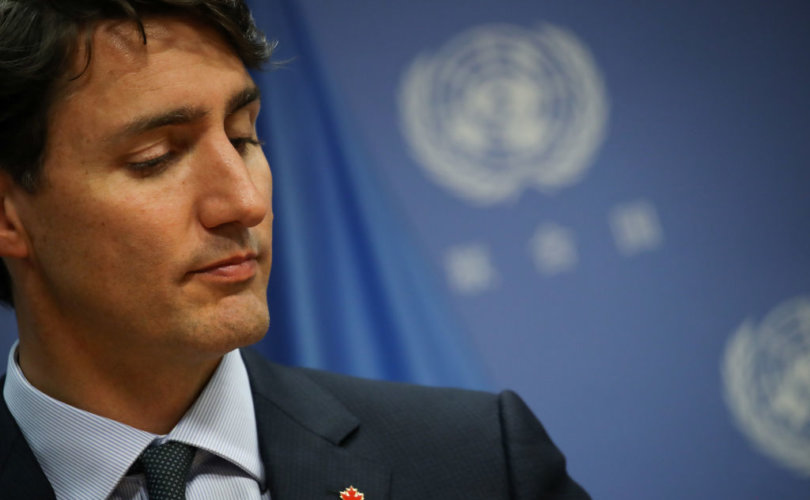 June 18, 2020 (LifeSiteNews) – After boasting that “Canada is back,” claiming that Stephen Harper embarrassed Canada on the world stage, and promising that achieving a seat on the UN Security Council would set all of that right, Prime Minister Justin Trudeau suffered an embarrassing rout this week when his own longstanding (and expensive) bid failed.

Canada came in third, after Norway and Ireland. In what must be an extraordinary humiliation for Trudeau, his years-long bid for the UNSC seat actually garnered fewer votes (108) than Harper’s did back in 2010 (114). If Harper’s failure was a reflection on his leadership, as Liberal luminaries told us at the time, Trudeau’s failure to even achieve what Harper accomplished must be something truly shameful.

Paul Wells summed it up with brutal candor over at Maclean’s: “Believing a win at the UN would fall from the heavens on Trudeau because he wasn't Harper was an expression of the narcissism and shallowness that have characterized this government during much of its time in office.”

Canada’s failure to secure this seat is unsurprising for a number of reasons. First of all, despite the unwillingness of Canada’s leaders to admit this, Canada is not a powerful or consequential country. Canada has not been a middle power since shortly after the Second World War, and Trudeau has ensured that Canada’s primary role on the world stage is the projection of “wokeness,” with millions of taxpayer dollars being funneled to developing countries to procure abortions for impoverished women. Abortion, as I’ve noted before, is one of Trudeau’s favorite subjects. Incidentally, there are more than a few socially conservative leaders at the United Nations who don’t find Trudeau’s obsession with pelvic issues and feticide endearing. Canada is back, indeed.

It also bears mentioning that Justin Trudeau has been an international laughingstock at multiple points throughout his tenure as prime minister (as opposed to Harper, whose major fashion gaffe was a safari vest he wore on a trip to Mexico.) There was the “peoplekind” incident, which provoked global gales of laughter and triggered savage columns from the British press. The consensus seemed to be that the fresh new Canadian PM was trying too hard, and that he should perhaps relax a little. And then came his India trip, in which he pranced across the country like an Indian version of the Village People. Even Indian celebrities told the press that Trudeau appeared to be more Indian than those he was visiting. Everyone appreciated the effort (with much snickering and even rude chortles from a few quarters), but even the Liberals were forced to admit that the trip had been a high-profile embarrassment.

And then, of course, there was the blackface scandal, with photographs and video of Trudeau in blackface, cavorting like a monkey, at almost thirty years of age in one of them. When asked how often he wore blackface, he either didn’t remember or refused to say, neither of which were particularly positive indications of his past discretion. After cultivating himself as the “wokest” of world leaders, the scandal hit headlines around the globe, revealing to all that Trudeau could not live up to his own standards. Nobody doubted that Trudeau would have instantly axed any colleague guilty of the same sins. Nobody doubted that Trudeau believed so much in himself above all that he would flaunt the double standard and wear his hypocrisy proudly. Many suspected that his narcissism was so pronounced that he might actually believe his own myth.

So it cannot be surprising, then, that a leader with a penchant for embarrassing himself on the world stage failed so spectacularly to achieve the respect necessary to secure a seat on the UN Security Council. If Harper had made any of the mistakes that Trudeau has made, Trudeau would be frothing at the cameras as we speak, denouncing the irrevocable tarnish to Canada’s international reputation. Nobody would question that fact that a leader exposed as a shallow man with a penchant for costumes and blackface pitching Canada’s importance as a progressive voice would be seen by many as a transparent joke. But the same rules have never applied to Justin Trudeau, and so many will pretend that he was not the key factor in ensuring that Canada failed to secure the prize that Trudeau himself promised Canadians would be a sign that Canada was “back.”

Jonathon’s new podcast, The Van Maren Show, is dedicated to telling the stories of the pro-life and pro-family movement. In his latest episode, he interviews African-American pro-life leader Ryan Bomberger who speaks out about the harm being done by the Black Lives Matter movement and the best way to respond to the injustices that are happening in the US and across the world.