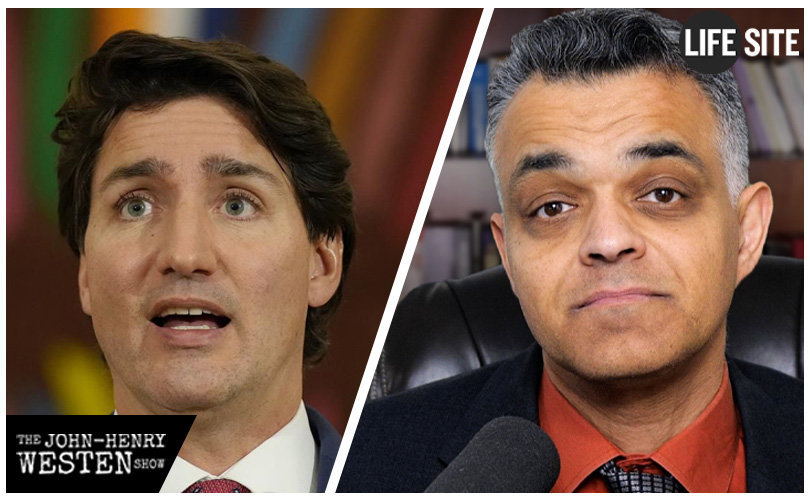 (LifeSiteNews) — President Joe Biden and Prime Minister Justin Trudeau have maligned Americans and Canadians who are opposed to receiving the experimental COVID-19 gene-therapy injections, scapegoating them for the lockdowns that they themselves are imposing.

Trudeau even went so far as to label vaccine free Canadians as “extremists,” “racists,” and “misogynists” who deny science.

And despite criticism, they have both doubled down, falsely claiming that the unvaccinated are responsible for the lockdowns when they know full well that “the science” is saying that the latest omicron variant seems impervious to the vaccine.

He is doing exactly what Hitler did to the Jews in the lead-up to the Holocaust. He is scapegoating a whole class of society and fomenting hatred. This is the great danger we are facing in our world today — it’s not COVID, it is tyranny and it is coming for all of us, vaccinated and unvaccinated.

Canadian Prime Minister Justin Trudeau was on a popular Quebec talk show and made comments inciting hatred for Canadians opposed to the COVID jabs. Even though his comments in the French-language interview were made in September, they only went viral when posted on social media last week.

Trudeau  spoke of “people who are vehemently opposed to vaccination.”

They “do not believe in science, who are often misogynists, often racists, too.”

The best response to Trudeau’s insanity that I’ve seen comes from Canada’s favorite columnist Rex Murphy who writes at the National Post.

“That rage against the anti-vaxxers was classic scapegoating,” said Murphy. But then Rex goes on to put Trudeau in perspective as only Rex can do. And, boy, I wish I could deliver this in Rex’s classic voice:

Who warned against gatherings and then went to a Black Lives Matter protest? Who shut down Parliament, conducted the government of the great nation of Canada, after his breakfast, from the Cottage of the Commons? Who called an election in the middle of the pandemic he was managing?

And while we’re in this territory: Who gets to call “racist” after being filmed prancing around in blackface four whole times? Who gets to hurl the word “misogynist” after leading a government that tried to sweep sexual misconduct allegations in the Armed Forces under the table?

And then Murphy crushes Trudeau for his tyranny, for his destruction of freedom.

Who gets to ask whether we can “tolerate” certain people who disagree with him, when that same person has gutted the Charter of Rights and Freedoms of all Canadians through his COVID decrees? Under Trudeau, the Charter, his father’s very glory, has turned to tissue.

In much of Canada, the unvaccinated may not go where they wish, may not visit family in moments of pain, may not travel or enter public places without their papers. And most significantly, if you resist taking the vaccines, you are that most felonious and vile of human beings; you are Justin Trudeau’s villain of the moment: an anti-vaxxer.

And who better to take down Biden’s similar insanity than Tucker Carlson.

If it were only North America doing this, that would be bad enough, but this phenomenon is all over the globe. In France, Prime Minister Macron just said publicly, “The unvaxxed, I really feel like pissing them off. And so we’re going to keep on doing that, to the very end. That’s the strategy.”

Macron went even further, with perhaps a more outrageous declaration: “When my liberty becomes a threat to the liberty of others, I become an irresponsible individual. An irresponsible individual is no longer a citizen.” He accused the “anti-vaxxers” of committing an “immense moral fault.” “They are undermining what constitutes the solidity of a nation,” he said.

In the Philippines, citizens who refuse the COVID jabs are forced under threat of fines and imprisonment to stay in their homes. In many nations they are denied access to public transport and some countries have even sought to ban them from grocery stores.

This is tyranny. This is exactly what Hitler did to the Jews. He scapegoated them, denied them freedoms, shamed them publicly. Where are the voices of religious leaders condemning this scapegoating? How can this be going on with most of the religious leadership being silent? It is time to speak up, to condemn the tyranny before it comes for you.