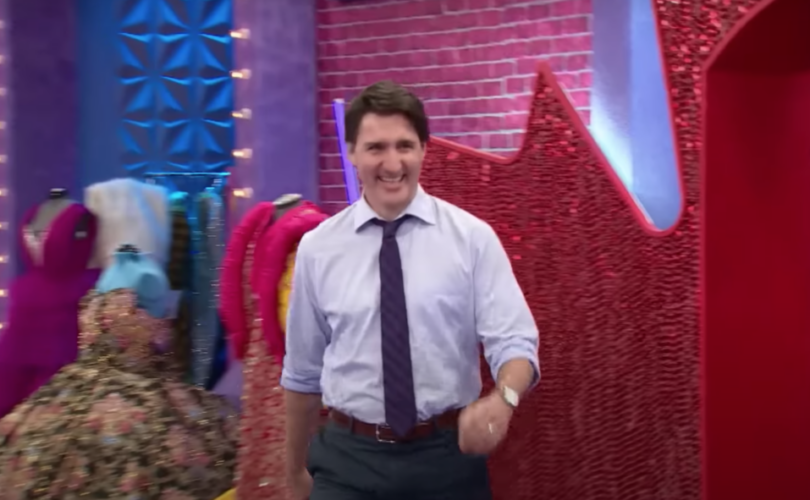 (LifeSiteNews) — As I noted earlier this month in this space, Canadians were again made proud by their costume-loving leader when Prime Minister Justin Trudeau decided to make an appearance on “Canada’s Drag Race,” with the trailer showing him nearly shivering with delight that he could make such a statement. The appearance has now been released online and it was, if possible, worse than one might have thought.

“Can we move beyond tolerate and start embracing, loving and accepting and learning from and being challenged by…that’s how you build a resilient society. That’s what we are trying to do in Canada and we’ve got a lot of work to do.”
PM @JustinTrudeau 🇨🇦 https://t.co/wesXniDuUh

It is clear that these folks are, in fact, Trudeau’s scene. He was delighted to be there – the last time he looked this happy, he was flicking his tongue about and frolicking at the Pride Parade (another much-vaunted prime ministerial first).

“This is groundbreaking,” the head drag queen noted. “The first-ever world leader to visit a drag queen set!” Trudeau, of course, was modest. “I’m glad I’m the first, but I look forward to the time when there’s a third or fourth,” he said gravely.

“Justin, I just want to thank you for being such an ally,” the drag host went on. “You’re the first prime minister to ever walk in a Pride Parade. That’s huge.”

“Thank you, but it has been an incredible pleasure to be part of fighting the good fight on the right side,” Trudeau replied, beaming. “It is about respecting people. Can we move beyond ‘tolerate’ and start embracing and loving and accepting and learning from and being challenged by? That’s how you build a resilient society. That’s what we’re trying to do in Canada, and we’ve got a lot of work still to do.”

“You’re giving me chills!” one of the drag queens noted as the others applauded. Trudeau headed out the door to calls of “hate to see you leave, love to see you walk away!” to which he turned and grinned appreciatively, pointing suggestively back at his catcallers. The prime minister of Canada, ladies and gentlemen.

He left his audience in tears, with one of them noting: “He knows that there’s still work to do. He’s not in denial.”

A few points to make about all this. First, our post-Christian society still uses Christian language – but does so in defence of perversity. Trudeau talks about defending the LGBT movement as “fighting the good fight,” a phrase taken from 2 Timothy 4:7, where St. Paul says that he has “fought the good fight,” finished the race, and kept the faith. Suffice it to say that any previous generation of Christians would have seen this usage as blasphemous.

It is also interesting to note Trudeau’s assertion of inevitability, using the language of being on the “right side” of history. I’ve always thought this to be a particularly arrogant claim considering that the so-called “right side” of transitioning kids, redefining marriage, obscene parades, and drag races has a mere two decades on their side over against two thousand years. Viewed historically, the sexual revolution is a mere blip on the timeline – not a march towards “progress,” if that’s what we’re going to call drag shows.

Trudeau’s speech may have given his audience chills, but there was one aspect of his diatribe that was rather chilling. The LGBT movement conquered cultural territory under the banner of “tolerance” – and once they established dominance, they immediately began to demand affirmation and praise. If you think that is an exaggeration, consider the fact that it is controversial in Canada for a politician – even a Conservative one – to decline attendance at Pride events. They are expected to show up and applaud what they see there. Tolerance is for bigots.

Or as the prime minister put it: can we not “start embracing and loving and accepting and learning from and being challenged by?” And what might that look like? We’re watching it unfold: legislative attacks on Christian institutions, hundreds of millions in taxpayer dollars funnelled into LGBT organizations, and constant condemnation from politicians who target anyone daring to disagree with the LGBT agenda.

So, when Justin Trudeau says he still has “a lot of work to do,” believe him. The worst is yet to come.