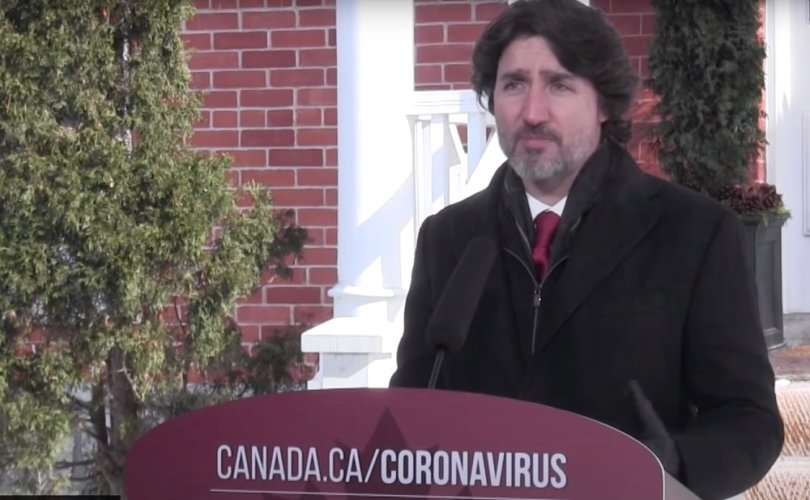 OTTAWA, Ontario (LifeSiteNews) — Justin Trudeau delivered remarks during a press conference (see transcript here) on Monday where he gaslit the participants in the Freedom Convoy and those who support them in a manner historically reserved for authoritarian dictators.

Canada is currently at a crossroads, with the enemies of freedom in the mainstream media working hard to rewrite history and portray a unifying movement as something it is not. If the efforts of Canadian patriots are not successful, Trudeau’s remarks from Monday could go down as the words that thrust Canada into a full-scale Orwellian dictatorship where Pravda-esque messaging defines reality.

The lies that came out of his mouth were so filthy, I felt that I needed a shower after suffering through what he had to say.

Throughout the 30 minutes he spoke to the media — some prepared remarks and some responses to questions — he managed to compare the truckers to Nazis, said that Canadians were “disgusted” with the protest, and intimated that the movement was a violent threat to the safety of Canadians.

Of course, he provided no justification or evidence for his claims, but we shouldn’t expect anything less from such a man. He has routinely shown himself to be the most dictatorial and veritably evil man who has ever led the nation. With a populist movement rising across Canada which has received overwhelming support, it seems that Trudeau is happy to double down on his divisive and vile rhetoric with the seeming intention of destroying the country.

One of the hallmarks of Marxist governance is to accuse the people of the very evils you commit.

For example, if you are a communist dictator, you will accuse the rich of having too much money because they are greedy, and then you will greedily take all of their money away.

Or the Marxist will claim that “corporations” have too much power, and of course the socialist solution is to nationalize the corporations so that the government becomes even more powerful.

Trudeau is a master in this sort of rhetoric, and it was on full display.

“Nazi symbolism, racist imagery and desecration of war memorials” are anathema, Trudeau said, while h he himself has enacted a coercive regime of experimental medical procedures on the population, and has divided the country into the clean and unclean — nothing Nazi about that …

It is Trudeau who has put on blackface more times than he can remember, and he has the strange habit of dressing up in ethnic costumes wherever he goes, making a mockery of cultural customs.

Regarding the desecration of war memorials, Trudeau did more than anyone to stoke the flames of the Black Lives Matter movement, as well as the so-called Every Child Matters movement, which saw statues of Canadian heroes beheaded and toppled, as well as entire churches burnt to the ground.

He said that the freedom movement dishonors “the memory of our veterans.” Is he perhaps referring to the World War II veterans who fought the Nazis, who, as we have said, forces medical procedures on people and segregated a minority of citizens?

“There is no place in our country for threats,” the prime minister said. That is quite the statement coming from the man who takes every chance he gets to threaten his most hated group — the unvaccinated — with further sanctions if they just don’t do what he tells them.

For Trudeau, peace is violence and violence is peace

After his initial remarks, he was asked why he won’t meet with the truckers, even though he met with and attended a BLM protest during the height of lockdown in 2020. After all, he said “Canadians are compassionate, kind, strong and resilient,” which one would think would apply to the truckers as well, that is unless he doesn’t think they are Canadian.

Come to think of it, if the truckers weren’t Canadian, like the convicted terrorist he made sure received $10 million a few years ago, then he might actually like them better than the Canadians he despises so much.

According to Trudeau, he attended the protests in the past where he “agreed with the goals,” but will “not go anywhere near protests that have expressed hateful rhetoric.”

I must have missed the part of the BLM movement that was about peace and unity and love, maybe Trudeau is privy to something that I am not aware of.

There is no evidence that the freedom protests in Ottawa have become violent, although there is a video showing some truckers engaging in an activity where they swing long sticks around on the street. That is, they are playing a game of street hockey.

PEAK CANADA: Truckers have gathered in the blockaded streets of downtown Ottawa to play a game of hockey! How evil! pic.twitter.com/UhLttRtNoW

Maybe the prime minister would meet with the hockey-loving patriots if they used their sticks to break store windows and topple statues of historical figures.

He also used the propaganda session to threaten his political opponents. “This is a moment for responsible leaders to think carefully about where they stand and who they stand with,” he said.

“I think all politicians need to think very carefully about who they’re supporting, about what messages they’re putting out. We have seen over the past many, many months conservative politicians sharing disinformation about vaccines, encouraging conspiracy theories online.”

In addition, he leveled a veiled threat at Conservative leader Erin O’Toole: “And I think Erin O’Toole is going to need to reflect very carefully on how he’s walking a path that supports these people who do not represent truckers, let alone the vast majority of Canadians.”

Well, Erin O’Toole is perhaps the worst leader that the Conservative Party of Canada has ever had, in fact I think he would make Mitt Romney look like a “far-right extremist” in comparison. However, as the Conservative Party is looking to oust its squishy leader, his ministers have made it very clear that they support the truckers and not Prime Minister Blackface.

The Prime Minister’s tactic is to divide, demonize and distract.

All things considered, I believe Trudeau and his Liberals are on a downward spiral. The rhetoric coming out of his mouth is getting so patently absurd and negative, that many people are just tired of it, even if they are socially liberal. People don’t want to be told their unvaccinated son is somehow a biological terrorist when he clearly isn’t.

Even in the fantasy land of public health, where vaccination was the key to getting us out of the “pandemic,” here is a man who is chastising truckers, who he admits are mostly vaxxed, while he isolates at his cottage after testing positive for COVID after being triple-vaxxed. It is stranger than fiction at this point.

He went on a rant about how the truckers are “conspiracy theorists.” It seems to me that the real conspiracy theorist is the man who believes vaccination will end the pandemic when he himself can’t attend work and pretend to do his job because his precious vaccine did not protect him from a COVID diagnosis.

We have a right to be free of Trudeau

I agree with Trudeau here. No one has the right to shut down the democratic process, which is why he should resign for having done so for most of the first year of the coronavirus crisis.

And since there is a right to protest, I fully support the truckers. They should stay in Ottawa until the Canadian government gets rid of this petty dictator.

He is also correct by saying that no one has the right to abuse or harass fellow citizens, which is why Trudeau should stop abusing us with his hateful policies and rhetoric, and our nation should be cleansed of the scourge that is the Trudeau family political legacy once and for all.

We all have a right to be free of Trudeau.