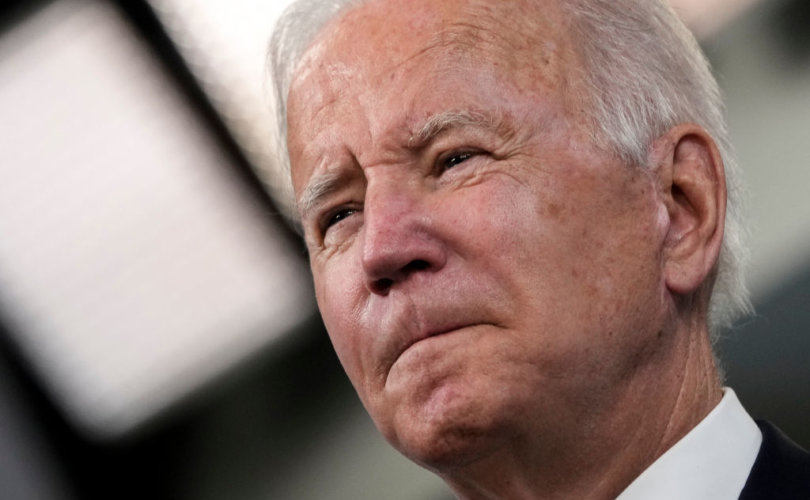 (LifeSiteNews) — Despite the best efforts of our so-called military and political “experts,” fewer than 1 in 6 Americans favor sending U.S. troops into Ukraine should armed conflict break out with Russia. Polling from the Charles Koch Institute shows 73% of Americans prefer their elected officials focus on domestic issues right now instead of on foreign affairs.

This is good news. It indicates Deep State actors posing as intelligence officials on Western media outlets are failing to convince people that the U.S. should involve itself in yet another overseas quagmire.

Most of the people I talk to suspect Ukraine is being used to distract voters from Biden’s failures at home. I think they’re onto something. Massive supply chain shortages, runaway inflation, and a relentless push for vaccines are rightly causing the president’s poll numbers to crater.

All indications point to disastrous midterm elections for the Democrats. And beating the drum of war, while making Putin (instead of Joe Biden) the most hated man in America, could trick some voters into forgetting about the freedom-robbing policies the White House and Congress have been pushing the last year-and-a-half.

One of the strangest arguments I’ve heard in defense of U.S. entanglement in Ukraine was given by Biden’s Deputy National Security Adviser Jonathan Finer on CNN last month. Asked why the American people should care about what’s going on over there, the poor sap said, because “borders should be inviolate” and “sovereignty should be respected.” Who knew the Biden administration was filled with America First patriots?

Finer’s reasoning might sound nice on paper, but it’s not why the U.S. is concerned with Ukraine. For decades, the West has been obsessed with unnecessarily encircling — and provoking — the Russian Bear with NATO expansion. While defending “human rights” and “protecting democracy” is what Beltway elites might say they’re doing in Ukraine, and elsewhere, those with eyes to see and ears to hear (which seems to be most of the voting electorate these days) are aware there’s a much larger game being played that isn’t worth the lives of American boys and girls.

Whatever course of action Joe Biden decides to take, it’s pretty rich to hear his deputy national security adviser talk about national autonomy, let alone cite it as a reason to go to war. After all, isn’t this the administration that’s letting thousands of foreigners walk across America’s southern border with impunity every day? The irony of that was not lost on Donald Trump.

At a rally in Conroe, Texas on January 29, the former president blasted Biden’s glaring hypocrisy on the matter. “Everyone in Washington is obsessing over how to protect Ukraine’s border. But the most important border in the world is not Ukraine’s border, it’s America’s border,” he thundered. “Before Joe Biden sends any troops to defend a border in Eastern Europe, he should be sending troops to defend our border right here in Texas.”

As Trump continues his journey back into the public eye with what appears to be the embryonic stages of his 2024 bid, he’d be smart to make immigration, border security, and anti-globalist policies top-tier campaign themes. He won the Oval Office with that strategy the first time around in 2016 and, as polling data suggests, the American people would support him on those issues again.