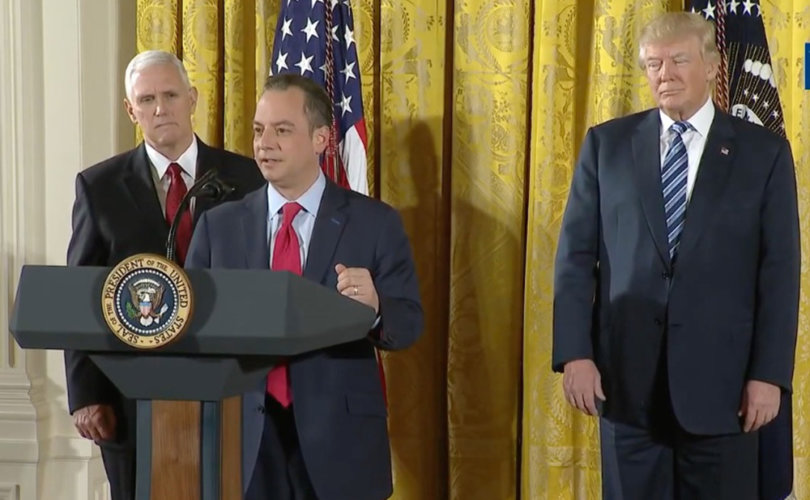 Reince Priebus reads scripture and thanks God "for protecting us".

January 25, 2017 (LifeSiteNews) – I happened to come across a live broadcast of the swearing-in of Trump’s top White House staff Monday. The dignity and intimacy of the event, the strong emphasis on family, and the references to God by President Trump and especially by Reince Priebus, the new White House Chief of Staff, were impressive. This was just the latest manifestation of the new government’s deference to God and respect for the deep faith of many of its senior appointed officials.

After eight long years of practical godlessness of the Obama years, God has thankfully been brought back into the federal government by the Trump administration.

Kellyanne Conway, Trump’s campaign manager and now one of his most senior advisers, has been revealed to be a daily Mass-going, strongly pro-life, pro-traditional marriage Catholic. She places God at the top of her list of priorities as she indicated to the Washington Examiner in a lengthy report about her:

“This,” she says, pointing to everything that is going on around Trump Tower, “is consequential, this is exciting and historic in its own way, but it is nothing compared to the universe in which we live, the God that I worship, and the totality of our lives.”

Conway’s associate and Trump’s Press Secretary, Sean Spicer, is another hardcore pro-life Catholic who has brought a cheerful and dignified presence to the White House Press Secretary position. His entire, one-hour, 18-minute, first official briefing is well worth watching. It is notable that at the very end of that briefing his last words were, “Thank you guys, God bless.” What a refreshing world of difference from the Obama years.

In a January 3 EWTN television interview by Lauren Ashburn Spicer, he revealed that he openly brings his faith to work with him every day and looks “to God every day to give” him “the strength to do what’s right.”

The president’s been very clear on his stance on life and we are going to make sure that we are a very pro-life administration.

Coming from a family of faith, you mentioned not just me but you also mentioned Kellyanne, but a lot of others in the campaign, who have faith backgrounds of different religions, I think that helps how you make decisions and guide your priorities. We have Reince Priebus who is Greek Orthodox, Steve Bannon is a Catholic, there are a lot of folks in the senior administration who are very proud of their faith and their religion and it’s going to help guide us to do the right thing for this country.

Ashburn next asked, “How is your faith going to help guide you?”

I’m going to look to God everyday to give me the strength to do what’s right and that’s all you can ask for is to get up and say can I do the right thing, help guide me and ask Him for strength and that’s what I’ll do everyday. I’m humbled to have this position, it’s an honor, we don’t know what God’s plan is at any time but we know He has a plan for each of us and I’m honored that He has chosen me to be part of this administration and serve this nation to hopefully make it a better place.

I had to pinch myself to see if I was dreaming. This was the press secretary of the White House saying such wonderful things? Talk about night and day change from one administration to another.

I could not help but notice that when retired Marine General John Kelly was sworn in as secretary of homeland security he made the sign of the cross at the end of the oath. Clearly another committed Catholic Christian.

Back to the Monday swearing-in ceremony for White House staff. In his remarks before the ceremony, President Trump expressed his confidence in his staff and ended by saying:

Then committed evangelical Christian and Vice-President Mike Pence conducted the swearing-in ceremony in a notably gentle and reverent manner. This was followed by the closing remarks of White House Chief of Staff, Reince Priebus. See video of Priebus remarks below. (The full 12 ½ minute video of entire swearing-in can be seen here.)

I found the remarks by Priebus to be especially surprising and reassuring. He stated:

When I walked into my office this morning there was a verse on my desk that’s from Isaiah 40:31 – ‘Those who hope in the Lord will renew their strength, they will soar on wings like eagles, they will run and not grow weary, they will walk and not be faint.’

It is our duty to serve with character and integrity and to support President Trump as he places the interests of the American people first and everything that he does…and finally I want to thank God and ask for His protection over us as we serve President Trump, Vice-President Pence and our beloved country.

“Character and integrity” seems to describe most of those appointed to the Trump administration, especially those in the White House room that day.

Yesterday, I discovered an article about Trump’s newly confirmed CIA Director, Mike Pompeo, an evangelical Christian and “staunch pro-life advocate.” He is quoted at a recent Christian event urging believers to “pray and stand and fight and make sure that we know that Jesus Christ is our savior and is truly the only solution for our world.”

This was said by the new director of the CIA! Consider the implications of that.

Who would ever have believed that the United States would suddenly, after all those horrible Obama years, have such admirable and highly principled persons placed into many top positions in its government?

I have mentioned only a handful of Trump’s appointees in this article. There are undoubtedly many more with similar beliefs and high character now in important government positions, with more to come.

It is going to be an astonishing next four-to-hopefully-eight years in America. It appears we have much to look forward to, but we also are called to action.

Our first role is to pray for President Trump and all those around him. I have never witnessed such widespread, intense and irrational hatred towards a political leader sincerely trying to do the right things for his nation.

Secondly, we must do whatever we are capable of to support every good measure that the Trump administration proposes and enacts. The backlash from the US and international left is going to be like nothing that we have ever seen before.

The battle has only begun. The election was just the preliminary stage.

President Trump: ‘We will be protected by God’