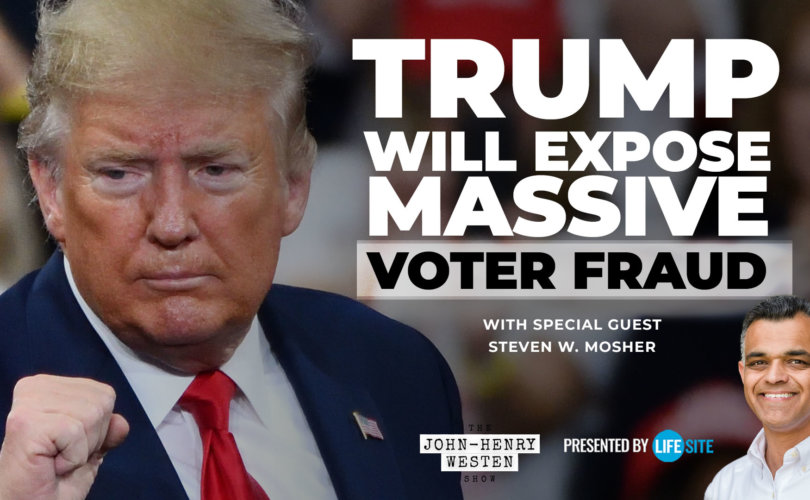 November 13, 2020 (LifeSiteNews) – Steve Mosher told me today in a blockbuster interview that President Trump is gathering all the evidence needed to show massive, widespread voter fraud occurred in the 2020 presidential race.

“They picked on the wrong guy to try and bulldoze,” he said.

The mainstream media is engaging in a “bloodless” coup attempt on the president, he added, who won by huge margins in key swing states but was denied victory thanks to “old school” and new, high-tech methods of voter fraud.

Continuing on, Steve explained that, “they're not just trying to steal the election. They’re trying to steal our country…if they succeed in the massive election heist that's currently underway, we'll never have another free and fair election in this country, I'm afraid.”

“Don't listen to the mainstream media now,” he remarked. “I'm very disappointed in Fox…because the word came down from Rupert Murdoch and his sons that they were going to shift sides and they've shifted sides in a big way. They've been part of this coup attempt too.”

Steve is an expert on China and global affairs. He’s been in touch with the president’s team on a daily basis. People in the White House know that Trump won, he said, because the numbers that came in on election night were massively in his favor. But the Democrats didn’t expect such a huge difference, so they had to shut down the counting and bring in phony ballots and switch votes electronically to make up the gap.

“The other thing that’s probably hard for people to understand is, is how massive, how absolutely massive the fraud has been. It has encompassed every possible kind of the old school ballot fraud [but now] we have the 21st century voter fraud. These computer voting systems…enable an entirely new way of cheating on the vote.”

I asked Steve how the left carried out the fraud specifically.

“Why didn't Hillary Clinton challenge the voting results in 2016?” he asked. “Because she knew that if she did, the voter fraud that they had attempted at that time would be revealed.”

Steve urged Americans to not only pray for the president given that this is the worse crisis in our country since the civil war – and given that violence may break out when he is ultimately declared the winner – but also that they stay calm and reject the lies of the corporate news networks.

“The mainstream media has betrayed us. They're part of the coup attempt, this bloodless coup that they attempted that is going to fail. And they're the Titanic, you know. New media like The John-Henry Westen Show that we're doing right now where you have a couple hundred thousand subscribers, you will have more as time goes on because people are looking for the truth and they won't find it on MSNBC and CNN. We've known that for a long time, but they also won't find it on Fox, but they will find it here. John Henry, so I'm grateful to you for doing this.”