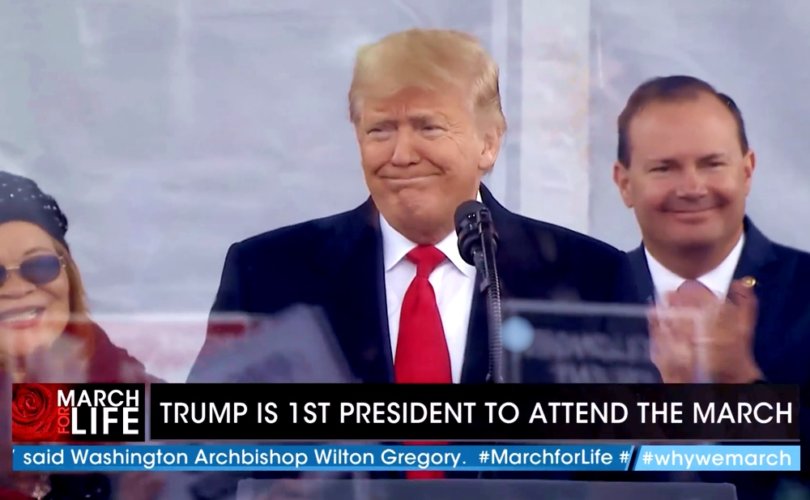 January 27, 2020 (LifeSiteNews) – On the heels of the most successful March for Life in recent memory, pro-lifers were in a celebratory mood. After all, for the first time in history, a sitting American president had addressed the assembled throng.  His presence spoke even louder than his words, and his words were among the most powerful ever spoken on behalf of life.

“All of us here today understand an eternal truth: Every child is a precious and sacred gift from God,” said President Trump. “When we see the image of a baby in the womb, we glimpse the majesty of God’s creation. …Every person is worth protecting and, above all, we know that every human soul is divine and every human life born and unborn is made in the holy image of almighty God,” he added.

When Trump said, “Unborn children have never had a stronger defender in the White House,” I nodded.

In my opinion, the President has made a good faith effort to fulfill each and every pro-life promise that he made to us as a candidate back in 2016, bar none. No other president, not even Ronald Reagan, has done as much to end the assault on the unborn as Donald J. Trump, period.  From Supreme Court justices to ending the abortion mandate, from reinstituting the Mexico City policy to cutting funding for Planned Parenthood, he has delivered on every front.

And yet there are still some who are not satisfied.  Take Tom Mirus at Catholic Culture, for example.  “It was a minor political victory to have an American President address the March in person for the first time,” conceded Mirus. “But Donald Trump polarizes more than he inspires conversion.”

A minor political victory? I wonder what would a major political victory be?  Whatever you say about the man, Trump leads from the front, not from the safety of the Oval Office. I wonder if Mirus actually listened to the speech, which I found inspiring in substance and convincing in tone. Trump clearly was not just reading his lines, but speaking with real conviction.

As far as the claim that Trump is “polarizing,” that is a good thing, not a bad thing. In order to win the battle for Life, we need to outline what is at stake so clearly and poignantly that people are forced to take a side on the most important human rights issue of our day.  We need to ask them, “Do you support the killing of the unborn throughout all nine months of pregnancy or do you believe that every child is made in the image and likeness of God.”

That’s what Trump does. Unlike an ordinary politician, who is always hedging and equivocating, he speaks in simple, declarative sentences, leaving no doubt about where he stands on the issues.  And on the issue of life, he is with us, without a doubt.

I suppose that Mirus would say that he doesn’t like the President’s style.  But what does that matter in the grand issue before us?  Trump may be a brash New York businessman, but he’s our brash New York businessman. We need to ask the style critics whether they would prefer losing with style to winning.  Because that is, in effect, what they’re saying with their continued criticism.

I don’t know about you but as for me, having been in the pro-life arena for forty long, often frustrating years, I want to win. And I believe that we finally have a president who is just as committed to winning the battle for life just as we are.

The style critics need to get over themselves and to get on board the Trump train. We are not here engaged in a polite civics debate over whether to install a traffic light on Main Street.  We are engaged in a great struggle to determine whether millions of our unborn brothers and sisters will be sentenced to death by unjust laws.

We are providentially on the cusp of a generational opportunity to finally end the slaughter of the innocents in America. We have the opportunity in November to not only re-elect a pro-life President, but also to elect a pro-life House and a pro-life Senate. This in turn will lead to the appointment of one or two more pro-life justices to the Supreme Court and virtually ensure that Roe v. Wade will be overturned.  Such an opportunity may not come again in our lifetime.

The other side certainly understands this. That is why they have almost stopped masquerading as health care providers and are pushing at the state level for the legalization of abortion throughout all nine months of pregnancy, even up to birth.  That’s why they are pushing for the continued killing of babies born after a failed abortion.  And that’s why Planned Parenthood alone is spending 45 million dollars to defeat Donald Trump and elect a candidate who will continue to support what is, in fact, the biggest killing machine in American history.

The battle lines have been drawn.  On the one side are the majority of Americans. On the other looms the collective might of Manhattan and Hollywood, of the mainstream media and the Washington swamp, of the deep pockets of Planned Parenthood and bloody-minded billionaires like Michael Bloomberg and Warren Buffet.

The Party of Abortion understands that President Trump is the enemy. That’s why it will be spending hundreds of millions of dollars to defeat him. That fact alone should make us redouble our efforts to ensure that his re-election. The saying, ‘The enemy of our enemy is our friend’, has never been truer.

Our friend, our champion, is Donald Trump.

Anyone who claims to be pro-life and who is still standing on the sidelines at this critical moment in the history of the pro-life movement is either a fraud or a coward.

Anyone who does not stand with the most pro-life president in American history—the one who is key to ending the slaughter of the innocents once and for all—is, quite simply, betraying the babies.

The coming election will decide the fate of millions of American babies for years to come. During Trump’s second term, God willing and with the support of a pro-life majority in Congress, we will finally end a greater evil than slavery: the killing of the unborn – If there is a second term.

The battle lines are drawn—polarized, if you will—more clearly than ever before.  Our champion is Donald Trump.  You are either with us as we go forth into battle, or you are against us. There is no middle ground; no place for the merely lukewarm.

The choice is literally between Life and Death.  Choose Life so that millions of unborn Americans may live.