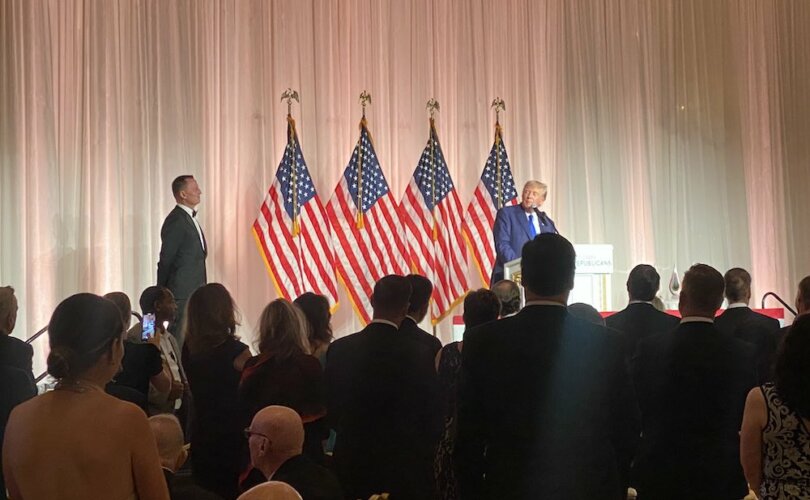 Here’s the thing: Instead of celebrating the passage and enactment of the new law, President Trump and Kari Lake should’ve seized the opportunity to renounce it.

And instead of congratulating the 500 or so “GayCons” gathered in Mar-a-Lago’s ballroom, Trump and Lake should’ve asked these men and women to show that they truly are conservatives by affirming the immutable definition of marriage – as conjugal and complementary – and repudiating RMA.

Although Trump reportedly did not mention the new law in his speech, he did proclaim, “We are fighting for the gay community, and we are fighting and fighting hard.”

“With the help of many of the people here tonight in recent years, our movement has taken incredible strides, the strides you’ve made here is incredible,” added the former Republican president and declared 2024 candidate.

According to Politico, Kari Lake employed foul language to address the crowd, saying, “We just had such a huge movement going into Election Day, to watch these people — these evil b*stards, can I say that here? To watch them steal this election in broad daylight, and if they think they’re going to get away with it, they messed with the wrong b*tch.”

Among the other presenters and award recipients at the LGBT GOP gala were outgoing U.S. Senator Rob Portman, a Republican who defected from social conservatism to become one of 12 GOP Senators who voted for the RMA, and Newsmax host Rob Schmitt, formerly of Fox & Friends First.

“The Log Cabin Republicans attacked Matt Rinaldi for faithfully representing the socially conservative views of Texas Republicans. They launched a full-court press to demonize Rinaldi but it failed,” wrote Pedro Gonzalez in a long Twitter thread  critical of the Mar-A-Lago event.

“These are the people Trump is hosting.”

“The purpose of the Log Cabin Republicans is to move the GOP further left on the sexual revolution, to browbeat the socially conservative grassroots scene with LGBT nonsense—and Trump is acting as their *vehicle*,” he noted.

This is correct: the purpose of the Log Cabin Republicans is to move the GOP further left on the sexual revolution, to browbeat the socially conservative grassroots scene with LGBT nonsense—and Trump is acting as their *vehicle*. https://t.co/MAWP5wudZ9

It’s not just that Trump is indistinguishable from Biden on this issue, it’s that he is elevating the Log Cabin Republicans and LGBT ideology to a level it has never seen on the right.

The Log Cabin Republicans tried to destroy a grassroots Republican movement in Texas because it was too socially conservative—and Trump hosts them at his Winter White House to celebrate “gay rights.”

Does it feel like that’s what we need right now? More LGBTism?

The Log Cabin Republicans tried to destroy a grassroots Republican movement in Texas because it was too socially conservative—and Trump hosts them at his Winter White House to celebrate “gay rights.”

Does it feel like that’s what we need right now? More LGBTism?

“Tell me one more time that Trump is not the most pro-gay President in American history,” tweeted Gala attendee David Leatherwood.

President Trump delivers remarks to a room full of 500 gay Republicans at his house, Mar A Lago.

Tell me one more time that Trump is not the most pro-gay President in American history 🇺🇸 pic.twitter.com/lM1jmWsKXu

“One cannot simply be MAGA, one must be ULTRA MAGA,” wrote Leatherwood in another tweet, featuring an oddly posed picture with Kari Lake and others.

One cannot simply be MAGA, one must be ULTRA MAGA 🇺🇸 pic.twitter.com/UZzX8uQRPI

Like most of the Mar-A-Lago gala attendees, I am same-sex attracted. However: I disagree with the amassing of political power by LGBT forces, all of which are leading the country down a path to cultural Marxism.

If there is going to be a reawakening of conservatism in our nation, it is in large part going to have to be led by those of us who experience same-sex attraction rejecting homosexuality and calling for Obergefell to be overturned. We must pave the way to restore marriage and family, to reestablish timeless principles and immutable definitions, and to reopen the public square for the proclamation of truth.

We need to be intellectually curious and intellectually honest enough to judge our own lives and consider what role we have played or may be continuing to play in the liberal world order as it morphs into Woke Neo-Marxism.

Personal autonomy is a good thing within limits, an important component of human dignity and happiness, but clinging to personal autonomy to justify continued behaviors and policies which ultimately erode society by unraveling the fabric of marriage and family life – and which have led to the un-defining of man and woman, husband and wife, boy and girl, son and daughter – is to collaborate with objective evil.

This is a message many of us do not want to hear. But it is a message we need to hear. Hopefully it’s one each of us can begin to consider, then embrace. The future of our country and the western world depends on it.

There is no rationale – NONE – for acknowledging or surrendering to a law that enshrines something evil that is not real, that does not actually exist, and can never come to be. Homosexual “marriage” is not a real thing; It is an unserious thing.

And yet Donald Trump, Kari Lake, and a large cadre of GOP members of Congress have done just that. They benightedly continue to congratulate themselves and pat each other on the back for their role in undoing the most important institution known to humanity.