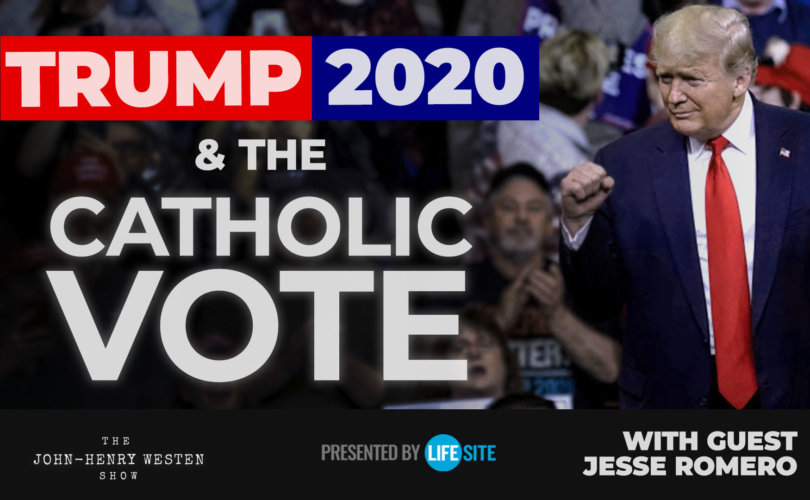 April 24, 2020 (LifeSiteNews) – Everyone knows by now that President Trump can be vulgar and degrading to others, and that for many years he lived an immoral lifestyle. Popular Catholic apologist Jesse Romero, the author of a new book that encourages Catholics to vote for Trump in 2020, told me on my podcast today that he’s “not that concerned with” how Trump speaks. Rather, he’s “more worried about how he legislates.”

Romero’s newest book, “A Catholic Vote for Trump: The Only Choice in 2020 for Republicans, Democrats, and Independents Alike,” is available for sale by TAN Books. A retired Los Angelus deputy sheriff who has spent years doing boxing and karate, Romero is a passionate Catholic apologist who fell in love with the faith while spending time with the charismatic movement in the 1980s. As you’ll see in our conversation, he’s enthusiastic about everything he does.

Romero is a first generation Mexican-American. He confessed to me that Donald Trump was “the last” candidate he had in mind during the 2016 Republican primary. But, over the last three-and-a-half years, that's completely changed for him.

“Jesus says you can know a tree by their fruits,” he continued. “The fact of the matter is you can see there's been an evolution of thought in this man's life and an evolution of his interior life, as well as by the enemies he keeps…witches, Satanists, Planned Parenthood, communists, socialists, Islamic terrorists, anarchists…everybody that hates President Donald Trump hates Jesus Christ and hates the Catholic Church.”

Romero has written many books before, including “Catholics, Wake up! Be a Spiritual Warrior,” in 2014. He’s also a radio host and well-known Catholic apologist.

He and I talked about how in 2016 Pope Francis and then-candidate Trump were in the news for their remarks on whether or not walls and borders were a good thing. I also asked Romero what he had to say to those Catholics who think Trump is just putting on an act and what he makes of their concerns with his support for homosexuality.

“I'm just expecting them to govern in such a way to get out of the way of us as Catholics and respect our religious liberty and allow us to freely practice and evangelize. And he's done that and he's set up the atmosphere for that.”

As far as Trump’s views on homosexuality goes, Romero said Trump’s not perfect on that issue but that “many” gay activists are “very angry with President Trump…he's taken a lot of flack by the LGBT community.”

“I see him as a kind of parallel of the Emperor Constantine,” he said.

Listen to the full interview by clicking below.