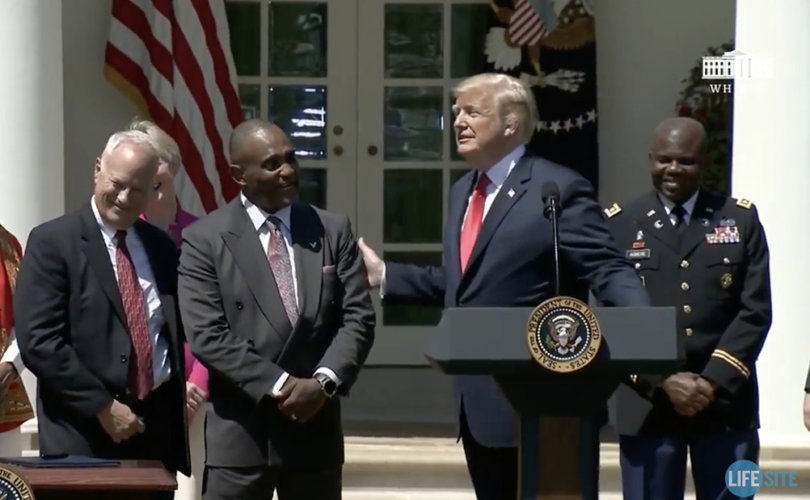 WASHINGTON, D.C., June 15, 2018 (LifeSiteNews) – I have rarely experienced one person being so deeply hated and despised as has President Donald Trump been hated since his election. Even many supposedly good Christian people extend no charity whatever to the man because they simply cannot stand him.

I wonder what Our Lord, the one who has ordered us to love our fellow man as ourselves and to forgive and pray for our enemies thinks of all this ongoing rage against a leader who is the most pro-life president in generations and repeatedly speaks of God as Trump did on the National Day of Prayer early last month,

I came across this video on Facebook a few days ago and felt I had to share it. To me it is an uplifting video of a president that just cannot possibly be acting or exploiting the good will of Christians considering how sincerely he talked about God during this event.

Watch the four-minute video and then tell me that you still hate the man or despise him.

He brings up to the podium a living example of the power of prayer, John Ponder, a repeat criminal who was arrested for Bank robbery and then experienced profound personal conversion partly as a result of one morning waking up in prison and hearing the voice of “the great Billy Graham”.

“Reverend Graham’s words came through the air ways – Jesus wants to be the Lord of your life. That night John dedicated his life to Christ. He spent the rest of his time in prison praying, studying the bible and bringing the Lord to his fellow inmates. The day after his release John received a visitor. It was the man who put him in jail, FBI special agent Richard Beasley. (He was there and Trump invited Beasely to come up to stand beside Ponder)”

Trump said, “Beasely told John that I want you to know that I have been praying for you. The two are now life-long friends. John now runs a ministry that has helped more than 2,000 former inmates rejoin society.”

“John and Richard, you are a living testament to the power of prayer. Your story reminds us that prayer changes hearts and transforms lives. It uplifts the soul, inspires action and unites us all as one nation under God. So important and we say it here. You know, a lot of people, they don’t say it. You know what, they’re starting to say it more just like they’re starting to day Merry Christmas when that day comes around. You notice the big difference between now and two or three years ago. It was going in the opposite direction rapidly. Now, it’s straight up. Our country was founded on prayer, our communities are sustained on prayer and our nation will be renewed by hard work, a lot of intelligence, and prayer.”

Nothing, just nothing like this every happened during the spiritual wasteland years of the Obama presidency.

President Trump to pro-life movement: ‘I have kept my promise’