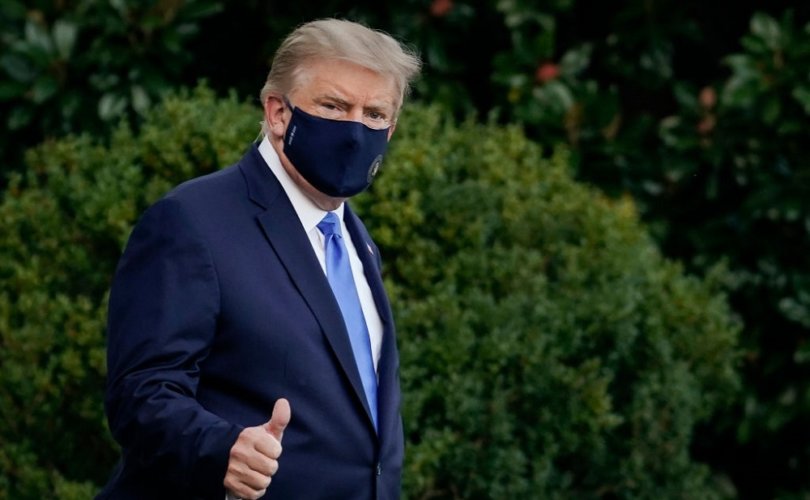 October 2, 2020 (LifeSiteNews) — I am following the little information we have so far about how President Trump and his wife Melania are being treated for their Wuhan virus infection. I find it alarming that Trump is not being treated with the protocols that numerous physicians have been successfully using for their COVID-infected patients. What on Earth is going on?

Trump's physician is quoted in Breitbart News saying, “The president received a single 8 gram does of Regeneron’s polyclonal antibody cocktail as well as zinc, Vitamin D, famotidine, melatonin, and a daily aspirin.” That’s all?

Breitbart states the Regeneron polyclonal antibody cocktail “is being studied in four late-stage clinical trials and its safety and efficacy have not been fully evaluated by any regulatory authority.” That is not at all encouraging.

Why are they using a drug for “late-stage trials” when Trump is frequently tested, was only just found to be positive and is in an “early stage” of the disease that logically calls for Hydroxychloroquine plus zinc and an antibiotic that produces excellent results in early stages?

He should have immediately been put on the hydroxychloroquine protocol that the Frontline Doctors, epidemic and anthrax specialist Dr. Meryl Nass, renowned Yale professor of epidemiology Dr. Harvey Risch, U.S. doctor Stephen Smith and numerous doctors in other nations, doctors in India, the renowned French professor Dr. Didier Raoult, professor Dolores Cahill, and many more — all insist the evidence is “overwhelming” that this protocol is amazingly effective in correct, early use treatment of COVID-infected patients.

It is reckless that this is not being done because there is no risk to giving it to Trump even if the medical bureaucrats still ridiculously refuse to believe that Hydroxychloroquine is effective. I mean, how many thousands more lives have to be saved and how many thousands more people have to personally testify that they would not still be alive but for the courageous, caring doctors who went out on a limb and gave then this drug, before these stubborn bureaucrats finally get out of the way of real medicine?

Hydroxychloroquine (HCQ) has a 65-year record of exceptional safety and is considered to be less dangerous than aspirin or Tylenol. The African continent has an unusually low COVID death rate. What none of the media is telling you is that the cause of this low rate is that HCQ is very commonly used and available over the counter, without a doctor’s prescription, in Africa for malaria prevention.

There was yet another study that came out yesterday claiming that HCQ is not effective for COVID treatment. That study can’t possibly be accurate, or else the large number of doctors regularly saving patients with HCQ are all liars and their very alive, previously infected patients don’t really exist.

Every single study so far that has claimed that the HCQ protocol is either ineffective or dangerous has proven to be a fake study. Three of the most prestigious medical journals in the world have published such trash. Two retracted their “peer-reviewed” studies (which was unprecedented) and the third still hasn’t yet retracted a bad study against HCQ even though a criminal investigation is underway against its authors.

Such retractions of any such “studies” or articles should always be expected because the numerous physicians correctly using the protocol have had spectacular success treating real patients every day. The fact that HCQ was suddenly suppressed in the US, Canada and many European nations since near the beginning of the pandemic, after several decades of no suppression, is criminal.

Some people should be charged and jailed for what they have done on this and a number of physicians have called for just that action. There are already some ongoing criminal actions and lawsuits related to this unjust, very harmful suppression.

That suppression has has cost possibly hundreds of thousands of lives, and I don’t want to see its suppression also cost the life of the president of the United States or his wonderful wife.

Every hour and day that giving this treatment for Trump is delayed makes it more likely that HCQ will not be able to help him. It has to be given early in the infection.

Some doctors have also been having great success using another inexpensive treatment being promoted by U.S. Dr. Richard Bartlett. He has been using a 20-year-old, reliable medication treatment for over 1,000 of his COVID-infected patients with 100% effectiveness. It involves an economical, Nebulizer-delivered, inhaled Budesonide steroid normally used to treat asthma. Some doctors have been using both the HCQ protocol along with the Budesonide steroid where both might be warranted.

In both cases, the intent has been to quickly treat the virus before the infection worsens and the patient has to go to a hospital. That’s called outpatient treatment.

Trump should never have had to go to Walter Reed Hospital. He should also have continued to take the prophylactic dose of HCQ that he was on for about a month some time ago and for which he was severely criticized by Democrats, the media and others who simply despise everything that he does. He is an obvious candidate for the daily prophylactic dose given his age, heavy weight and the many large events he attends and many people he is always meeting.

It appears that someone got to the president and convinced him to discontinue taking the Hydroxychloroquine. That really worried me. It is highly likely he would not have received a positive test if he had continued the low, very safe preventative dose along with a daily capsule of zinc, vitamin D and a few capsules during every day of vitamin C.

It is criminal that neither of these well-proven-in-practice medications are being heavily promoted and that all restrictions or bureaucratic discouragements against them have not been removed.

Dr. Simone Gold, the founder of the Frontline Doctors group, has said there has been “shocking, deep corruption and deception that has resulted in desperately needed, life-saving COVID infection treatments being suppressed since the pandemic began.” She, along with other doctors, has called this a “criminal” “massive disinformation campaign” against the life-saving ability of hydroxychloroquine to cure the Chinese coronavirus.

Contact the White House to ask why the president and Melania are not immediately being given this well-proven-in-practice medication protocol for COVID infection.

Report: Other countries faring better against COVID due to hydroxychloroquine, not lockdowns

This Indian slum contained a possible COVID-19 disaster with hydroxychloroquine