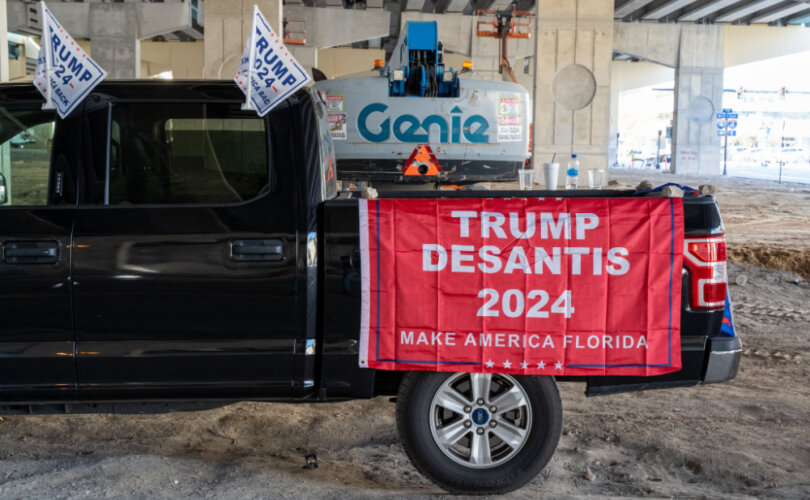 (LifeSiteNews) — The race is on for 2024. Will Republicans support Donald Trump or will they jump ship and embrace Florida Gov. Ron DeSantis? Before diving into that hornet’s nest, I want to perform a brief autopsy of the 2022 midterms, as the two topics are deeply interconnected.

Leading up to Tuesday, 75% of voters said the country was on “the wrong track.” What’s more, most voters said their top concern was the economy and inflation. If that’s true, why didn’t Democrats get kicked to the curb en masse, as polls suggested they would? Why didn’t Trump-endorsed candidates perform better?

First, let me say that it’s entirely possible — even likely — that massive vote rigging took place. I mean, if the left stole the election in 2020, it’s not unreasonable to think they have no scruples about doing that again, and that they’ve figured out ways to do it in certain areas without getting caught.

Seriously, are we really supposed to believe stroke victim John Fetterman received 2.7 million votes for the U.S. Senate? Pennsylvanians just elected a dead guy to their statehouse for crying out loud. The state still has voting laws implemented during COVID-19 that give Democrats a massive advantage. I’m not certain anyone with an (R) behind their name would’ve won that Senate seat.

Arizona, meanwhile, is still counting votes nearly four days after the election. Are we to think that there’s absolutely no funny business going on there, especially given what a Kari Lake and Blake Masters win would mean not only for the America First movement but for Donald Trump’s 2024 presidential bid?

Who is at fault for the GOP’s disappointing performance?

After poring over social media for the last couple of days, it’s apparent to me that there’s two schools of thought about who’s to blame for the “red wave” debacle.

Former Trump adviser Stephen Miller, Fox News host Tucker Carlson, and others blame GOP leadership for misallocating resources and for not supporting MAGA candidates when they needed it the most. The evidence they’ve provided seems to be quite strong, and even raises the troubling question whether Senate GOP Leader Mitch McConnell, House GOP Leader Kevin McCarthy, and RNC Chair Ronna Romney-McDaniel purposefully sabotaged the midterms to take the wind out of Trump’s sail heading into 2024.

Kevin McCarthy spent close to $10 Million going after me, Joe Kent, and 6 other Republicans in their primary elections

McCarthy is a failed disgrace & must NOT become Speakerhttps://t.co/1ElP7CGP2W

Blake Masters is in a race to the finish with Cartel Kelly. If Mitch had spent in Arizona — instead of blackballing Blake and funneling money in Alaska to defeat the de fact GOP nominee — Blake would have already won handily. This was a deliberate choice.

The other chorus of voices — most of whom are Beltway neocons and Never Trumpers — point the finger solely at the former president. They’re now engaging in what appears to be a coordinated effort, similar to 2016, to pull the party back to the disastrous Bush-era policies.

Globalist Paul Ryan appeared on Fox News today to call Trump a “drag” on the party. Former Vice President Mike Pence published an op-ed in The Wall Street Journal detailing his last days in the Trump White House. Pence is scheduled to appear on CNN for a town hall next week. I wouldn’t be surprised to see him speak about the need for Republican voters to have “a choice” when it comes to the 2024 presidential race.

If you’re not paying attention, the swamp is running a coordinated campaign, pushing dishonest talking points about Donald Trump. Winsome Sears, who was propped up by the MAGA movement, is the latest to get gobbled up.

At the end of the day, there’s plenty of blame to go around. Trump is, never has been, and never will be, a polished politician. He has good but also very bad instincts. It was a mistake for him to back quite a few of the people he did, especially the pro-abortion celebrity Dr. Oz. But Trump was not on the ballot this year and he didn’t campaign in all the districts he endorsed candidates in. Further, the messaging put out by GOP leadership wasn’t all that coherent. Can anyone honestly say they knew what Republican top brass was telling voters they were going to do to fix the economy?

A number of factors were at play in the midterms

It’s important to recall that some of the candidates Trump endorsed were forced on him by The Swamp itself, and that his support for more than a few of them was akin to a formality.

Here in Michigan, Tudor Dixon — a political pundit who voters never even heard of before — was the hand-picked choice of Betsy DeVos, Trump’s former Secretary of Education. She beat out a field of grassroots candidates in the primary thanks to DeVos convincing Trump to endorse her. Dixon eventually lost 55%-44% to the eminently beatable Gretchen Whitmer.

In Michigan’s 3rd congressional district where I live, vocal Trump supporter John Gibbs was defeated by a wide margin, but the district had just been redrawn in 2021. It ended up +3% for Democrats before the race even started. The likelihood that a Pence-backed or DeSantis-backed Republican would have won — or will win here in 2024 — is slim to none. Michigan is simply trending back to its Democratic roots. Don’t expect it to support a Republican in the next presidential race, especially given the passage of “Proposition 2” that allows more early voting access, favoring Democrats.

It’s worth mentioning that we live in a very strange time politically. Voters today have never witnessed a former one-term president who wasn’t in office campaigning for candidates. It’s therefore quite difficult to gauge if Trump’s endorsement-to-victory ratio is a massive disaster or not. After all, the GOP is leading Democrats in total turnout by nearly 6 million votes. That’s an impressive feat if you ask me.

Having said that, it’s undeniable that the abysmal track record of Joe Biden and Congressional Democrats should have resulted in Republicans dominating this election cycle. They didn’t. But, again, how much of that failure can be placed on a man who isn’t even up for election and didn’t insert himself into every race?

Furthermore, high turnout rates among young, pro-abortion women, mixed messaging by poor quality candidates, longshot races in Blue states, and other factors outside Trump’s control (and expertise) diminish his blame, at least in some ways.

Steve Bannon acolyte Raheem Kassaam summarized his side of the aisle’s argument quite well when he published the following on his Substack blog:

“If you accept that Republicans should have done better in this cycle, you have to go to the source of where the decisions are made and how the money is spent. That’s in the hands of people like Kevin McCarthy, Tom Emmer, Mitch McConnell, and Ronna Romney McDaniel. Trump isn’t a “party leader” in a European political sense. He wasn’t on the ballot this year. He doesn’t control the purse strings, nor the hires inside the GOP. His philosophy is ultimately beholden to centralized implementation.”

Who will decide the GOP nomination?

Going forward, the battle for the 2024 Republican nomination will be waged on cable news, conservative media outlets, and in Congress, just as it was when Trump first ran in 2016.

California Representative Kevin McCarthy looks like he’ll be the next Speaker of the House. But the highly-disciplined, highly-organized, pro-Trump House Freedom Caucus — which counts Marjorie Taylor-Green and Matt Gaetz as members — is going to pressure McCarthy, who is owned by Big Tech, to track to the right every chance they can.

Conservative Rep. Jim Banks is already lobbying to be the next majority whip, in opposition to RINO Tim Emmer from Minnesota. The Freedom Caucus is holding a member-only orientation over the next several days. Tucker Carlson will be the keynote speaker at that. Look for pro-Trump representatives in the House to make their opposition to establishment Republicans loud and clear over the next two years.

In the U.S. Senate, Trump-backed newcomers J.D. Vance and Ted Budd (and potentially Adam Laxalt, Blake Masters, and Herschel Walker) can all pose a threat to Mitch McConnell’s desire to move beyond Trump in 2024. Watch to see how McConnell, who should be removed from leadership, handles these America First freshmen. I imagine it won’t be pretty.

DeSantis blew the competition away while much of the rest of the Republican Party underperformed. What exactly is the argument against DeSantis 2024?

.@benshapiro: “Ron DeSantis won his 2018 gubernatorial race by 30,000 votes…The state of Florida is now entirely red…For Republicans who are thinking about the future…you might want to consider that in determining who you choose to run for president in 2024.” pic.twitter.com/Cm1qH3uuo1

Their collective argument — which is very strong, mind you — posits that DeSantis is a more effective (and more disciplined) executive than Trump. DeSantis has not only taken on Disney, the LGBT movement, and woke school boards pushing Critical Race Theory, but also COVID lockdowns and other culture war issues. He successfully navigated Florida through the most recent hurricane and appeals to a broad swath of voters. He doesn’t have half the baggage as Trump does either. Will grassroots culture warriors buy what Shapiro Inc. is selling? It wouldn’t surprise me if they did.

Lastly, Never Trump corporate news outlets are chomping at the bit to leave him for dead. Be on the lookout for NBC, CBS, and others to promote establishment Republicans who want to throw Trump overboard in the weeks and months ahead.

My long-term guess is the mainstream media will jump onboard the DeSantis (or Pence) bandwagon. If and when that happens, we should ask ourselves why these groups, supposedly at odds with one another, are unifying around a particular candidate. We should then seriously reflect on whether there might be something else going on. As Sebastian Gorka, a former adviser to President Trump, has tweeted, this is already occurring to an extent with Governor DeSantis.

To all those “Republicans” crowing about how it has to be DeSantis, and not President Trump in 2024, just know this:

and every Bushie agrees.

Whatever the future holds for the Republican Party, we should put our trust in God, not in men. Only Christ can deliver us from the evil seeking to ensnare us. Politics is downstream from religion. We should get right with God first and know that we can only do as much as we can and that He’ll handle the rest.