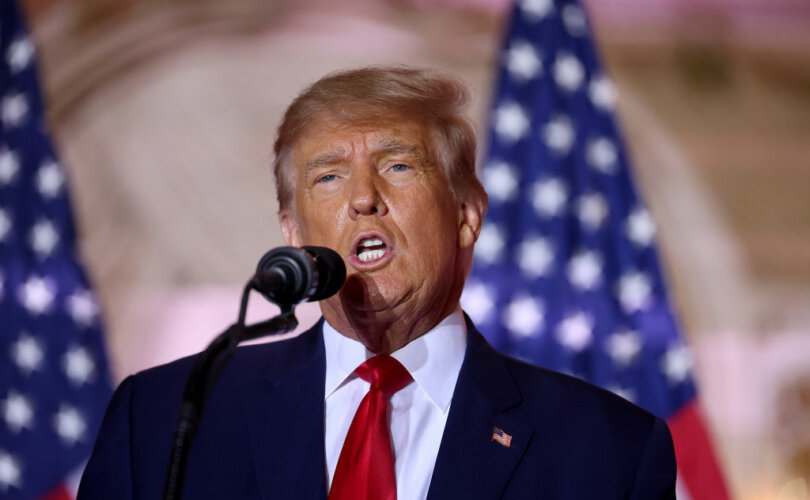 Former U.S. President Donald Trump speaks during an event at his Mar-a-Lago home on November 15, 2022, in Palm Beach, FloridaPhoto by Joe Raedle/Getty Images

(LifeSiteNews) — After almost 40 years putting my whole heart and soul into working to end the mass, worldwide slaughter of the innocent through abortion, I was really upset by former President Donald Trump’s statement on Sunday on the issue.

This previously “most pro-life of all recent presidents” wrongly claimed the “abortion issue was poorly handled by many Republicans, especially those that firmly insisted on No Exceptions, even in the case of Rape, Incest, or Life of the Mother, that lost large numbers of Voters.”

It would have been better that he said nothing on that issue. As far as I am concerned, he is dead wrong about his claim, and I use “dead” intentionally. In reality, the opposite to what he claimed in that statement has frequently been the truth. How could he be so very wrong after all that he has learned over the past several years?

Those who constantly, deliberately make or accept those exceptions undermine their credibility and the claims of the entire pro-life movement to be pro-life. They claim that every human life is sacred and worthy of protection and then, for political pragmatism purposes, say that some categories of humans can be murdered because of the circumstances in which they were conceived.

It does not compute. Many see the obvious inconsistency.

It is one thing to have candidates who personally, such as Trump, insist on those exceptions, usually because of bad advice from non-pro-life political advisers in their camp. It is much worse for Trump to insist that all “pro-life” candidates that he will support must have those exceptions in their abortion stance.

Trump has now shown that he is not sincerely pro-life when he went that far. Any pro-life persons who advocate those exceptions betray a weakness of conviction, a lack of trust in God and the power of His truth, and they lack the ability and understanding to craft a confident no-exceptions position in a way that could be appreciated by much of the public.

Either all human lives are sacred, or they are not. Either every child is a human from conception, regardless of the circumstances under which they were conceived or they are not human. There is no in-between category or argument. Political pragmatism, when it involves life and death, kills.

Many “pro-life” candidates who advocate the usual, unnecessary exceptions have frequently lost crucial votes because of that glaring logical and moral inconsistency. I suggest pro-abortion people especially see the inconsistency and how unprincipled and weak it makes us appear to be. No matter what their personal position on abortion is, most people respect a consistently principled person.

Many voters stay home rather than vote for a weak or false pro-life candidate that they have learned cannot be relied upon. They have bitterly discovered that more betrayal is inevitable from most such candidates who don’t get what being truly pro-life means. Betrayal has been much too common from “pro-life” politicians – even some of the very best.

Many of those who won’t compromise do very well in elections, but only if they are also attractive, articulate, organized, and effective candidates on all issues and are seen to be consistently principled rather than the usual, pragmatic politicos. For over 40 years now, I have seen no-exceptions candidates win and get re-elected year after year.

Those who add the usual rape, incest, and life of the mother death sentence get paid off in some way or other for watering down their consciences and get extra party help. We could say they have made a pact with the devil. We can never trade away the lives of some innocents for any reason.

For those who hold firm to no exceptions and lose, it is rarely their consistently pro-life position that causes the loss. They are almost always just generally weak, poorly organized or funded candidates, or they don’t know how to speak on this issue in a convincing, confident, and least alienating manner.

On the other hand, some lose because people in the political establishments consider that such candidates’ moral consistency indicates they can’t be controlled and therefore must be eliminated – by people in their own party – even if it means the party losing a seat until the next election.

They are tolerated only if they indicate they can be controlled. The exceptions policy sends that signal. We have lost Trump. He has also become too easy to be controlled now by certain party insiders who are not pro-life but usually claim to be. Such advisers who insist that their pro-life candidate will lose if he or she does not include the abortion exceptions are frauds. Why do pro-life candidates constantly hire such people?

Trump has also killed a lot of his support with his hosting of that massive Log Cabin Republicans event at Mar-a-Lago and his and Melania’s and Kari Lake’s enthusiastic partying with them. In doing so, they gave massive, likely naïve support to the ongoing LGBT agenda to take over all the parties in order to get the payback of legislation and policies to protect and promote their immoral, anti-life, anti-natural-family lifestyle, and to punish all who even think or speak anything critical of what they do.

I have seen this disturbing outcome frequently happen over the years because of naïve “conservative” candidates and leaders heavily relying on the campaign and other organizational skills of gay activists who have all the time in the world to do that work compared to the rest of us with families, church, and faith responsibilities, etc.

Then there have been Trump’s astonishingly bad, false statements on his Operation Warp Speed, deadly COVID jabs allegedly having saved millions of lives. The exact opposite has now been proven to be the truth about those bioweapons, developed and produced with heavy DARPA involvement, for a globalist slavery, de-population agenda, and generating immoral, record billions of dollars of profit for Nazi-level, criminal Big Pharma companies.

Those evil multi-national corporations have lied nonstop about everything related to the jabs. The sudden deaths and cancers, infertility, and many other short- and long-term serious injuries from them continue to increase and even many children, who could not possibly have benefited in any way from the jabs, are now dying from them. This horror story is expanding every day and affecting the entire world – thanks to U.S. government and health agency policies that the rest of the world has relied upon for their own COVID policies.

Trump should apologize that he listened to all the wrong people and should call for an immediate, worldwide halt on the COVID jabbing and demand criminal investigations of all those who wrongly advocated lockdowns, masking, and all the other deadly, unnecessary COVID mandates and policies that have devasted many nations, individuals, families, and businesses. Trump was lied to incessantly by those around him and he should admit that.

I admit that Trump has done many incredibly good things, and we have been thrilled to publish numerous articles about them. I have written many of those articles on LifeSiteNews.

Since he was removed from the presidency, however, he has not been the same person. Many of us feel betrayed by him.

He still has many good policies and will certainly be better than anyone the Democrats will put forward. Currently, even though he is much lower than Trump in the polls, it seems Ron DeSantis will likely be a better option. I was hoping that Trump would wake up to the above issues and repent and change, but that has sadly not happened.

We are in a historic nightmare situation right now in many respects. Whether we will ever have a fair election again is in serious doubt.

We must continue to do the best that we humanly can and leave the rest up to God, but compromising our fundamental principles in any way cannot earn us any graces from God who ultimately is the only One who matters.

We are well beyond compromising political pragmatism being able to save us now. We must change to a policy of being wise as serpents but also fully placing all our trust in God who is the only One who can save us at this time. If we continue to compromise on His principles, He will not save us.