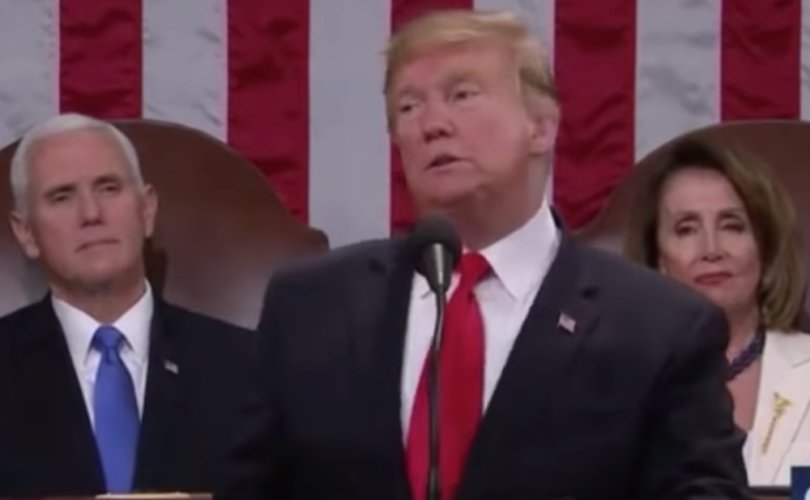 February 6, 2019 (LifeSiteNews) – You could sum up in one word why many evangelicals voted for Donald Trump: abortion. It is therefore highly significant that it was Trump who made what might well be the strongest pro-life statement ever in a State of the Union address.

In 2003, President George W. Bush spoke out against partial-birth abortion, saying, “By caring for children who need mentors, and for addicted men and women who need treatment, we are building a more welcoming society – a culture that values every life. And in this work we must not overlook the weakest among us. I ask you to protect infants at the very hour of their birth and end the practice of partial-birth abortion.”

But Trump took things to another level by rebuking the celebration of New York’s new abortion law and Virginia Gov. Ralph Northam’s infanticide comments. The President minced no words.

He said, “There could be no greater contrast to the beautiful image of a mother holding her infant child than the chilling displays our Nation saw in recent days. Lawmakers in New York cheered with delight upon the passage of legislation that would allow a baby to be ripped from the mother's womb moments before birth. These are living, feeling, beautiful babies who will never get the chance to share their love and dreams with the world. And then, we had the case of the Governor of Virginia where he basically stated he would execute a baby after birth.”

So, he first appealed to a mother’s instincts, then contrasted that with the heartlessness of lawmakers cheering a brutal abortion law, then described Gov. Northam’s position for exactly what it was: giving parents the right to “execute a baby after birth.”

This was a significant moment in the history of the pro-life movement.

He continued, “To defend the dignity of every person, I am asking the Congress to pass legislation to prohibit the late-term abortion of children who can feel pain in the mother’s womb. Let us work together to build a culture that cherishes innocent life. And let us reaffirm a fundamental truth:  all children – born and unborn – are made in the holy image of God.”

To repeat: This was a historic moment.

Was Trump simply playing to his base? Was he trying to rally the troops for 2020? We he sounding religious when he is no such thing?

But even if that was the case, it would be still highly significant, given the power of the President’s bully pulpit.

But the truth is that Trump has backed his words with actions.

He has appointed pro-life justices to the courts.

He has signed pro-life bills.

And he has been consistent in his stance throughout his presidency.

In that respect, whether he really means what he says and does is secondary. What matters is that he is both saying it and doing it.

Not surprisingly, there was immediate liberal pushback against comments, with Lydia O’Connor at the Huffington Post proclaiming, “Trump Turns To Absurd Abortion Imagery In State Of The Union Speech.”

“The president claimed that a new New York law would ‘allow a baby to be ripped from the mother’s womb moments before birth.’”

O’Connor dismisses Trump’s claims, writing, “what the bill does is expand access to abortion after 24 weeks of pregnancy to women carrying a fetus that cannot live outside the womb. Previously, the procedure was available only to women at that stage of pregnancy if their health was threatened.”

In support of this, she links to another article which notes that, “Under the new law . . . women can also get an abortion after 24 weeks if their health is threatened or the fetus isn’t viable.”

So, the very link provided by O’Connor contradicts her argument and vindicates Trump’s imagery: Right up to the moment of the birth, if an abortion was deemed necessary for the mother’s “health,” it could be performed.

Why not own up to it?

Why not celebrate it, as the New York lawmakers did?

And, in the spirit of “women’s rights,” why does it matter if the baby is aborted at eight weeks or at 30 weeks? What is wrong with Trump’s imagery if the baby is still in the womb?

Right now, with the increasing militancy of the pro-abortionists, the pro-life movement is freshly mobilized.

And the roles of President Trump and Vice President Pence have been highly significant as well, with Pence addressing last month’s pro-life rally in person and Trump doing so remotely.

Pence also wrote a stinging response to Gov. Northam’s remarks, which he characterized as “morally reprehensible and evil.”

Against this backdrop, the importance of Trump’s State of the Union comments can hardly be exaggerated, underscoring why many evangelicals voted for him.

How different things would look today had Hillary Clinton been president.