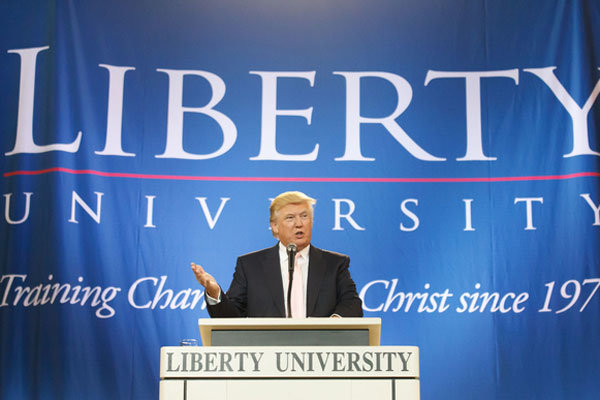 To many, this will not be news. Many Christian leaders came to this conclusion when Bill Clinton left office with sky-high approval ratings, in spite of his affair with a White House intern, which he later lied about. The Starr Report had laid out in excruciating detail the president’s philandering predilections, and no one had cared.

One of my writer friends has often commented to me that he stopped taking American evangelicals seriously when Newt Gingrich, who cheated on his cancer-stricken wife before John Edwards made it a thing, swept the South Carolina Republican Primary in 2012. But at least Newt Gingrich has attempted to re-establish himself as someone with values. Trump barely makes any such pretences.

Evangelicals are now overwhelmingly supporting Donald Trump: 34% of them turned out for him in South Carolina, in contrast to 21% for Marco Rubio and 26% for Ted Cruz. Both of these men have publicly declared their faith, both have denounced abortion and promised to oppose Planned Parenthood, and both have committed to defending religious liberty. Both were rejected by the majority of evangelicals in South Carolina. FiveThirtyEight ironically noted that “Trump’s South Carolina Win Shows Evangelicals Aren’t Necessarily Voting On Their Faith.” Indeed.

It gets worse. The son of the Moral Majority’s founder, Jerry Falwell Jr., has actually endorsed Trump. The head of a university that makes all students agree to live a Christian lifestyle has just backed a man who is the antithesis of all that Liberty University teaches.

Donald Trump has bragged about his promiscuity, even telling radio host Howard Stern that he feels “lucky” not to have contracted an STD while engaging in sexual escapades.

Donald Trump has bragged about sleeping with the wives of other men, writing in The Art of the Deal that, “If I told the real stories of my experiences with women, often seemingly very happily married and important women, this book would be a guaranteed best-seller.”

Trump casinos were some of the first casinos in Atlantic City to come featuring strip clubs.

In Donald Trump’s version of Christianity, he doesn’t have to ask God for forgiveness.

Donald Trump has consistently supported abortion, throughout all nine months, until very recently. His “pro-life conversion” story is very dubious.

Donald Trump still supports Planned Parenthood, in spite of a year of horrifying revelations about the organization. One long-time pro-life veteran told me he remembers protesting a Planned Parenthood fundraiser at the Trump Building in New York.

In the face of such evidence, I’m forced to conclude that so-called Christian support for Donald Trump says nothing about Donald Trump and everything about modern Christianity. After all, 44% of mainline Protestants and 50% of Catholics voted for Barack Obama in 2012, too.

Christians are no longer voting based on their values. They are voting based on celebrity, and hype, and emotion, and who knows what else. I went to a Donald Trump rally in Charleston over the weekend, and the religious fervor of the thousands of attendees was unsettling to say the least. It seemed like part rock concert, part worship service, and the music sounded like a heavy-metal altar call at a mega-church. People were screaming, and straining to touch him when he walked by.

Those of us who work within the pro-life and pro-family movement are going to have to recognize that a large part of Christians has been seduced by the glitz and glamor of modern celebrity, and that boring issues like abortion, the sanctity of marriage, and the protection of the family don’t rank very high on their list of priorities. At least, not if you consider the way they’re voting.