Trump is in the White House, and the Republican party will never be the same

The 2016 election showed the new 'sweet spot' for winning elections has changed.

August 15, 2017 (LifeSiteNews) – A scholar at the Scalia Law School at George Mason University has concluded that “for Presidential elections ... the Republican Worker Party will be the future of American politics.”

Writing in the the pages of The Wall Street Journal, F.H. Buckley cites research that reveals that Republican adherence to a one-dimensional economic policy focused on free markets lost to candidate Donald Trump’s message that veered from strict libertarian economic values.

Instead, Trump tapped into the vast swath of voters who are conservative when it comes to social issues but far more moderate on economic ones.

Washington D.C.’s Libertarian think tanks quickly seized upon the grassroots Tea Party movement at its inception, molding it and giving it shape and definition.

With the help of FreedomWorks, the Tea Party movement that burst on the scene in the spring of 2009 quickly came to be defined by three simple principles: fiscal responsibility, constitutionally limited government and free markets. The fact that the movement stayed away from social issues was the source of its rapid expansion and power. Defining the movement by three such limiting terms was a stroke of genius, and the shepherding of the movement was brilliantly executed. So much so that just a few months later, on September 11, 2009, more than a million people would make their way to Washington, D.C., for a massive Tea Party rally at the U.S. Capitol.

Absent social issues such as abortion, gay marriage, legalization of marijuana, immigration, global warming, the deployment of our military abroad, gun control, and so on, libertarians and conservatives found wholehearted agreement and formed a powerful, winning coalition.

The results were astounding. By any measure, November 2010 was an historic election for the GOP as Republicans regained the U.S. House of Representatives and added more than 720 state legislative seats in their column.

Pundits called the election a hurricane, a tsunami, a seismic shift in power. Although Republicans failed to win the White House in 2012, they made further gains across the country and won the U.S. Senate.

Despite the wins, America’s heartland did not experience the same Wall Street-generated economic gains that coastal Americans did. While the nation’s elites of all political stripes thrived, the folks soon to be dubbed “Deplorables” by Candidate Hillary Clinton continued to watch many of their communities deteriorate, their families disintegrate, and beloved church and faith-related organizations crumble.

The heartland came to realize that the nation didn’t face an exclusively fiscal problem:  At its core, the national problem is the erosion of faith and morals. A laser-like focus on fiscal “freedom” and smaller government failed to address those.

Besmirched, tainted, rapists, sycophants, cowards and scarlet letter-wearing prostitutes. Those were a few of the choice words the nation’s conservative intelligentsia used to describe those who supported Donald Trump.

The NeverTrump Republican set stood in judgment of Trump supporters, making their opinion every bit as clear as Hillary Clinton’s “Deplorable” comment did.

During the 2016 presidential campaign, one prominent conservative issued a not-so-veiled threat, saying “... it will be important whether Trump wins or loses for there to be spokesmen and leaders of social conservative causes who will not have been besmirched and tainted by their association with Trump.”

Translation: “If you publicly support Donald Trump, social conservatives (and the large, powerful, network of well-endowed organizations they currently control) will forever marginalize you.”

The Wall Street Journal’s Bret Stephens asserted that those who disagree with him deserve to be taught a lesson: “It’s important that Donald Trump and what he represents — this kind of ethnic quote, ‘conservatism,’ or populism be so decisively rebuked that the Republican Party, the Republican voters will forever learn their lesson that they cannot nominate a man so manifestly unqualified to be president in any way, shape or form.” It should be noted that since the election, Stephens now writes for The New York Times.

Another asserted, “Trumpism represents an angry outburst ... we should be able to sympathize with [their] bitterness while holding Trump’s supporters at arm’s length.”

The NeverTrumpers claimed they occupied moral high ground, justifying themselves at the expense of those they thought would follow them. As it turned out, almost nobody was listening to them.

In November 2016, “heartland voters” broke free from the sway of conservative elites, and established a different platform for the GOP, recalibrating the political and social trajectory for the party and the nation.

Lee Drutman at the Voter’s Study Group mapped the importance of both social and economic issues for 2016 Republican and Democrat voters. He noted, “In both parties, the donor class is both more conservative on economic issues and more liberal on social issues, as compared to the rest of the party 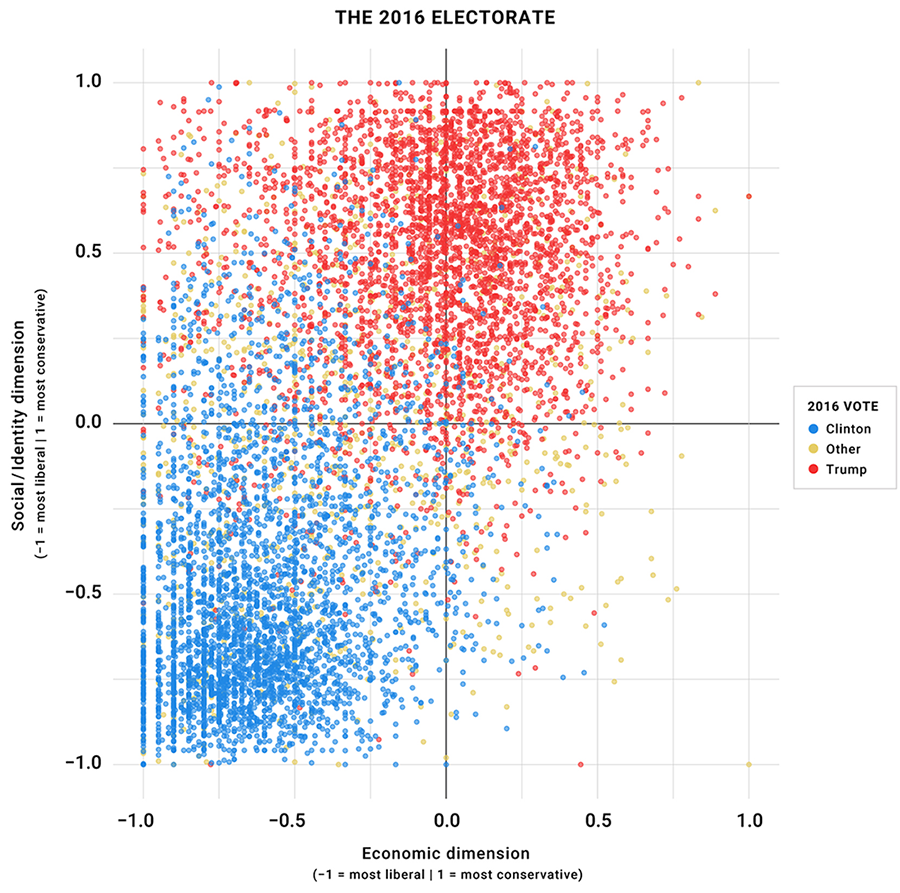 “After the election, the so-called NeverTrumpers claimed that each of their favored candidates would also have beaten Mrs. Clinton. Mr. Drutman’s figures show what a pipe dream that is,” notes F.H Buckley in the WSJ. “A presidential candidate like Ted Cruz, who defines himself primarily through right-wing economic policies, begins with nearly three-quarters of the electorate in the other camp. Such a candidate isn’t likely to go very far.”

More significantly, Buckley says, “The crucial differences between the two parties came down to social concerns, including pride in America, immigration, and especially moral issues such as abortion and gay marriage. The social conservative awakening that helped elect Mr. Trump came when voters recognized that the liberal agenda amounted to something more than a shield to protect sexual minorities. It was also a sword to be used against social conservatives.”

The new “sweet spot” in American politics is now the intersection of economic liberals and social conservatives.

According to Buckley, the “sweet spot” is “the place where presidential elections are won, and the winner is usually going to be the candidate who won’t touch Social Security and promises to nominate judges in the mold of Antonin Scalia.”