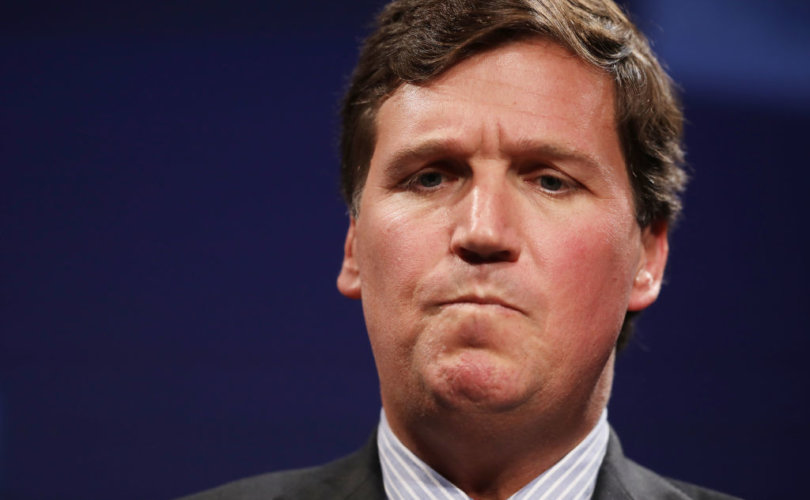 July 15, 2019 (LifeSiteNews) – The first thing to note about Tucker Carlson is that when he’s on stage and riffing on his irritations, he is hilarious. He began his keynote speech at the National Conservatism conference in Washington, D.C. on Monday by rejecting Rusty Reno’s laudatory introduction of him and noting that as someone—he couldn’t remember who—once said, “in the end, all graves go unvisited.” He then cleared his throat and announced that he’d just come back from Maine, where he’d decided to go off nicotine for the first time in 36 years (his consumption of nicotine gum is legendary) and thus had probably forgotten most of his speech, which was advertised in the program as a lecture titled “Big Business Hates Your Family.”

The second thing is that his speeches are a stream-of-consciousness collection of observations that kept those in the press gallery frantically typing to keep track of his train of thought, wondering if perhaps the manic media commentator has ADHD. When Carlson isn’t in front of a camera, his speaking style is relentlessly self-deprecatory, frequently disorganized, and interrupted by explosions of laughter followed by a question posed with a knowing grin: “Know what I mean?” Usually, the audience knew precisely what he meant. He began by noting that he could see quite a few people in the audience—presumably members of the conservative establishment—who didn’t like him, and welcoming them to heckle whenever they saw fit.

Tucker Carlson started his speech by stating something he says frequently: That he is not an intellectual, but merely an observer of what is happening in America of late (he makes this quite clear in his 2018 book Ship of Fools: How a Selfish Ruling Class Is Bringing America to the Brink of Revolution.) Carlson had three key observations to present to the audience, all three of them rather unpopular in conservative circles. Over the past couple of years, Tucker has used his FOX News show to attack both the Left and the Right, and admitted to the crowd that he no longer had a defined ideology and could not identify with any label—rather than politics, he said, he now simply has “reactions” to things.

His first observation was perhaps his most contentious: The main threat to people living their lives the way they see fit is no longer the federal government, but the private sector. “I can’t believe I’m saying that,” he added.

But to Carlson, this now seems obvious. Even cookie companies like Oreo, he noted, are now pushing advertising that asks kids to “name their pronoun”—aiming transgender propaganda at children. This is a corporation, pushing the idea that biology is obsolete and that the gender binary is no longer operative. The libertarian response to this—and the speakers at this conference are constantly taking aim at libertarianism as a bankrupt ideology utterly unsuited to the challenges of today—would be “Start your own Oreo company!” Everyone laughed.

The libertarians are not popular at the National Conservatism conference, in stark contrast to other right-wing gatherings like CPAC (when I went last — years ago — Ron Paul was thronged like a rock star.)

Right now, Carlson pointed out, Google controls virtually all human information, forming a chokepoint that nobody but them can control. This constitutes the largest amount of power concentrated in the smallest group of people in all of American history.

This, Carlson noted, should terrify us.

Google could make “whole ideas disappear, and there’s some evidence that they’re planning to do this.” And of course, there is no pushback from our elected officials “because they’re corrupt.” The anti-trust think tank in DC, Carlson noted to laughter, “literally takes money from Google.”

This doesn’t bother the Left because it essentially means that people who primarily hold their politics own the digital public square.

The Right, said Carlson, is utterly unequipped and unwilling to deal with this situation because they have chained themselves to an antiquated way of viewing the free market and the public square that does not possess the tools to respond to a new era in which old assumptions no longer make sense. Conservatives cannot make their own Google and compete, and that means that they run the risk of seeing their ideas censored or eventually banned by powerful corporatists who can potentially change the course of history.

There are many downsides to Trump, Carlson noted, but the upside is that his election was so shocking that we should all sit back and ask ourselves what else could happen. If the Loch Ness monster is real, he said to roars of laughter, what about the Yeti? When Donald J. Trump became president of the United States, Carlson says, he forced himself to cut through the lies and the propaganda and simply observe what is happening around him. One of the things he discovered constitutes his second key observation: That much of progressivism is “a Freudian projection. Whatever they say you’re doing, they’re doing.” One key example? Antifa: “Guys in black masks with steel bars calling others fascists.” This isn’t Orwellian, Carlson insisted, this is a Freudian transfer.

That led to Carlson’s third observation: The progressive Left is not interested in peaceful co-existence. Carlson’s example again triggered gales of laughter (I even saw journalists who intensely dislike him doubled over): If you went to Alabama and asked someone what they thought of the sexual practices of people in Brooklyn, Carlson noted, they’d look at you as if you were insane. The reality is that they don’t think about it. If you asked them if they’d support banning such practices, they’d laugh in your face. But if you told an elitist in Brooklyn that a huge percentage of people in Alabama opposed gay “marriage,” you’d get an enraged outburst in response. The Brooklyn elitists would say of the Alabamians: “I was just thinking about that this morning! We should kill them!”

Progressives, Carlson noted, lay awake seething that “someone, somewhere, is not on board with the program.” Even if someone simply disagrees in their heart of hearts, they must be confronted and they must be re-educated. That is because progressivism is an evangelical faith—because although you can remove religion, you cannot remove the religious impulse.

“If you think the Resurrection is implausible, just wait ‘til you hear about woke politics,” he joked.

Carlson concluded by again confessing that he had many observations, but no immediately obvious solutions: I sure hope this conference explains what it means to be nationalist and conservative, because I’m not even sure anymore.

In closing, Carlson took a few questions. In response to a question asking what he thought the most important thought that we haven’t yet given ourselves permission to think or say out loud, Carlson articulated what many of us have been thinking: The natural state of man is not progress. There’s no reason to believe that our society is impervious to collapse, and our leaders are “bovine stupid” not to lie awake at night struggling to come up with ways to hold America together, to find something we have in common to rally the citizenry around. He mocked the idea that “diversity is our strength.” Is that true in your marriage? Carlson asked. If I married someone who couldn’t speak English and hated all my views, how would that work out?

Finally, Carlson warned, we should realize that victory is not assured. We do not know if we can prevail in the progressive war against America. In fact, he noted, we could lose—and “that literally gets me up in the morning.” Much has been destroyed over the past several decades, not the least of which is the American family, that ultimate canary in the coalmine for national health. On this, the audience was in full agreement with him, and it is precisely to chart a new response to these problems that so many scholars, writers, and ordinary men and women have gathered in America’s capital this week. Together, they seek to discover what might be done.

Jonathon’s new podcast, The Van Maren Show, is dedicated to telling the stories of the pro-life and pro-family movement. In his latest episode, he interviews Dr. Daniel K. Williams, author of two books published by the Oxford University Press. The first, “God’s Own Party: The Making of the Christian Right” and also, “Defenders of the Unborn: The Pro-Life Movement Before Roe v. Wade.” You can subscribe here and listen to the episode below: