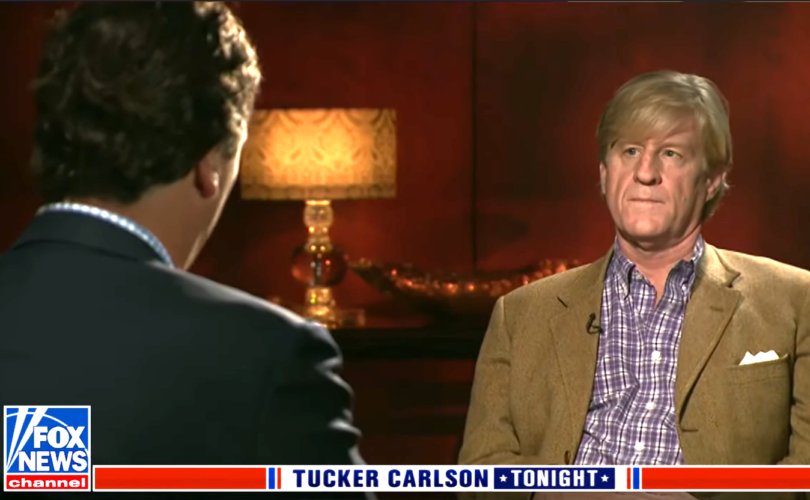 (LifeSiteNews) — On Monday evening during the Tucker Carlson Tonight show, the Fox News host  aired part of an interview with Jack Maxey that was conducted in April in Switzerland and honored Maxey for his persistent work on the Hunter Biden laptop.

Maxey is a former co-host of Steve Bannon’s War Room Pandemic and now a member of LifeSite’s Faith & Reason show. He is a graduate from Yale University (class of 1988), a former member of the U.S. Navy, and a political analyst and historian. He received a copy of Biden’s laptop while working for Bannon in October 2020 and has been working on its contents ever since, distributing copies of the laptop to major outlets such as the Daily Mail and The Washington Post, and sending copies also to the Senate’s Judiciary Committee.

Carlson conveyed on his July 11 show how much President Joe Biden has been involved in his son Hunter’s business deals – against his own public protestations that he had not been involved – and especially in dealing with China. Carlson directed at Biden, the former vice president, the accusation that he has been selling out American interests to Communist China. Evidence from Hunter Biden’s laptop shows that he clearly himself profited from some of the deals with China.

“Biden, Inc.” is one of the subtitles of Carlson’s show, thereby strongly calling out the Biden family – especially President Biden – for profiting for personal gains while in public office.

The Bidens, Carlson explained, “were getting rich from a foreign power that means us harm. And it is not Russia – which is globally almost irrelevant – it is China, which is now pre-eminent.” Carlson showed in detail how the Bidens received millions of U.S. dollars from Chinese companies controlled by the Communist Party. As an example, he quoted emails that revealed that President Xi had promised Hunter Biden $10 million a year for “introductions alone,” which means, in Carlson’s words, “leveraging his father’s position in government to get rich,” which is illegal.

“This is one corrupt system the Bidens sit atop of,” Carlson concluded.

Carlson’s complaint is that all major newspapers are ignoring the facts, as are federal law enforcement agencies.

“Because no news organization would take this up and because no law enforcement agencies seem to be completely disinterested – the FBI has had a copy of this laptop for years now and has done nothing with it – it is fallen to people like Jack Maxey to find out what this about,” Carlson said.

The reason for Carlson bringing up Maxey’s name now and airing parts of the interview with him is the fact that Vincent Kaufman, Maxey’s former programmer who worked with him on the laptop in March and April in Switzerland, has now started to release some of the content of the laptop, which includes the backups of Hunter Biden’s phone. Carlson mentioned this fact on his show.

Maxey also made a statement on social media platform Gettr, in which he gave an explanation for his former colleague’s actions.

However, the images and messages that Kaufman posted on 4chan, a website publishing anonymous leaks and has a controversial reputation, have lewd content. Both Maxey and Mary Grace, an internet host who interviewed Maxey yesterday on the new developments, warn people not to open up such photos and content that might be potentially linked with crimes.

“Do not open it, do not download it, do not keep it on your computer, it is illegal to possess it” or to share it with others, Mary Grace stated. Maxey added that the 4chan website “is controlled by CIA and NSA” as a way of finding these anonymous hackers.

Maxey, speaking yesterday with Grace right after the Tucker Carlson show aired, insisted that he had nothing to do with Kaufman’s decision to leak content of the laptop. On the contrary, he insisted that he himself always abided by the law and told Kaufman, when working with him, how important this principle is. Kaufman, according to Maxey, is a “very good guy” and has a “good heart,” but is “immature,” naive and lacks a sense of reality, having spent most of his life at the computer.

Kaufman was very troubled by “what we found” on the computer, as Maxey recounted. And since nothing happened after they handed over the new material to several media outlets, it seems that Kaufman felt the need to act and to release some of the new content.

Maxey said that he contacted Kaufman over the weekend when he heard of the new leaks and learned that Kaufman was behind the leaks. Since then, he has “stopped communications” with Kaufman, because “under no circumstances can I commit a crime; I will not do it,” the political analyst insisted. He went on to say that he never would, and never did, “post pictures of children or anything like that.” “Remember the victims,” he exclaimed. We are dealing here with real people whose reputation “could be damaged,” entailing real suffering. Maxey said he would never publish any of such content. “From day one, I wanted the Constitution to function, I want the courts to function, I want justice to function,” he said. He was told by one friend that “you are a dead man” if he posted these pictures.

Maxey, who had originally planned to publish the laptop while in Switzerland and after having catalogued and organized its content, refrained from doing so after receiving legal advice that European laws – which are stricter in this regard than U.S. laws – would not allow him to do so and could put him in prison. Maxey was told, if he were to follow up on his plan, he “would be in real trouble here in the EU, and in Switzerland in particular” as he told Mary Grace.

However, while Maxey did not achieve his main goal – the publication of the laptop – he did find, with the help of Kaufman, 450 gigabites of deleted material that they were able to recover, including 80,000 photos. This revelation brought the laptop back into the international news, together with the fact that Maxey had put both The New York Times and The Washington Post under pressure by telling them of his travel and work plans. Therefore, only days after his departure to Switzerland, the two major national newspapers came out confirming, for the first time, the authenticity of the laptop.

Maxey, in speaking with Mary Grace Media, explained that he did not do the work for financial reimbursement but exclusively “for the love of my country,” and he is encouraging people to take courage. One of the requests he made on air was that he still needs to find one courageous sheriff in the U.S. who would be willing to help him get Hunter Biden to trial and justice for the crimes he has committed according to the findings on his laptop.