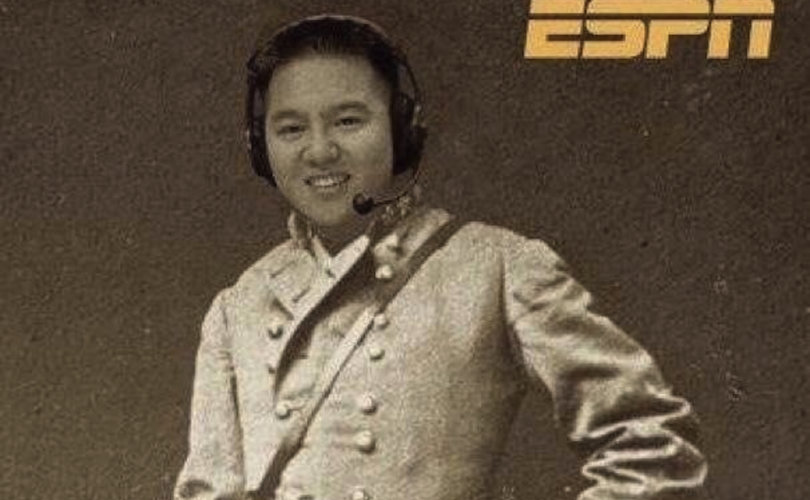 August 25, 2017 (LifeSiteNews) – In view of recent events in Charlottesville, ESPN announced it has pulled one of its play-by-play commentators from the upcoming broadcast of the University of Virginia’s season-opening football game on Sept. 2 against William & Mary College, also in Virginia.

The sports announcer’s name is similar to Confederate General Robert E. Lee whose statue stood at the center of last weekend’s statue-based controversy. ESPN feared a backlash if it brought broadcaster Robert Lee to Charlottesville, home of the University of Virginia, to cover the game.

The only thing is, Robert Lee is an Asian American, with no evident ties to the Old Dominion State’s famous family.

As news of the programming change broke, social media lit up with statements poking fun at the sports media giant for its PC-motivated decision. The Facebook and Twitter postings speak for themselves:

If this isn't the same Lee that led the Confederate Army, ESPN needs to reverse this idiocy https://t.co/Cv2gdKQZLs

From 1862 until his surrender in 1865, ESPN college football announcer Robert Lee commanded the Confederate Army of Northern Virginia. pic.twitter.com/eQKXyXRNgl

My Dearest Annabelle, I am beset by perplexities and distresses, I fear the war is lost
<mournful fiddle dirge> pic.twitter.com/TEaFIIeBmh

My Most Darling Annabelle,
The dawn brings vexations anew. Our valiant line has collapsed and the Memes have captured Bristol. Pray for me pic.twitter.com/tnTAxwiqzB

Wow ESPN really??? Up next Sara Lee cakes will be removed…Bruce Lee movies forever banned !! How stupid can you possibly be??? https://t.co/yPGDdr5cbv

And perhaps best of all:

“We collectively made the decision with Robert to switch games as the tragic events in Charlottesville were unfolding, simply because of the coincidence of his name,” the company said in a statement. “In that moment it felt right to all parties. It’s a shame that this is even a topic of conversation and we regret that who calls play-by-play for a football game has become an issue.”

Still, ESPN’s statement did nothing to stem the tide of self-inflicted mockery.

And just when you thought the ridicule couldn’t get worse, there’s this:

Somebody should erect a statue in his honor