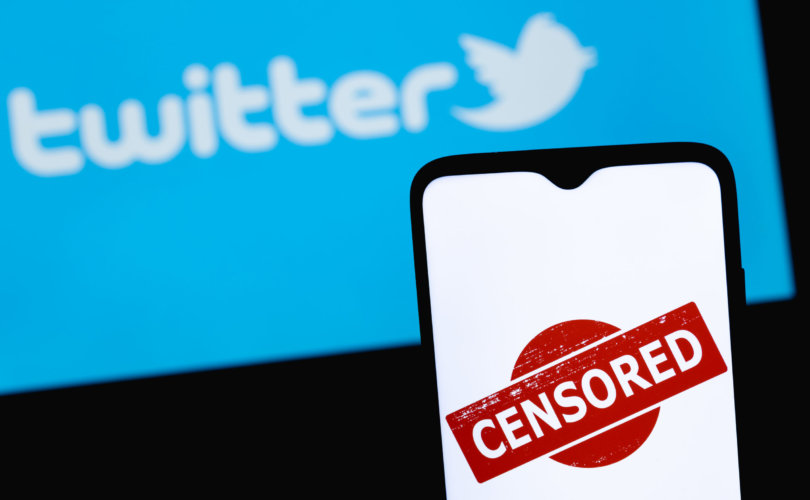 (LifeSiteNews) — For twenty-five years, LifeSiteNews has stood for life, faith, family, and freedom. With the rise of Big Tech, especially Twitter, we at LifeSiteNews were quick to utilize this new technology for your pro-life and pro-family goals, and to build a culture of life for your children and grandchildren.

Sold to us under the false pretense as a mere vehicle for speech, we all signed on to Twitter, and began taking advantage of its extensive reach.

But Twitter became power-hungry. It began censoring us. Ultimately, Twitter banned us for telling the truth about transgenderism and the dangers of the COVID-19 so-called vaccines.

For nearly two years, LifeSiteNews was suspended from sharing any of our reporting on our LifeSite and LifeSite Catholic accounts because of these two posts. LifeSiteNews remained banned from using our own Twitter accounts, engaging with our own followers, and bringing you the truth about the most important topics for one simple reason: Twitter doesn’t care about you.

Twitter only cares about its globalist agenda. The fewer voices with which the New World Order must contend, the deeper and more efficiently this “Great Reset” can infiltrate our communities and homes. And so, for nearly two years, we remained completely suspended as this diabolical agenda spread into every facet of life.

But we could not allow you to lose the pro-family and pro-life culture that together we have all worked tirelessly to build. It was time to act against Twitter’s censorship and regain our ability to engage our social media following on this particular platform.

It was time that LifeSiteNews threw off the shackles that bound us in “Twitter jail.”

But why now? Doesn’t it seem that LifeSiteNews is bowing to Big Tech by playing by their rules, allowing Twitter to censor our posts, just to regain access to our accounts?

Make no mistake, we still hold to our beliefs, and I encourage everyone to read LifeSiteNews’ full stance in our official statement here.

Until Twitter allows for true freedom of speech, we decided we had to move forward reaching our audience in the limited capacity the platform allows — making our unfiltered reporting at LifeSiteNews all the more important.

This desire to begin using Twitter again was entirely inspired because of you. Unlike Twitter, we at LifeSiteNews do care about you.

Just this August, LifeSiteNews celebrated our 25 Year Anniversary Gala where I was honored to meet so many of you, our most loyal supporters. Afterwards, I realized that so many more were unable to attend, so we launched an online celebration called 25 Years: A Legacy of Life. This was our special way to connect with our readers and viewers from across the globe.

However, to engage with you fully, we needed to re-engage our social media accounts. Like it or not (and trust me, we don’t), Twitter has become the public square. Twitter has amassed a powerful reach, but moving forward, we realize it is quite limiting in terms of the truth.

Nevertheless, we will use the platform for what we can, and will continue to bring you the full and uncensored truth on the many, many shows — and countless articles — offered at LifeSiteNews.