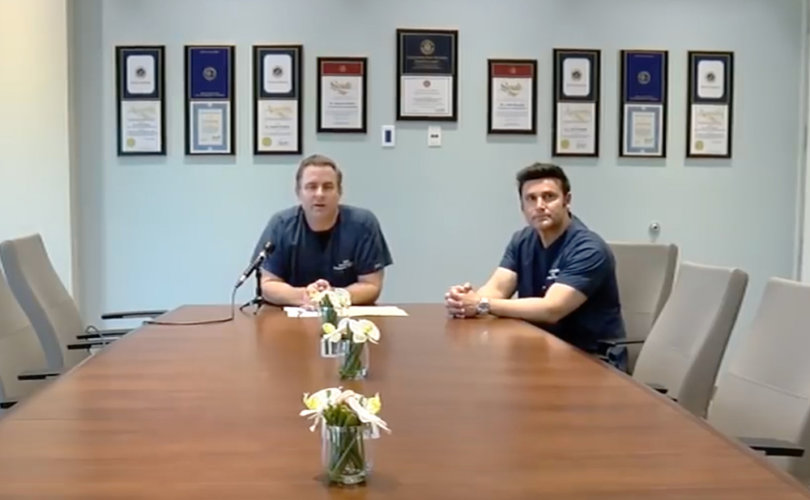 April 24, 2020 (LifeSiteNews) – Two California doctors may have started a revolution against the Wuhan virus extreme mitigation policies with their calm, very sincere, scientific-based and statistics-emphasizing presentation in a press conference two days ago. Dr. Artin Massihi and Dr. Dan Erickson are with Accelerated Urgent Care in Bakersfield California.

The comments from viewers at the bottom of this article were taken from underneath the Facebook page under which their video was posted. They give you an idea about what they revealed and how many are responding to their presentation.

The video has been taken down by YouTube for “violating community standards”, but it can still be viewed (The first video discusses Facebook taking down the original video. Click the middle, right side arrow on that video to load the original press conference. Click again at the end of that video to see their second video) on the website of the television station that recorded the presentation and posted it to Facebook.

I have constantly felt, from the beginning of this pandemic, that there are many things that do not add up about the unprecedented and devastating measures that have been put in place to try to stop this novel virus. They were all based on trying to prevent the high numbers of model-estimated deaths that have clearly all proven to be dramatically wrong.

Because of this I recently wrote the article, “Are globalists using coronavirus crisis as battering ram to destroy, remake world order?” The article has received far more Facebook likes and readership than any article I have written in over 20 years for LifeSite. Many are clearly sensing the same things.

The doctors note that the scientific and statistical evidence does not at all justify the general public becoming as terrified of this virus as they are and as the media continues to make them feel every day.

These two men note, from the evidence they present, that the chance of most of the public dying from the Wujan virus is actually very low and that, overall, it does not seem much worse than the seasonal flu. However, it is definitely now known that for persons with the frequently noted pre-existing health conditions, the virus has been very dangerous and that is where the majority of the greater than normal number of recorded deaths for an annually occurring virus has come from.

One of the crucial things they highlight is that we normally do not isolate healthy people during a disease outbreak. During this pandemic, both the sick and the healthy or otherwise vulnerable are being forced to endure substantial isolation that results in many negative and even life-threatening outcomes, such as increased suicides, child molestations, and dangerous addictions.

They also warn this extended indoors isolation out of the sun and fresh air will weaken the immune systems of healthy people to the point that they will be more susceptible to the Wuhan virus and other communicable diseases after the isolation is ended. This could cause an unexpected flood of otherwise avoidable, seriously ill patients into hospitals when the isolation period is ended.

More people are asking “why are we doing all of this?,” “What has been the real benefit of it, if any,” and “can we keep going on like this for much longer without causing massive social, economic, and even health damage that could take years to recover from?”

These two doctors have taken a heroic risk in being publicly honest about what they have been seeing, experiencing, and asking themselves, as they have seen too many people with serious health issues dangerously avoiding hospitals because of unwarranted fear of infection, while far fewer people are dying from the virus than they realize.

Read the comments below that were posted under the first of the two videos. The Part 2 Video is much shorter than Part 1.  And then watch both parts. (See note above indicating the videos have been removed by Facebook but can be viewed on the television statin website)

There is a new, May 1st video of the two doctors clarifying their original remarks and adding new information. Like the original two videos, this one has also gone viral on the Internet.

Viewer comments posted under the video

CNN’s Lemon slams pastor killed by coronavirus: ‘Let that be a lesson’ to faithful