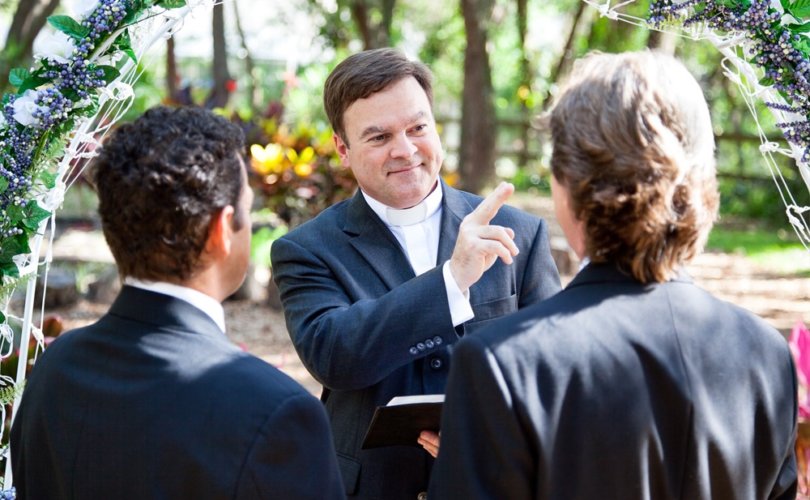 August 26, 2019 (LifeSiteNews) – Sources in Germany have alerted LifeSiteNews that two German bishops – the Vice-President of the German Bishops’ Conference, Bishop Franz-Josef Bode (Osnabrück), and Hamburg’s Archbishop Stefan Hesse – have written a preface for the book With the Blessing of the Church? Same-Sex Partnership in the Focus of Pastoral Care (Mit dem Segen der Kirche? Gleichgeschlechtliche Partnerschaft im Fokus der Pastoral).

The book, which has just been published in Germany by the publishing house Herder Verlag, was edited by Dr. Stephan Loos, Dr. Michael Reitemeyer, and Georg Trettin. Trettin is a theologian who lives in a “marriage” with another man in Frankfurt on the Main and who is an organizer of “Queer Church Services” in Germany. Loos and Reitemeyer are each the heads of the educational academies of the Diocese of Osnabrück and the Archdiocese of Hamburg.

As the editors of this new book explain, the book is the result of a privately held conference that was organized in 2018 and took place June 4-5 of that year. Jens Ehebrecht-Zumsande, a current employee of the Archdiocese of Hamburg, is explicitly named as a contributor to this project. He has worked for years for the Archdiocese of Hamburg, and is now responsible for the diocesan pastoral department in a leading position.

As our sources point out, however, Ehebrecht-Zumsande has been engaged in an amorous relationship with another man for more than 10 years (as they state openly on Facebook) and participates in a project in Hamburg called “Pride Salon,” a monthly gathering for people who are attempting to establish a special community so as to discuss matters of the “LSBTIQ+” (which stands for “lesbian, homosexual, bisexual, trans-, inter-, queer people”) movement. Ehebrecht-Zumsande’s partner with whom he lives is Stefan Mielchen, the head of Pride Hamburg, which organizes Hamburg’s Christopher Street Parade.

As one of our sources in Germany comments, “it is to be assumed that Archbishop Stefan Hesse is fully informed about this ‘life reality’ [of Ehebrecht-Zumsande’s life]. It may be doubtful whether or not it is in accordance with the mandate and the moral teaching of the Church that a homo activist has been tasked with leading a commission for a pastoral renewal.”

Additionally, Caritas of the Archdiocese of Hamburg is also running a counseling office for “rainbow families.” Three counselors offer help and special counseling to those “who feel that they belong to the LGBT*I community.” They also host a weekly playdate for toddlers of these families.

With the Blessing of the Church? Same-Sex Partnership in the Focus of Pastoral Care is soon to be presented to the larger public on August 27 in Hamburg, by the diocesan Catholic Academy Hamburg, in cooperation with the Ludwig Windhorst Academy of the Diocese of Osnabrück. One of the speakers will be Professor Thomas Schüller, a theologian and canon law expert from the University of Münster, who contributed an essay to the book. According to the editors of the book, Schüller claims that, while canon law clearly links the Sacrament of Matrimony with procreation, it nevertheless would be “possible” for a diocesan bishop, for the sake of a liturgical blessing for homosexual couples, “to establish norms for the realm of the liturgy for the church that has been entrusted to him.”

One essay in the book is entitled “Two Women on the Way to Marriage.” Its author, Petra Dankova – Advocacy Director of the feminist group Voices of Faith – describes her own personal experience “in and with the Church.”

While several essays deal with “pastoral perspectives,” another set of essays deals specifically with the question of a liturgical blessing for homosexuals. Among the contributors here is Johannes zu Eltz, a priest and Dean of the Catholic Church in Frankfurt on the Main who has worked on a liturgical blessing for homosexual couples for years. He presents in his essay the concrete details of how such a liturgical blessing of homosexual couples could look and how it could be prepared. Zu Eltz explicitly refers to Pope Francis’ post-synodal exhortation Amoris Laetitia, especially his call for “regional solutions,” as well as his “appreciation of the real love in so-called ‘irregular’” situations, in which “growth in love and grace is possible,” in zu Eltz’ words. He refers to Amoris Laetitia 3; 300; 297; 299; 305; and other places.

Yet another essay is written by Professor Stephan Goertz, who is the author of the book Who am I to Judge? Homosexuality and the Catholic Church. During the debates of the 2015 Synod of Bishops on the Family, Goertz argued that homosexuality should no longer be condemned because the times have changed. He even went so far as to propose that homosexual unions could have a sacramental character. “One could ask oneself,” he stated at the time, “whether a loyal homosexual loving relationship – one which understands itself as a partnership within the frame of the belief in the God of Israel and of Jesus – could not even have a sacramental character. Homosexual partnerships could thereby find an ecclesiastical approval.”

The German Bishops’ Conference announced this spring that it will start a “binding synodal path” questioning the Church’s teaching on sexuality. For this matter, they invited another theologian, Professor Eberhard Schockenhoff, who presented arguments for the revision of the Church’s teachings on contraception, cohabitation, homosexuality, and gender theory, among others.

Bishop Bode and Archbishop Hesse, in their own preface for this new book on the blessing of homosexual couples, state that “there are many engaged Catholics, among them not least parents, who wish for a more open way of dealing with homosexuals than what they currently experience in the Church.” Others, they politely add, are opposed to such an approach.

Here, the bishops write that they stand in the “middle of these debates.” Hesse adds, “we as Church can only influence this society with credibility when we deal with the life realities of the people. Of course, to them [the people] belong, in Hamburg, also homosexual men and lesbian women.”

Both bishops propose a way of mutual respect and add that “when homosexual men and lesbian women confess themselves as believing Christians – in spite of the experiences of rejection – and ask for pastoral care on their path of life, then this is very impressive and challenges us to develop together perspectives.” Here, the “wish for a blessing for same-sex partnerships as an expression of a faithful trust that God’s love and fidelity toward us men is being effective in it” is to be mentioned.

After also mentioning the June 4-5, 2018 conference, whose talks are now published in this new book, the two German bishops add that the “aim of the conference was to give scope to the yearning of homosexual couples to receive a Church blessing and to review the current state of the theological research and teaching.”

Finally, Archbishop Hesse and Bishop Bode point out that this conference is only the beginning of a larger debate.

“Part of the synodal path, which the German Bishops’ Conference approved of at its spring assembly in March of 2019, is also a necessary further development of the Catholic sexual morality.” This teaching, they explain, is the “foundation for quite some taboos in the Church, but also the foundation for the clarification of the question about the blessing, not only for homosexual couples.”

The bishops stress that this is a “process” and that it is about “being on the way with the people.”

“We have to start in the community of the Church. The beginning for it has been made.”

Already in January 2018, Bishop Bode proposed that the Church start discussing the blessing of homosexual couples. “We have to reflect upon the question as to how to assess in a differentiated manner a relationship between two homosexual persons,” he said at the time. “Is there not so much positive and good and right, so that we now have to be more just?”

This participation by the two German bishops in the book might indicate that the German Bishops’ Conference is planning to establish such a blessing for homosexual couples.