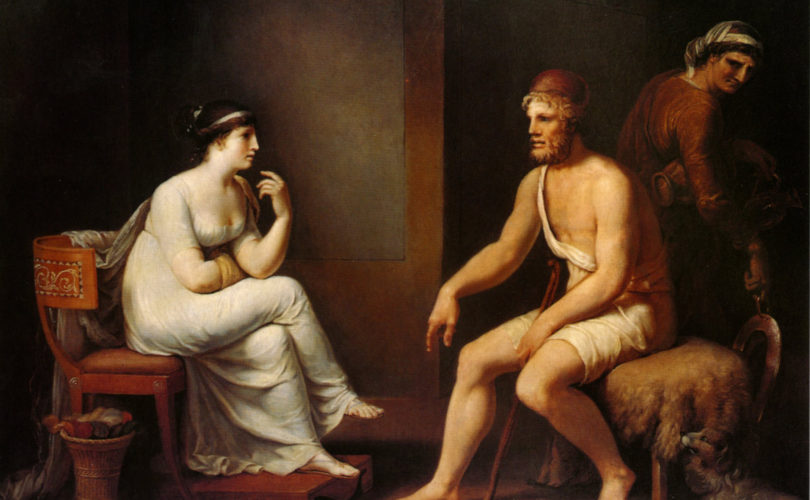 For the Greeks, chaos was the antithesis of cosmos, order: and they had a strong and healthy sense that anything really orderly must be beautiful. (Image: Penelope and Odysseus)

In my last essay I described how the elites of government, business, education, social services, and medicine promote the so-called “transgressive,” the willful breaching of boundaries. I also showed that the Bible describes God's acts of creation as establishing boundaries: “Hitherto shalt thou come, but no further, and here shall thy proud waves be stayed,” says the Lord to the roiling surges of the sea. That means there is something blasphemous about the desire to break natural borders for the sake of breaking them; to invade the warm refuge of the womb to kill; to mutilate the body in dishonor to one's sex; to overrun the ramparts we build up around the innocence of children; to treat constitutional law as if it were putty; to play God.

The result is chaos. I don't mean only a welter of atoms in a void, without form or meaning, or a horde of Huns descending upon a village and putting it to the torch and the sword. I am using the word in its ancient Greek sense.

For the Greeks, chaos was the antithesis of cosmos, order: and they had a strong and healthy sense that anything really orderly must be beautiful. When Odysseus sees the lovely girl Nausicaa, he says, in verse that is courtly and measured, that her comeliness reminds him of a palm tree he saw once, slender and upright, its fronds green and full and perfectly balanced; cosmos. When the young men of Phaeacia dance a masculine dance before him, keeping time, leaping and hurling a ball high and low and back and forth to one another, Odysseus says that they take his breath away; cosmos.

And there is moral beauty as well. Odysseus is sitting in the hovel of his loyal swineherd Eumaeus, back home in Ithaca. He is in disguise as a beggar. His son Telemachus, whom he hasn't seen since he was a baby, enters the hut, after the guard dogs have fawned upon him and wagged their tales – not like the snarling welcome they rightly gave to Odysseus, whom they have never known! Odysseus rises, but the lad says, “No, there's no need, old fellow; Eumaeus can find me a place to sit.” That respect for age and deference to the poor man is exactly right. It is more than politeness. It is an expression of the beauty and order of the boy's soul.

“That's why we have laws,” you may say, “to protect us from such chaos. So what is your worry?” There are two responses to that. The first is that if constitutional laws are set aside or perverted at the whim of politicians, then no law is safe, because you will have slain in the egg the notion of law itself. But the second is that law is a blunt instrument, of limited application. A set of guardrails does not make for safe driving. Compelling children to attend classes in a building for nine months does not ensure that they will learn anything worthwhile there.

Man cannot endure much chaos. Plato noted it long ago; democracy degenerates into the misrule of the passions, and the amnesiac cries of the mob. Then comes the tyrant.

What is the measure of a people's freedom? The ancient pagans and the Christians here spoke in unison: it is the people's moral fiber: the cosmos of the soul. We might put it this way. Liberty is to be measured not by how many matters the people or their representatives legislate about, but by how many matters they do not have to legislate about, because the people keep good order in their souls, their households, their schools, and their villages, and their regions. They do not need the State and its truncheons.

Let me give an example. Several years ago I visited a new college founded by homeschoolers in Virginia, Patrick Henry College. The students are Christian; they attend chapel every morning; they are brighter than their counterparts at Harvard, happier, and far better read. They also do the lion's share of taking care of their spacious campus – they are cooks, janitors, maids, and groundskeepers. They are also security guards. So I began a conversation with one of these undergraduate guards.

“What do you do,” I said, “when some of your fellow students try to bring a keg of beer on campus?”

He glanced at the other students and they all started to laugh. “I don't know,” he said with a shrug. “It's never happened!”

Now turn to the secular university across the city from where I teach. A man and a woman, unmarried, have spent a couple of months fornicating. They cease and desist, though they still call themselves “friends.” One night they are walking back from a party, drunk. He makes advances. From this point their stories diverge, though both agree that they returned to his room, they stripped, and they had sexual intercourse. Two days later she accuses him of rape. He says she initiated the actions. She says she felt pressured to do it. She says he pushed down on her neck – you may fill in the putrid details. His parents come to the rescue, saying that their son is being slandered; they've raised him up to be a good male feminist like his father. He respects women, he does.

Complete chaos. There's not one sane person in this saga of sadness, recklessness, hedonism, and practical atheism. All quite mad; and therefore the same lunatics male and female who bathe in a sewer must “intervene,” with more intrusive, extensive, and insane measures to “protect” jungle women from jungle men. It occurs to no one that decent people do not need such measures, because they have not turned their parks into jungles, their clinics into morgues, and their schools into brothels.

Man cannot endure much chaos. Plato noted it long ago; democracy degenerates into the misrule of the passions, and the amnesiac cries of the mob. Then comes the tyrant, who has been stirring up the disorder behind the scenes, and he says, “Trust in me.” He may let them pursue their stupid pleasures all the more; chaos is his feed.