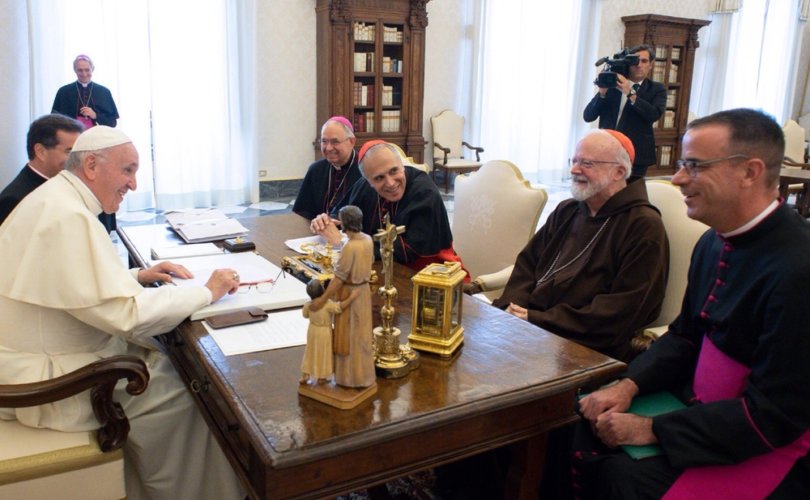 October 8, 2018 (LifeSiteNews) – As Pope Francis and some bishops and priests have told Catholics, clericalism is the root problem of the current sex abuse crisis.

If we are to understand clericalism as the abuse of a hierarchical structure and power in order to keep the laypeople in an inferior position, uninformed and, in abuse cases, even to abuse them sexually, then we should start to address that problem.

A good start would be Cardinal Daniel DiNardo giving U.S. Catholics a full accounting of his audience with the Pope, especially about the Pope's response to DiNardo’s idea of an Apostolic Visitation.

When, in the middle of the McCarrick scandal, Cardinal DiNardo announced that he asked Pope Francis to send an Apostolic Visitation to the U.S. in order to thoroughly investigate all the events surrounding the McCarrick case and Archbishop Carlo Maria Viganò's claims about it, many Catholic faithful took in a breath of fresh hope: such a visitation, with the authority to open secret Church files, could truly bring out the truth about the McCarrick case.

Moreover, such a visitation could help bring out the truth about so many other related shady operations of cover-up and of corruption, for example with regard to Cardinals Donald Wuerl and Kevin Farrell and their possible complicity in McCarrick's evil doings.

When, on September 13, Cardinal DiNardo went to see the Pope and spoke with him for 30 minutes, the only news item we – the much praised and honored “People of God” – received from the Vatican was a picture. The Vatican merely published a photo of that audience, with all participants present, laughing. That photo depicting laughing prelates in the middle of a most serious crisis in the Church was not well-received.

Yet, the Vatican did not deem the simple faithful important enough to inform them about the content of that meeting, its urgency, and any concrete steps that were agreed upon.

As the Catholic Herald's Christopher Altieri describes the situation: “The US bishops have asked Pope Francis to sanction a special investigation into the affair. They announced their intention to seek the measure on August sixteenth, and waited nearly a full month before getting the opportunity to present their request formally. The meeting between the Pope and the leadership of the US Conference of Catholic Bishops on September 13th did not end with an announcement of the authorisation of any such investigation or any other concrete steps.”

Altieri can therefore only speculate that “Though the Vatican has not confirmed it, Pope Francis appears to have rejected the measure.”

So, we “People of God” – who according to Cardinal Gerhard Müller have a “right to know” – are being sidelined and ignored once more?

To make things worse, the leadership of the U.S. Bishops' Conference under Cardinal DiNardo does not seem to think, either, that American Catholics deserve an accounting of what their leaders and Pope Francis were discussing on September 13. While one grand jury after another is opening up investigations, the USCCB published a short statement, praising the atmosphere of the conversation with the Pope who attentively listened to them.

“We are grateful to the Holy Father for receiving us in audience. We shared with Pope Francis our situation in the United States – how the Body of Christ is lacerated by the evil of sexual abuse. He listened very deeply from the heart. It was a lengthy, fruitful, and good exchange. As we departed the audience, we prayed the Angelus together for God's mercy and strength as we work to heal the wounds. We look forward to actively continuing our discernment together identifying the most effective next steps.”

That was all that DiNardo told the Catholic world.

And what about the Apostolic Visitation, your eminences and excellencies?

LifeSiteNews did reach out to DiNardo's office, asking him whether he asked Pope Francis to send an Apostolic Visitation and what the Pope's answer was. Since he met with the Pope again today, he might very well have asked him again. But this silence from all these high-ranking prelates is telling.

As Christian Geyer points out in the Frankfurter Allgemeine Zeitung, it is the Pope who sets the example. And the Pope has not yet even started a canonical process against ex-Cardinal Theodore McCarrick, something that he owes to the many victims of McCarrick's evil deeds of sexual assault.

“Also Pope Francis will not be able to justify his silence (‘I will not say a word’) with the help of higher insights if he does not wish to discredit sustainably in his Church the principle of personal responsibility,” he explains, “quasi as a form of magisterial-authoritative teaching from the top down, certified by the example of the pontifex.”

Geyer concludes: “No wonder – but nevertheless appalling – that the German bishops believed to have to follow the example of their [pope] and made sure that there would be no mentioning of personal responsibilities – from bishops or even let alone from concrete dioceses – in the research design of the [German bishops'] abuse study.”

When on September 25 Cardinal Reinhard Marx was confronted about whether there were one or two bishops who seriously considered resigning due to their own guilt of sex abuse cover-up, he hesitated for a very short time and then “answered with short ‘no.’”

Then “people were relieved,” concludes Geyer.