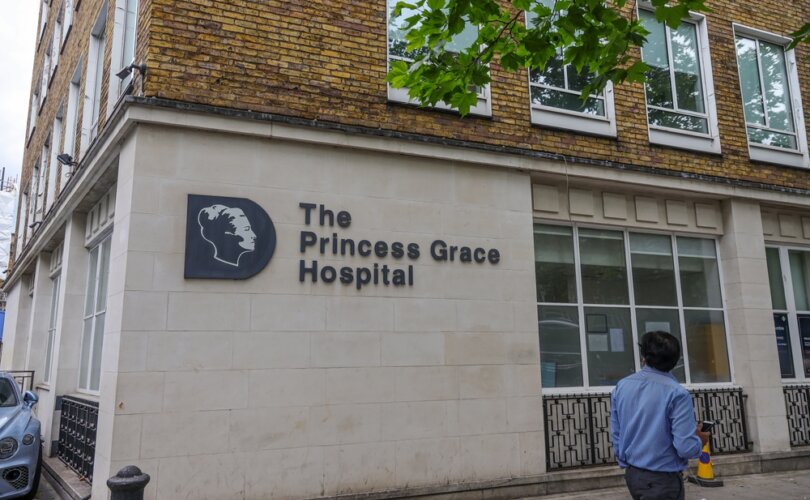 LONDON (LifeSiteNews) — The transgender movement has undermined many hard-won women’s rights over the past decade, but the most shameful aspect of the entire war over sex-segregated spaces is the refusal of trans activists to recognize the discomfort, distress, and even trauma that victims of sexual assault can experience when forced to share spaces with biological males.

The latest example, reported by The Daily Wire, is particularly egregious — a British hospital cancelled a woman’s life-saving complex colorectal surgery scheduled for October 10 after she requested all-female facilities but was confronted, at her pre-op assessment, with “a person she believed to be a biological male who identifies as female in a blonde wig and makeup.”

The woman is a sexual assault survivor and the assessment involved intimate procedures. The hospital responded to her complaint by cancelling the surgery. From The Daily Wire:

London’s Princess Grace Hospital told the anonymous woman it had to ‘protect staff from unacceptable distress’ and canceled her operation, according to The Daily Mail…The incident is currently being investigated by HCA, Princess Grace Hospital’s parent company. This prompted the woman, a feminist retired lawyer, to make an urgent request for an all-female nursing staff.

‘I began to wonder if it was just a coincidence that this member of staff with a ‘gender identity’ had made their presence felt to me in such an inappropriate way during my first visit,’ the woman told The Daily Mail. ‘I began to suspect that I had been targeted because my patient records showed that I refused to use pronouns and wanted single sex facilities, although I have no evidence of this,’ she said.

‘Then I began to panic that men would be attending to my intimate care at the hospital while I was immobilized for an entire week following major surgery,’ the woman continued. ‘It was a slow, dawning realization. I felt sick. Alarm bells were ringing in my head. I cannot describe the fear that I felt. I cannot rationalize it.’

The woman wrote to HCA stating that women should have access to all-female care: “Please do not make life difficult for women when they are at their most vulnerable by forcing them into uncomfortable and embarrassing situations. I cannot believe that I am the first patient to have raised this with you.”

CEO Maxine Estop Green responded by telling her that hospital staff must be protected from “discrimination and harassment.” Despite the patient begging the hospital to keep her appointment, the request was ignored. The feelings of trans activists were more important than her essential surgery.

“I am still in a state of shock at this punitive and discriminatory reaction by the CEO of this hospital which specializes in women’s procedures,” she said. “Everything that has happened is so off the wall and irrational…They will punish anyone who tells the truth. Women’s safety, dignity and privacy continues to be sacrificed on the altar of this quasi religion.”

She is precisely right. No matter how horrifying the situation, trans activists seem constitutionally incapable of empathy.

In Ontario, Canada a rape victim launched a lawsuit after being forced to share a room at a Toronto shelter with a bearded man claiming to be a woman. And there is a growing list of female inmates who have been sexually assaulted by men calling themselves women who are then transferred to female-only prisons—when one victim spoke out, the predator’s lawyer called her “transphobic.”

In short, the colonization of female-only spaces by the transgender movement has caused genuine and observable harm to women. This will keep happening until those having their rights trampled speak up with one voice.