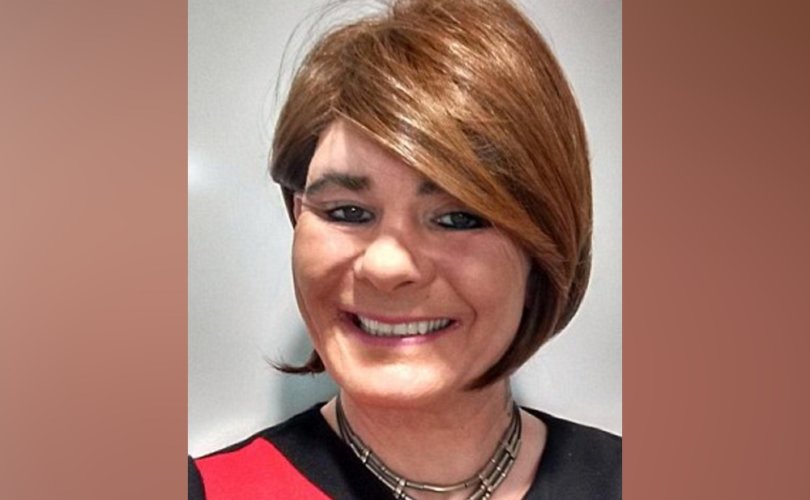 January 7, 2019 (LifeSiteNews) — Some of you may remember a story I reported on last year, where a biological male calling himself “Karen White” managed to get sent to a women’s prison in the United Kingdom. Upon his arrival there, he promptly began a spree of sexual assaults, the first of which occurred within days of his incarceration. He sexually assaulted four female prisoners — who, it must be remembered, were literally locked in with him — before prison officials decided that his relocation had been a bad idea.

It turns out that Karen White — who was once, more accurately, known as David Thompson — is not a fan of his latest lodgings, the notorious HM Prison Wakefield. White, who was sent to prison for attacking a 66-year-old neighbor with a steak knife, raping several women, and sexual offenses involving children, has stated that being locked behind bars with other rapists as well as murderers “doesn’t promote positivity.”

As a result, he’s begging friends to help him get a sex change, which will cost a cool 25,000 pounds — but will help him get back into a women’s prison. “I’m longing for the day the system sends me — more like forced to send me — to a female prison again,” he wrote. “But the only way I will achieve this is if I become a woman. Then the system will have no option but to send me to a female estate.” This surgery needs to be funded now, the 55-year-old wrote, because if he ends up on an NHS wait list it would take years and “I don’t think they would perform (it), partly because it is dangerous.”

Despite the fact that “Karen” essentially admits in this letter that he is still male (since he still has to “become a woman”), he still managed to dupe the prison system into setting him loose among a vulnerable female population, and mainstream newspapers are still dutifully referring to him as “her.” This is in addition to the fact that the court heard that White had used his “female persona” — an extremely unconvincing one to those of us who are sane, if you’ve seen his photo — to achieve access to more victims, and Judge Christopher Batty referred to White as a “highly manipulative predator.”

Karen’s letters tell what is supposed to read as a heart-rending tale. He is forced to give up his padded bras for security purposes, despite the fact that he feels they are a very important part of his identity. When he dresses as a woman, he wrote, he is mocked by other prisoners as a “freak” and a “weirdo,” which is very hurtful. “I don’t feel good, due to my surroundings and being forced to dress as a man,” said the man who raped several women, molested children, and tried to stab his neighbor.

The Justice Department declined to comment on Karen White’s much-publicized spasm of letter-writing, which is unsurprising considering the fact that they have yet to comment on the decision to send him to a women’s prison first, or whether those who made this decision bear some responsibility for the pain of the female prisoners who were sexually assaulted by this dangerous predator, who was (and is) legally a man. Presumably, they feel that there is nothing they can say that will make them sound reasonable or sane, and thus it is better to remain quiet and hope the whole thing blows over.

On the other hand, the Idaho prison system in the United States was recently ordered by a judge to provide a sex change to a prisoner who demanded one, and at the taxpayer’s expense. In today’s topsy-turvy gender-blender society, Karen White might just be in luck.