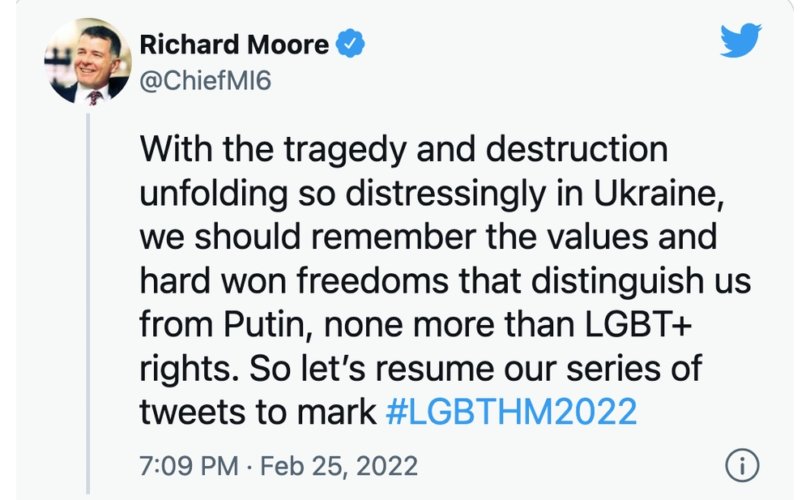 (LifeSiteNews) – As with all military conflicts, it is rarely the case that the outside observer knows the “whole story.” Regarding Russia and Ukraine, the story is more complicated than news-cycle soundbites can give justice to.

The recent Eastern European conflict has many layers to it, and one of those might the West’s hatred of traditional Biblical morality, which is manifesting itself in a knee-jerk reactionary position against Russia and for Ukraine. A tweet by the top spy in the UK alleges that LGBT issues are at the heart of the matter, and, a recent sermon by the Patriarch of Moscow makes essentially the same claim, only from the other side.

With the tragedy and destruction unfolding so distressingly in Ukraine, we should remember the values and hard won freedoms that distinguish us from Putin, none more than LGBT+ rights. So let’s resume our series of tweets to mark #LGBTHM2022

Russian Orthodox Patriarch Kirill unsurprisingly endorsing Putin’s narrative on Ukraine in a sermon today. According to him the West essentially organises genocide campaigns against countries that refuse to stage gay parades 🤯 pic.twitter.com/mXc89tXj4m

More on this later.

If you are anything like me, then you may not have been up on your late-twentieth and early twenty-first century Ukrainian and Russian history. Now, I am no expert, but I can at least digest what legitimate experts have said about the nations’ conflicts, and a refresher on the historical reality of the relationship between both nations is helpful.

I have found the following presentations to be most helpful, as both are offered by expert historians who truly understand both sides of the equation.

It is far beyond the scope of this piece to go into the depth required to understand the whole saga, I highly recommend consulting these resources after reading.

If you want to understand the Ukraine Russia saga, listen to this.

The first is a lecture by John Mearsheimer, and it seems almost like a premonition, or a prophetic utterance given recent events. He offers poignant analysis of the chasm in political thought that exists between the East and the West, and how Ukraine is in the cross hairs of that divide.

The second is podcast with historian Tom Woods who interviews Russian History expert Gilbert Doctorow on the subject.

Ukraine is the flashpoint between the 19th and 21st Century

When Mearsheimer says that Russia operates with a 19th century outlook, he does not mean her viewpoints are “backwards” or “regressive,” but that the idea of what a nation is, is different than the post-liberal conception the West operates with today.

Western Europe has largely secularized, and as a result is doing everything it can to rid itself of its cultural and religious patrimony. The EU is a woke and globalist organization par excellence, whereas Russia is not at all.

Russia may be ashamed – to a degree – of her Soviet era, but she is not ashamed of her nationalism or even desire to be a traditional world empire. Ukraine is not so different than her eastern neighbour.

After a period of soul-searching the fall of the Soviet Union, Ukraine began to solidify herself as a true Slavic cultural power, with a growth in traditional religious and political thinking.

Ukraine has a sizeable Russian population and history and it was impossible to develop any sort of Ukrainian unity without acknowledgement and even support of the Russo-Ukrainian contingency of the nation.

The nation was heading down a similar path to Russia in the global cultural landscape until just a few years ago.

Then, the modern West stepped in.

The West was not happy

In the decade leading up to the 2014 Coup that saw the conservative and traditionally-minded Ukrainian President, Viktor Yanukovych, ousted by a pro-EU revolution, Ukraine had angered the libertine West a number of times.

In 2008 her parliament worked towards the banning of “homosexualism” in the country with a government committee saying, ““Propaganda and expansion of homosexuality in the country form a threat to national security, contradict national interests and undermine the authority of rights and freedoms of human beings and family.”

In 2009 Ukrainian authorities denied Elton John and his partner the right to adopt a baby. The English pop icon may have been “married” in the eyes of Western nations, but to Ukraine he was just a single man, as men cannot marry men, therefore unable to adopt under Ukrainian law.

In 2012 Ukrainian parliamentarians went further on their crusade for traditional Christian values and re-submitted a bill to outlaw the promotion of homosexuality in public.

International LGBT groups were enraged, and at the time the vast majority of Ukrainians were not in favor of homosexual activity, to say the least.

It appears that the former president of Ukraine, Viktor Yanukovych, did not want his nation to be lost in the libertine post-liberal mess of the West personified by the desire of the EU to move in on Ukraine.

But after Yanukovych refused to sign a trade agreement and political association document with the EU, protests erupted in Ukraine in 2014. Although the pro traditional contingency in Ukraine was larger than the pro liberal, there was still enough anti-Russian animus to whip a significant minority into a frenzy.

Massive protests resulted in a coup, supported by the West, which saw Yanukovych ousted as he fled.

Recognition of Russian as an official language was ended, which Russian Ukrainians took as a form of ethnic cleansing – which it might have been – and the situation in Crimea began.

This event is labeled by the West as the “Revolution of Dignity.”

Zelensky is an LGBT hero

Zelensky is the third president since Yanukovych, and it is likely that he is a bit of a Western puppet.

He is a former comedian and actor, as well as Ukrainian dance-show champion, and of course, he is a rising star in the World Economic Forum – you know, the group who wants a Great Reset.

In addition, Zelensky is a big fan of Canadian Prime Minister Justin Trudeau, the same Trudeau who is an actor and former drama teacher. Zelensky even called him an inspiration. Could there be a more quintessential post-liberal archetype of the libertine West than Justin Trudeau?

@JustinTrudeau was one of those leaders who inspired me to join politics. pic.twitter.com/DZYwLDgvkv

Ukraine has not yet gone as far in the pro LGBT direction as the West, but under Zelensky they are making strides.

Pride marches are more common, and LGBT activists are even gearing up to fight for Zelensky’s Ukraine because they view the Russian alternative as unbearable.

Russia is in a true ‘Culture War’

It is certainly not the case that the entire conflict is heating up because of a pro-LGBT agenda, but it cannot be ignored either.

Putin has been chastised for years by world leaders and organizations for Russia’s anti rainbow mentality, and efforts to homosexualize that region have largely failed.

Those efforts were failing in Ukraine as well – even Elton John couldn’t catch a break! – until an opportunistic coup paved the way for a pro-EU anti-Putin political change.

The recent sermon from Patriarch Kirill of Moscow hammers home the point that Russian values, which are ultimately animated by Orthodox Christianity, are “anti-western” in that Russia’s customs and beliefs will not accept the push to secularize the world through the sexual revolution.

The Patriarch even said that the Russo-Ukrainian conflict in the Donbass was a “loyalty” test for Russia against the imposition of a “gay parade.”

For eight years there have been attempts to destroy what exists in the Donbass. And in the Donbass there is rejection, a fundamental rejection of the so-called values ​​that are offered today by those who claim world power. Today there is such a test for the loyalty of this government, a kind of pass to that “happy” world, the world of excess consumption, the world of visible “freedom”. Do you know what this test is? The test is very simple and at the same time terrible – this is a gay parade. The demands on many to hold a gay parade are a test of loyalty to that very powerful world; and we know that if people or countries reject these demands, then they do not enter into that world, they become strangers to it.

If Kirill is correct, then it gives a new layer to the term “Culture War.”

If we consider that the highest ranking prelate in the largest Orthodox Church, along with a leading British intelligence agent who said that LGBT issues are one of the fundamental things that distinguishes the West from Putin, then we see that the LGBT question is more than just a minor factor.

Add to that the fact that world’s most infamous satanist is calling on all of “humanity” to unite against Russia, and the plot thickens even deeper.