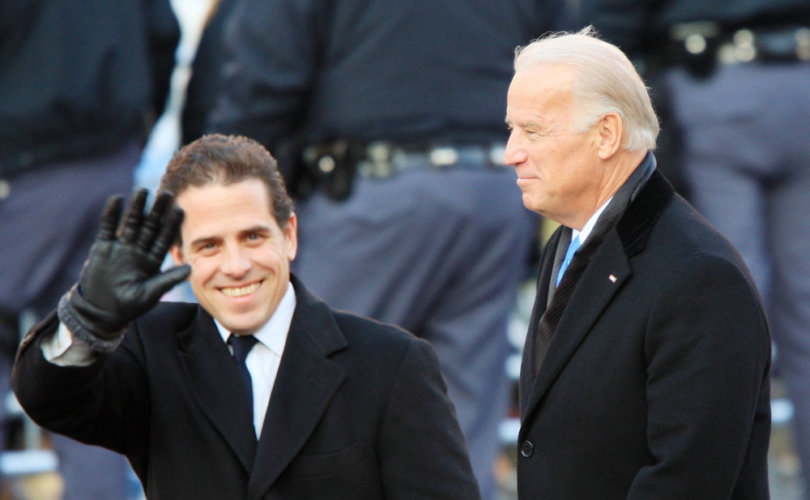 (LifeSiteNews) — Since its announcement, the Biden administration’s “diplomatic boycott” of the 2022 Winter Olympics in Beijing appeared to be more symbolic than substantive, as American athletes will still be competing while the U.S. diplomatic contingent of government officials stays behind. But even that symbolism was undermined this week by Press Secretary Jen Psaki’s confirmation that President Joe Biden will “absolutely” be watching the event, news that was predictably met with glee by Chinese state-run media.

None of this should surprise anyone who’s been paying attention, of course, given that China and the Biden family are infamously joined at the hip.

While known for years among knowledgeable conservatives, the subject broke through to the mainstream in early 2020, when Democrats tried (and failed) to impeach former President Donald Trump for asking the Ukrainian government to help investigate Biden’s role, as Barack Obama’s Vice President, in the ouster of a prosecutor who had been investigating his son Hunter Biden’s business dealings in the country.

Democrats accused Trump of abusing his power and pursuing baseless corruption claims for political gain, but months later it became even clearer there was indeed something rotten in Delaware.

That fall, the New York Post released a series of bombshell reports about a laptop Joe’s troubled son had abandoned at a computer repair shop in the Diamond State, which contained scores of emails and texts detailing how the Biden family made millions of dollars through Hunter’s facilitation of meetings between his father and business interests around the world — textbook influence-peddling.

Democrats, of course, tried to dismiss the story as “misinformation” even though its authenticity was ultimately corroborated, and their allies in traditional and social media worked to suppress word from getting out.

Of particular interest were the laptop’s revelations about the Biden family’s dealings in China, such as a deal in which Hunter would receive $10 million a year for three years from a “consulting” contract with CEFC China Energy Co. “for introductions alone.” Having a parent a heartbeat away from the leadership of the free world is nice work, if you can get it.

CEFC chairman Ye Jianming “[c]hanged that deal after we me(t) in MIAMI TO A MUCH MORE LASTING AND LUCRATIVE ARRANGEMENT to create a holding company 50% percent (sic) owned by ME and 50% owned by him,” the vice presidential son wrote in an August 2017 email chain. “Consulting fees is one piece of our income stream but the reason this proposal by the chairman was so much more interesting to me and my family is that we would also be partners inn (sic) the equity and profits of the JV’s (joint venture’s) investments.”

In October 2020, retired Navy lieutenant Tony Bobulinski, a former business partner of Hunter’s, came forward to corroborate the emails he had received regarding CEFC. “We didn’t go into too much detail on business, because prior to Joe showing up Hunter and Jim had coached me, listen, we won’t go into too much detail here, so just a high-level discussion and meeting,” Bobulinski told Fox News’ Tucker Carlson. “They knew exactly what they were doing. They were dealing with a Chinese-owned enterprise run by Chairman Ye, CEFC, that had strong financial support and political support from the Chinese Communist Party.”

Bobulinski says that at one point he asked Joe Biden’s brother James, “aren’t you concerned that you’re going to put your brother’s future presidential campaign at risk — the Chinese — the stuff that you guys have been doing already in 2015 and 2016 around the world?” He says James answered simply, “plausible deniability.”

It gets worse. According to veteran investigative journalist Peter Schweizer, the Bidens have done “five deals in China totaling some $31 million arranged by individuals with direct ties to Chinese intelligence — some reaching the very top of China’s spy agency.”

On January 27, Schweizer detailed all five deals in a harrowing report for the New York Post. Among them are a $20 million deal with investment fund Bohai Harvest RST, facilitated with the help of Communist Party official Zhao Xuejun (AKA Henry Zhao); a $5 million deal with Burnham Asset Management, also facilitated with Zhao); a $188,000 deal with Gemini Investments, which was controlled by a company chair by the head of another corporation linked to Chinese intelligence services; and more dealings with the aforementioned CEFC.

“Americans deserve answers as to why the Bidens received some $31 million and what promises or influence it bought,” Schweizer writes. “If Washington is to restore what’s left of its credibility, Congress must launch wide-ranging and serious investigations into the Biden family’s China cash haul and the resultant national security implications.”

Of course, deserving and getting are two different things. The current Congress lacks the will or the interest to investigate, and the Justice Department is firmly in Biden’s pocket. So the Biden’s chumminess in China will continue until the institution with the power to hold them accountable come under new management.