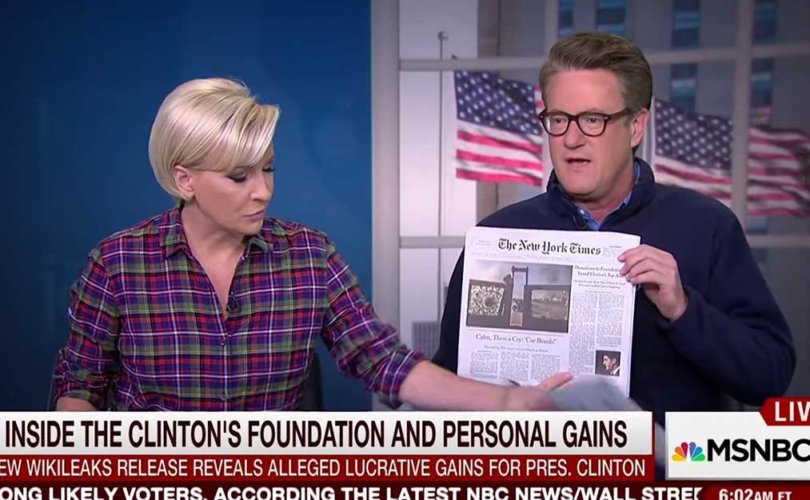 Editor's note: The views expressed herein are solely those of the author and/or the personalities in the videos included.  As a non-partisan public charity, LifeSite does not endorse these statements and takes no position on political candidates.

I will quote some of this 20-minute trashing of the “sleazy” Clintons, and even astonishing defense of the Trumps in comparison to the Clinton's “ethical and moral deficit”, but you have to watch the video to understand the inevitable sea-change that is about to happen within the liberal camps regarding the Clintons.

“Whoah! This Clinton leak thing. Look at this! The New York Times, 'Concerns Over Donations to the Clinton Foundation Vexed Top Clinton Aides.' We’re just absolutely horrified what they [the Clintons] have gotten themselves involved into, that they walked into this campaign with all this and I guess it verifies what you [another panel member] said at one point yesterday, the belief of everybody that 'there is no fixing this, there is no quick fix, there is no good answer'.”

Scarbough goes on, “The Washington Post is absolutely fascinating on Bill Clinton. $66 million dollars to him personally, and they’re bragging. They’re bragging in the memo that they can shake down the same corporations that they’re taking foundation money from, that they can shake them down for $66 million dollars for quote, Bill Clinton, Bill and Hillary Clinton personally.”

Scarborough then asks, Glaude Jr., Chair, Dept. of African American Studies at Princeton, “Does that confirm what you and a lot of Clinton sceptics that supported Bernie Sanders were worried about all along?”

An “ethical and moral deficit.” He could not bring himself to say that this is in fact likely illegal, criminal activity by the Clintons.

“They’re actually bragging about being able to shake down Foundation clients for Bill Clinton money. Doug Band is bragging about it,” repeats Scarborough.

Doug Band, a former aid to the Clintons, co-founded Teneo, a consulting firm that operates to specifically raise funds for the Clintons.

Panel member Willie Geist reveals another shocker. He says, “You know what’s really interesting is that this was initiated by Chelsea Clinton, Chelsea Clinton went to the family’s attorneys and said that she was worried that Doug Band was, quote,'hustling', that he was hustling business and funnelling it to her father.”

Scarborough understands Band was doing what the Clintons were directing him to do, stating, “Does anyone in America believe that Doug Band would be doing anything that Bill and Hillary Clinton didn’t want Doug Band to do?”

Mika Brzezinski follows up with, “It’s one these situations, when you really get through it, and we will look at it point by point. You have to wonder about being  careful about throwing stones, because I love the way everyone calls the Trumps, you know, 'sleazy', 'trashy', whatever because of a picture and money they take from one company and give to another as a donation, as opposed to their own money, all legal.”

Well, what do you know! What the Trumps did is finally acknowledged as being legal, while it is becoming unavoidably clear that the real “sleazy” ones are the Clintons.

Referring back to the Clintons, Scarborough charges, “This is sleazy and everybody knows it’s sleazy. The world is used, you are shaking down the world for $66 million dollars instead of a Rolex watch and a life-sized portrait,” comparing the previous liberal bashing of Trump over those two items he recieved as being nothing compared to the multi-millions of the illegal Clinton transactions.

And it goes on. Watch the full video.

And here is another one from CNN:

The Clintons, especially thanks to Wikileaks, are finally getting their due. The world is waking up to this nefarious couple and the picture is getting progressively uglier.

The evidence of Hillary Clinton’s bigotry reflects a disturbing reality