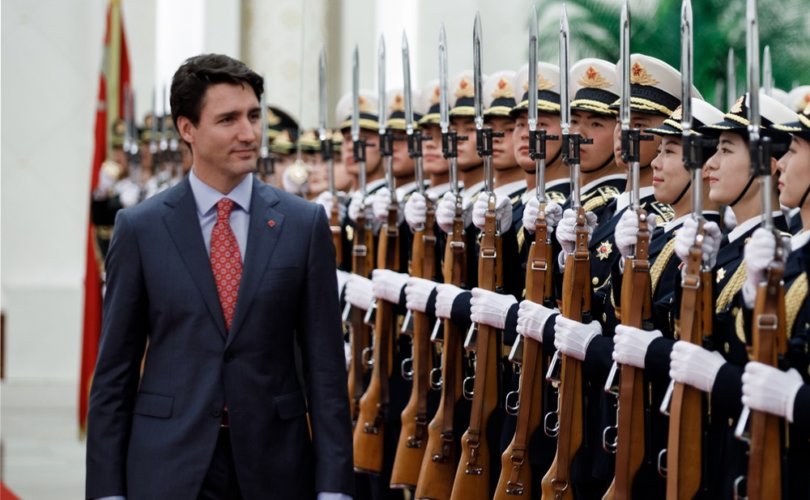 December 20, 2017 (LifeSiteNews) – I’m the same age as Canadian Prime Minister Justin Trudeau, and I have a question: has he forgotten what Soviet totalitarianism was?

I don’t know who turned up in his elementary school, but children who had recently slipped out from behind the Iron Curtain appeared in my elementary school in the 1980s. They were quiet, and a little secretive, as if their parents had pressed upon them their whole lives the importance of not telling anyone their business.

By high school they had relaxed. They opened up more. Yugoslavs (as they still were then) discussed inter-ethnic rivalries. Hungarian girls mentioned a priest-refugee at their church who had been imprisoned by the Communist regime. Come to think of it, there was a Polish priest-refugee in my own parish church. The grown-ups said that “Father Andrew” had been sent to Canada for safety after another priest, Father Jerzy Popiełuszko, was beaten to death by the so-called Security Services.

My parents took Maclean’s magazine, the Toronto Star, National Geographic and Time, so I grew up reading, not just about Justin’s Prime Minister dad, but about life in United Soviet Socialist Republic and the satellite socialist republics it controlled. I knew, for example, that it was very hard to be a Christian in these countries. When I joined the pro-life movement at eighteen, I learned that many women in the USSR had multiple abortions.

Communist totalitarianism stomped on religious freedom and drove women to abortion. That’s why I was so shocked to read that Justin Trudeau wants to impose pro-abortion loyalty oaths on Canadian businesses who seek funding to hire students through the Canada Summer Jobs program.

According to a government information package to all Members of Parliament, employers who want to participate must now attest that:

And I wasn’t the only one to be shocked. Pro-life allies from Poland and Russia told me I was right to be reminded of the bad old days of Communism. Maciek Kwiatkowski, who lives in Warsaw, linked to our story on Facebook and announced: “The Canadian march towards totalitarianism is proceeding briskly. General Jaruzelski [the last Chairman of the People’s Republic of Poland]  would be proud of the revolutionary attitude of Justin Trudeau.”

Maciek told me that in Poland’s Communist era, the Christian who did not abandon his faith and sign on with the officially atheist Communist Party wouldn’t do well materially.

“He had no chance of getting a career above a certain level, and no chance to work in managerial positions,” Maciek wrote.

“In principle, there were no private companies, and if there were any, if the owner deviated from communist orthodoxy, the authorities could close his business at any moment.”

One big difference he sees between Poles under the totalitarian regime and other peoples in western democracies today is that the state didn’t succeed in convincing Poles what to think.

My friend Ilya Kotlar, from south-east Russia, told me that in the USSR, all members of the Communist Party and other communist organizations, like “Communist Youth”, were supposed to be atheists. They signed their consent to this when they were admitted. If they were caught going to church, they could be expelled from the Party or the organization and become social pariahs.

As in Poland, belonging to the Party was never obligatory, Ilya told me, but it was “more and more important, the further up you moved in your career.”

“I heard from my grandfather that his father in the 1930s was [invited] to join the Party,” said Ilya. “But he refused specifically because he would have to renounce God.”

That reminds me of stories I’ve been told by friends and in-laws about other fathers, fathers born in communist former Yugoslavia, fathers born in communist Romania. These men turned down invitations from the Party and thus career opportunities and more material advantages for their families because they were Christians and wanted to stay that way. And I’m sure that, if Trudeau’s plan goes through, scores of Canadian business owners will opt out of the anti-Christian Canada Summer Jobs program. But as a Canadian it hurts me deeply that they will have to make that choice.