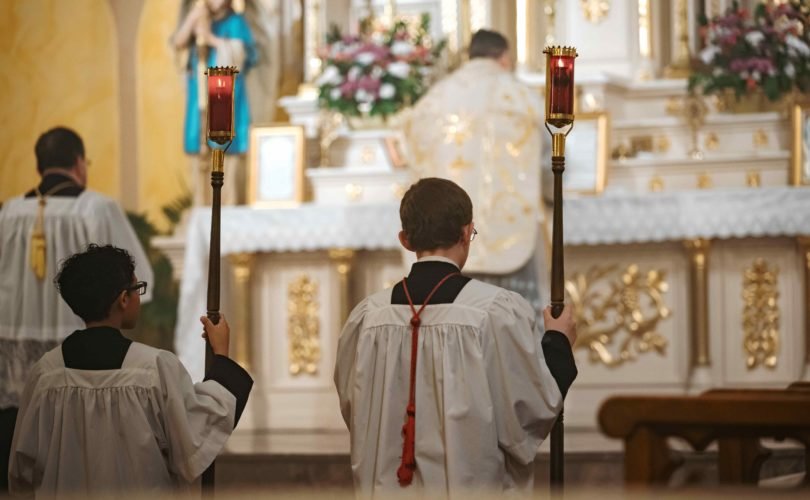 May 11, 2021 (LifeSiteNews) — What exactly is “solemnity”? The etymology of the word offers some clues. As Anthony Lo Bello writes in Origins of Catholic Words (p. 453):

The Latin adjective sollemnis is the combination of two words, sollus, an Oscan form of totus meaning whole, and annus, which means year. Sollemnis means that which recurs annually. Such recurring occasions were considered especially holy. From this adjective there was formed the noun sollemnitas for the name of such a festivity.

Implied in this derivation of the word is the religious sense that worshipers have of the special nature of recurring observances like the Annunciation, Christmas, Good Friday, Easter, Ascension, Pentecost, Corpus Christi. Each of these is not just a recollection of a past event, but a making present anew of the mystery and power of the event, as our souls are plunged into it by the grace of the liturgy and the sacraments. For this reason, the term sollemnitas came to be applied not only to the “high” occasions such as the ones listed, but even to the commemorations of minor saints and to the fullest manner of offering the daily Eucharistic Sacrifice, which we call the Missa sollemnis or “solemn (high) Mass,” with priest, deacon, and subdeacon, acolytes and cantors. The term solemnity, therefore, describes at once the liturgy offered, the occasion of the offering, and the manner of its offering.

Accordingly, St. Thomas Aquinas writes about the Holy Eucharist: “Because the whole mystery of our salvation is comprised in this sacrament, it is therefore performed with greater solemnity than the other sacraments” (Summa theologiae III, qu. 83, art. 4). Here, he uses the noun to refer not to a rank of day, but to a quality that should never be absent — not a minimalist checking-off of “form and matter” as criteria of validity, but a certain fullness of form and matter, as criteria of fittingness and authenticity.

Yet has not the word, and even the concept, of solemnity more or less vanished from the Catholic landscape in the past half-century? It is rare to find people who would understand St. Thomas’s point, let alone make it their own. We can no longer assume that its truth will be evident — especially (alas) to the professional caste of liturgists, who have a remarkable tendency to write off past concerns for maintaining a proper stance toward the sacred as “superstitious,” “magical,” “mechanical,” or “unenlightened,” and who even go so far as to deny the distinction between sacred and profane. To see why Aquinas is correct, we must define the term he uses. In this way, we can more effectively reclaim it in our conversations and, above all, in our practices.

Solemnity is seriousness about the sacred. It is defined objectively by ceremoniality and subjectively by humility and reverence.

When we approach the sacred, we do so using handed-down cultic forms that we have neither invented nor would dare to modify at whim. They are stable, impersonal, collective, venerable, precise, and lofty in style. The one using them sees himself as a recipient, transmitter, instrument, “mouthpiece” for the performance of inherited cultic forms, which he respects as the property of another, and as an act of homage to God who must be approached with faith and fear.

Deviations are thus possible in regard to any of these qualities. For example, a minister could use the cultic forms without deviation, but do so in a rapid-fire way that suggests he does not truly grasp the magnitude of what he is saying and doing. Instead of doing something divine that makes him tremble, he seems like a newscaster reading the news or an auctioneer managing bids. This is a lack of due subjective disposition, and therefore a failure in solemnity, regardless of the “propriety” of what is done.

On the other hand, a priest who is pious, sincere, and reverent can err by acting toward God in the sphere of public liturgy as if he is simply praying in the privacy of his room: using colloquial language, inventing things as he goes along, essentially dragging the congregation through his personal devotions, presuming and projecting an intimacy that may or may not be real, and which is certainly not appropriate for the reenactment of the mysteries of salvation. The liturgy is not the time for my or your intimate life to be put on display (much less for my or your feeble attempts at expressing the inexpressible), but for Jesus Christ to be put front and center before all of us, in the mysteries of His life, death, resurrection, and ascension as conveyed in the precise and poetic language of tradition. The “sincere priest” who makes the liturgy a vehicle for his personal devotion fails in the objective dimension of solemnity.

Returning to the Mass in particular: The objective and subjective dimensions of solemnity come together when, and only when, the Mass is understood to be — and is therefore treated as — the unbloody representation or renewal of the sacrifice of Christ on the Cross, which unites man and God, earth and heaven, time and eternity. In this sacrifice, the Lord Jesus is present in His glorified state, risen, immortal, reigning forever — which is part of the reason we celebrate the liturgy not as if in mourning over one who is dead, but rejoicing spiritually in one who is indestructibly alive. We honor and glorify Him as our King with solemn splendor and devout decorum, sparing no extravagance. Something analogous is true of a Low Mass piously offered: it is a pure homage of prayer, verging on contemplation. It is not a seeking of the dead, but of the living God (cf. Lk 24:5). The liturgy does not have to be “animated” from without, since it already contains Life and the source of all life; in that way it is impossible for traditional liturgy ever to become a “dead thing,” contrary to the opinions of liturgists.

— Article continues below Petition —
PETITION: Call for Vatican to rescind restrictions on private and traditional rite Masses at St. Peter's
Show Petition Text
19347 have signed the petition.
Let's get to 20000!
Thank you for signing this petition!
Add your signature:
Show Petition Text

Tragically, the Novus Ordo, symbolic of our age of decadence, has undone both the magnificence of High Mass and the prayerfulness of Low Mass, dealing a death blow to the causes and effects of solemnity. Instead of bringing us to bow down before the Lord of Glory, raising us up to sit with Him in the heavenly places (cf. Eph 2:6; Col 3:3), it ritually crowns Him with thorns and offers Him mock homage by taking the focus of the Mass off of His mystery and placing it on the celebrant and the community, “the presider and the people.” It is as if the Mass, in its populocentric busywork, boredom, noise, and verbosity, its lack of nobility and of palpable devotion, is the best plan its architects could devise to ensure that the Lord’s heavenly glory will not be perceived or confessed, and that He will remain, as it were, nailed to a tree, powerless and lifeless. This should not be tolerated by Catholics.

Because the whole mystery of our salvation is comprised in the Most Holy Sacrament of the Altar, it is — or it surely ought to be — performed with great solemnity. In company with the Angelic Doctor, we will not only maintain and profess this fundamental truth, but we will do our utmost to worship in accordance with it, and to find a community built upon it. Never before has it been more important to guide ourselves not by convenience or by what’s “good enough” (for whom? for what?), but by the righteous offering of holy ceremonies that honor the Lord with humility and reverence.