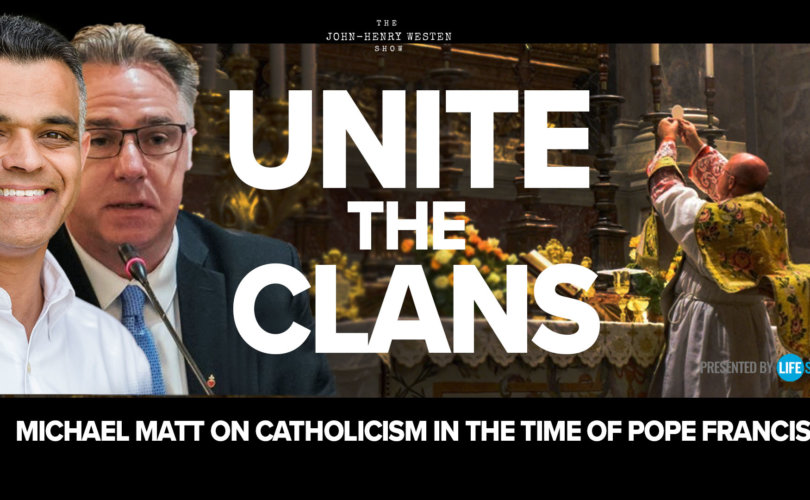 Unite the Clans: Michael Matt on Catholicism in the time of Pope Francis

October 8, 2019 (LifeSiteNews) — Today in Rome I had the pleaure of sitting down with Michael Matt, editor of The Remnant Newpaper. Earlier this week, Michael and I participated in Voice of the Family’s Amazon Synod Roundtable discussion. For this episode 32 of The John-Henry Westen Show, he and I talk about a wide range of issues, including his family background, traditional Catholicism, and his “Unite the Clans” initiative.

Matt told me that his “cantakerous” German Catholic ancestors heeded the call of Pope Leo XII to defend the Faith and became journalists. He said the perception some might have of him isn’t true, and that he is really interested only in upholding the Faith and “respecfully resisting” those who want to drastically change it. “I was well catechized by Catholic nuns,” he told me. “There seems to be a different message” sent by the Church today.

Speaking of men like Michael Davies and French archbishop Marcel Lefebvre, Matt says that it “broke their heart” to “be at odds with the pope.” But it’s simply “not reasonable” to believe that the Church finally got Catholicism right in 1965. We cannot be right today and have been wrong for two millennia, he said.

Matt, a father of 7, told me he wants to be able to dispense with the “traditional Catholic” label. He said he feels “a lot of hope” in these times and that he’s not interested in “telling someone where to go to Mass.” Rather, he wants to unite the various Catholics who make use of the FSSP, SSPX, ICKSP, etc. for Mass and “focus” their efforts on “a common cause.”

“Let’s stop attacking each other,” he told me. “This is a golden opportunity to become more constructive.”

He and I also spoke about St. Louis de Montfort; the Chartres Pilgrimage he runs; and the Catholic Identity Conference, an event he began organizing several years ago. “Humanly speaking,” Catholics must do everything they can to “help” those who see the crisis, including clergy, he said. Ultimately, though, “this Church is too big for us to fix…the only one who can save the Church is God.”

Matt said that going forward, tradition-minded Catholics need to “have Christian charity” toward other Catholics who don’t see eye to eye with them. We need “a united front.” We need to “restore all things in Christ,” he said, and that includes homeschooling, the Latin Mass, praying the rosary, and everything else about our faith.

You can send me feedback, or ideas for show topics, by emailing [email protected].