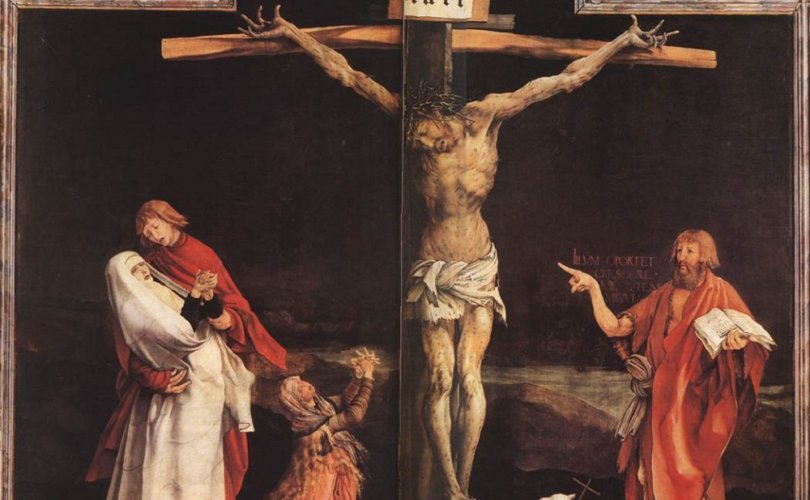 January 21, 2020 (LifeSiteNews) — When I first came across the following words by Dr. Alan Keyes, I knew that I was face to face with a man who really understands the magnitude of the evil we are fighting and is unafraid to speak it openly, so that he might convict hearts of sin:

Every time abortionists rip a child limb from limb within the womb; every time they crush the fragile head; every time they scorch the life from its body with a death dealing solution; every time they scrape its nascent cells of life from the walls of a womb — Jesus is savagely beaten again; his skull pressed down with thorns; his limbs pulled savagely in their sockets; his hands and feet pierced through with nails; his breath drawn with fiery pain; his life finally extinguished; every time.

The unborn child is, indeed, a child, a human being. Not only have modern embryology and genetics done nothing to shake a truth so evident to all; on the contrary, they support it a thousandfold. That is why eminent geneticist Jérôme Lejeune could bear witness in courts all over the world: modern science shows that there is no fundamental biological discontinuity in the entire process from fertilized ovum to born child and beyond. If one invents a right to kill the former, one logically must invent a right to kill the latter; if one can kill the latter, there is no end to what life-extinguishing policies governments may approve, as we already see in the spread of euthanasia.

We have now university professors who are coldly “rational” enough to draw the conclusion: since we have legalized abortion, we ought to legalize the killing of small children when they are severely disabled — or perhaps simply unwanted. Dr. Lejeune saw that either you must defend innocent human life from beginning to end or you have to maintain that limits on killing are purely pragmatic and can be changed at will by legislative fiat. In a world that prides itself on the fragile construct of a “social contract” in which we all belong to the state in exchange for protection of our basic rights, this amounts to selling all your goods in order to purchase a field of quicksand, and then walking into it.

Twenty nineteen was a year of heartening victories and harrowing losses for the pro-life movement. Perhaps strangest of all, however, was the continuing subtle undermining of pro-life efforts coming from an unexpected quarter: Pope Francis.

The pope’s preoccupation with abolishing capital punishment, going so far as to double down on his claim that longstanding Catholic doctrine can and should change on this matter, reanimated an almost defunct “seamless garment” or “consistent life ethic,” which has never accomplished anything more than to diffuse attention from the plight of the unborn slaughtered in their millions.

Consider some statistics. According to Amnesty International, 23 criminals were executed in the USA in 2017. According to the Guttmacher Institute, 862,000 abortions were performed in the USA in the year 2017. For each convicted criminal whose life was required of him by justice, nearly 37,500 babies were killed for no other “crime” than that of existing. Statistical models estimate that 56 million babies were aborted across the Earth per year in 2010 to 2014; in comparison, about 1,000 were sentenced to death in the year 2017. That would be a ratio of 56,000 babies per 1 execution. Another way of seeing the difference: there are 525,600 minutes in each year. Worldwide, therefore, over 100 children are aborted every minute; in the USA, almost 100 children are aborted each hour. In contrast, 1 person was executed every 9 hours somewhere in the world in 2017; in the USA, it was 1 criminal executed every 16 days on average. These comparisons are mind-boggling.

I am not asserting that the lives of criminals do not matter, nor that some of the executions (especially in Islamic countries) are not unjust. What I am simply trying to show is the sheer disproportion between judicial executions, which are in theory defensible, and the slaughter of the unborn, which cannot under any circumstances ever be defended, not for a single child.

The so-called “seamless garment” is a diabolic ploy to turn our gaze away from the most egregious moral evil the world has ever seen to something that is much more debatable and ambivalent. What Pope Francis has done is to create the illusion that, for the Catholic Church, the death penalty question is as big a deal as other life questions. But it is nothing compared to abortion (and, increasingly, euthanasia).

We saw the bitter fruits of Pope Francis’s silence in the betrayal of Ireland’s Catholics during the abortion referendum in 2018. The Irish received zero support from Pope Francis in defense of the unborn, in spite of his relative popularity with progressives, which might have made some difference. He provided no help when it was most desperately needed, and when any worthy successor of the apostles would have spoken out clearly, as Pius X did in his encyclical letter Vehementer Nos when protesting against the evil actions of the French government in 1905. The Irish Times ran a headline: “Pope Francis’s non-judgmental style influenced abortion Yes vote” (July 17, 2018).

The crisis of morals, nay, of intelligence, has reached such a grave point that our bishops are no longer even capable of distinguishing between different kinds of dignity that people have. Bishop Frank Dewane of Venice, Florida, stated: “All human beings are created in the image and likeness of God, and the dignity bestowed on them by the Creator cannot be extinguished, even by grave sin” — as if this has any bearing on the death penalty — and noted that Benedict XVI had urged “the attention of society’s leaders … to make every effort to eliminate the death penalty” (source). The same news story quotes Msgr. Stuart Swetland: “Theologians have been arguing that we could make this next step, as a true development of doctrine: to intend the death of a human person violates their human dignity and that the death penalty is always and everywhere non-admissible.”

Remarkable! A bishop cannot see that eliminating the death penalty for practical reasons is not the same as saying that the death penalty is per se immoral, as Pope Francis maintains. A noted monsignor cannot see that “development of doctrine” does not mean contradiction of Scripture, Tradition, and reason. Neither of them can see that the death penalty is not directed against human nature or the person as such, but against the criminal as a criminal, which is a highly relevant aspect for the State to consider. Nothing, in fact, more emphasizes human dignity than the realization that moral actions have consequences; evil may be punished not only in the world to come, but even here and now.

Why isn’t God at fault when He intends the death of a human person? Because He has authority over life and death. The traditional Catholic view is that the State derives its power from God and, to a certain extent, stands in His place, and therefore shares in this power. Bradley Lewis rightly commented: “If executing those guilty of capital crimes is wrong, why is this not the case with the intentional killing of enemy combatants in a just war? If the protection of the common good does not authorize capital punishment, does it no longer justify killing enemy soldiers?”

In spite of Pope Francis’s diffusive and divisive efforts, and in spite of the left-leaning politics of too many Catholic bishops who are worse than useless when it comes to defending the Church’s rights and natural law morality, the pro-life cause remains strong and focused on the supreme moral evil of abortion, which contradicts the most basic right of all human persons.