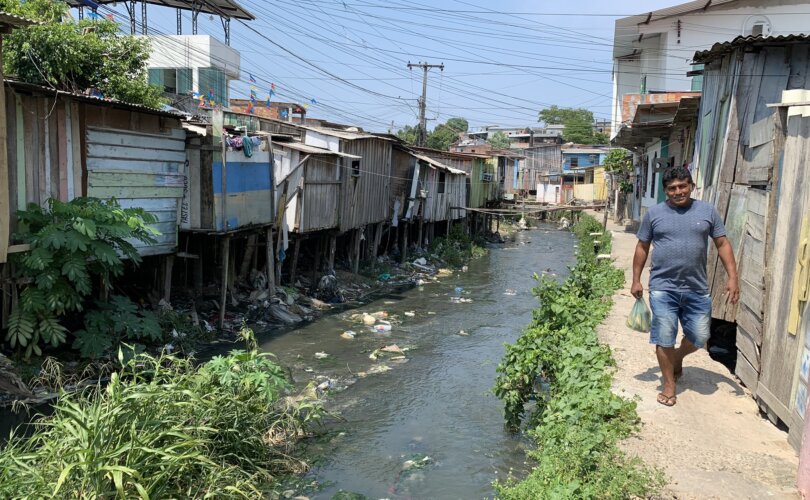 (LifeSiteNews) — I’ve not spent a significant amount of time among the world’s poorest people. Sure, I’ve volunteered at clothing shelters, food banks, and have given out a fair share of money to beggars on the streets here in America. But I’ve never helped those who are actually the least well off in the world.

A friend of mine who works with a group called Amazon Relief recently told me about the time he spent with such people in Brazil. He said the experience was life changing.

“The shocking level of poverty was rivaled only by their unflinching love for and faith in God,” he said, while showing me pictures of priests, laity, churches, and families living in an area of Manaus – Brazil’s seventh largest city – that’s called “The Green Hell” due to its extreme lack of basic resources like housing, drinkable water, and health care.

“Amazon Relief,” he continued, “saw the depraved conditions in the region and jumped into action to help these beautiful children of God with what they needed the most – food, clothing, and everything else God calls on us to give to the poor. You don’t see this level of poverty here in America.”

I was able to speak with Amazon Relief founder Jim Flickinger – a successful lawyer from Grands Rapids, Michigan – via email. I wanted to learn more about why he founded it in the first place and what his experience has been like leading the group, which is asking for donations. Scroll below to read about his fascinating organization.

What year did you begin Amazon Relief? Why did you start it in the first place?

In the early 1990s, wars broke out in Croatia, Bosnia-Herzegovina, and Kosovo (the Balkan Wars), and I got involved with taking medicine and medical relief supplies into the war zones.

In 1995, the wars were tapering down, and some people I knew told me about a need for children’s clothing in the Amazon. I mentioned to them that because of my relief work in the Balkans, I had access to large quantities of clothing. I said I was willing to travel to the Amazon to see the need and make arrangements for the shipment of children’s clothing.

When I first arrived in the Amazon in 1995 (in an area called “The Green Hell”) I was overwhelmed by the poverty. People were living in shacks built over fermenting sewage. The shacks were made of broken pieces of wood. Some of these dwellings did not even have four walls, and some of the walls were simply cardboard. Malnutrition was everywhere. There was a great need for help with education of the children. And there were 45,000 lepers living in the area.

When I had first encountered the problems of refugees and war victims in the Balkans, my heart went out to them and I developed a motto: “I can’t do everything, but I will do everything I can.” When I saw the tragedy in the Amazon, that motto resurfaced and I made a commitment to do everything I could to help alleviate the problems.

What is it you seek to accomplish with Amazon Relief?

Initially, the focus was twofold. First, we began operating two Catholic schools to help the children who were living these areas of extreme poverty. These children were 7-14 years old but with a pre-kindergarten level of education. We hired teachers who understood the unique problems of these children (malnutrition and coming from families where the parents could not read or write and from homes where there was no place to study). In addition to special educational care, we fed these children a meal each day at our schools. Our goal was to stop malnutrition and bring these children to a level where they could transition into the public school system in the second grade. Second, we also began giving assistance to victims of leprosy.

As the years went on, our goal extended far beyond giving immediate aid to these children. Our goal was to change their lives. Even though they transitioned into the public schools at second grade level (and ahead of their peers!), we began offering tutoring, computer and library facilities, vocational training, and college assistance.

And changing their lives has been happening. With an education, jobs are available — and we have graduates of our programs who are now accountants, teachers, lawyers, dentists, and in virtually every other type of employment. And the lives changed are not only our students’ lives, but those of their future spouses and children.

Beyond all this, our goal is to work for the eternal salvation of the people we serve.  Our children are getting a Catholic education. In addition, our work goes out over vast areas of the Amazon. We work with bishops and missionaries to take the Good News to isolated indigenous tribes. We fund formation costs for priests, deacons, and lay leaders. We sponsor retreats and adult religious education programs. We have built 56 churches. We are working to install SmartTVs or projectors in remote communities where priests are not available so that there can be a weekly Liturgy of the Word service with a homily prepared (and put onto a memory stick for broadcasting on the TVs or projectors). These homilies are prepared by the bishop or a priest from the area. We also are having sacramental and Bible study programs of the Augustine Institute in Denver converted into Brazilian Portuguese for use on the SmartTVs and over WiFi.

What have you learned during your time running Amazon Relief? Any big ‘life lessons’ that you’d care to share?

Sometimes we look at all the needs in the world and they can be overwhelming. We think we cannot make a difference, but it’s not true. Each of us can make a difference — a huge difference in someone’s life. I look at our schools and see a child who is being fed each day and getting a good education — and it costs about $25 per month. A life is being transformed, all because someone donates that $25 per month. And but for that $25 donor, there would be one less child in our schools. We also have had people pay for one or more of the churches or chapels we have built — and these churches or chapels will bring the Good News to thousands of people for decades. It is amazing the impact of just one donor at any level.

Do you have any favorite memories you’ve had from your time running Amazon Relief?

One time I was visiting a bedridden lady in a leprosarium. We spent time talking, we prayed together, and then I offered to sing for her. Amid my singing, she started to cry. I finished the song and asked her the reason for her tears. I smiled and said, “Was my singing that bad?” She replied, “Oh, no. I love your singing. But usually someone walks by my room, waves to me and keeps on going. Or some people will look in and ask how I am doing, but when I reply, they smile and proceed down the hall. But you — you come to me, you visit, you pray, and you sing. You care for me.”

Why should someone get more involved (or donate to) Amazon Relief?

First, because of what we are doing. We aren’t just feeding people today but not making a change in their lives. We are changing lives. Education has been the key, and after 27 years of serving we see the results. Graduates of our programs are employed and have broken free from lifetimes of poverty. This is important for them, their families, and their community. We are also present and assisting victims of leprosy.  We are. helping indigenous people with their educational and medical needs.  And we have soup kitchens, educational programs, and other outreaches to the poor.

Second, because our goal isn’t just material aid. It is to get the people to Heaven.

Third, because 100% of every donation is used to help the Amazon. We take nothing out of any donation for administrative or any other costs. We either pay these costs out of our own pockets or from a fund that was established 25 years ago to cover any administrative costs (the donor wanted to assure that 100% of everyone else’s donation would go to serve the poor).

Fourth, because we do not serve from a distance. We travel to the Amazon 2-3 times per year and spend time with the people. Our presence and love is one of the greatest gifts we give.

We are called to serve the hungry, the thirsty, the naked, the sick. Whatever we do for them, we do for Him.