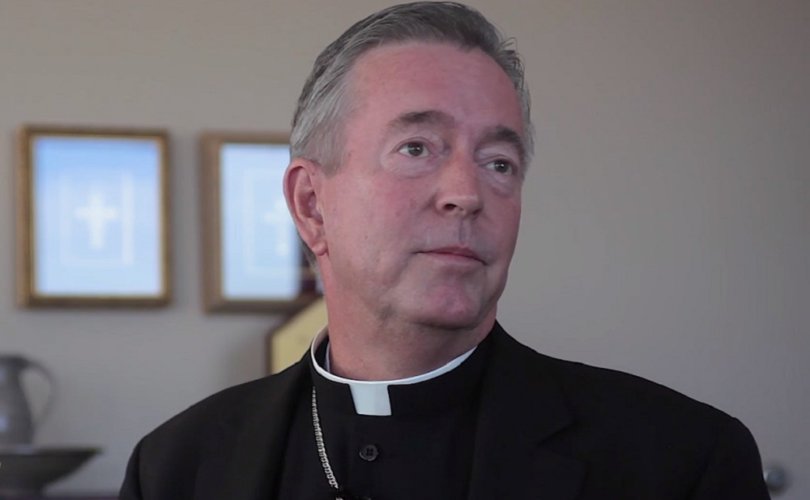 April 2, 2020 (LifeSiteNews) — It is no surprise to any Catholic with a pulse that there are profound differences of opinion about the sacred liturgy. We can see these coming to a head in a memorandum or “clarification” from the Most Reverend Peter Christensen, bishop of Boise, dated February 28 but published only in the latest edition (March 27–April 9) of the Idaho Catholic Register.

In this memo, the prelate tells his presbyterate that (1) they should not consider trustworthy any websites or sources not approved by the Vatican or the USCCB; (2) priests must face the people when celebrating the Novus Ordo; (3) Communion shall be received standing, and no altar rail or prie-dieu is to be set out for the use of the faithful; (4) priests must inform the bishop of any celebration of the “Extraordinary Form,” which is to remain marginal (5); priests must refrain from any “mixing” of the customs of the two forms of the Roman Rite.

There is much that can be said to refute each of these points, but my purpose in the present article is to point out two factual falsehoods in the bishop’s memo. As a scholar, I am particularly concerned that no one, regardless of what position he holds, should resort to falsehoods in making his case. I will not call the two falsehoods “lies” because that implies deliberate intention to deceive. At the same time, ignorance in such matters is a matter of culpability for pastors who have a duty to know what they are talking about.

1. The Latin of GIRM 299 has been analyzed by many Latinists who have shown, grammatically, that it either cannot or need not mean what the bishop says it means — and this is important, as he rests his case on the GIRM. A helpful article at Corpus Christi Watershed gathers together various sources on this paragraph. Fr. Zuhlsdorf proposes the following translation:

The main altar should be built separated from the wall, which is useful wherever it is possible, so that it can be easily walked around and a celebration toward the people can be carried out.

Fr. John Hunwicke, a formidable classicist, has proposed this translation:

The High Altar [not, be it observed, every altar] should be constructed away from the wall, so that the option is open [possit] of walking easily around it and using it for Mass facing the people. This [i.e., having the altar free-standing so that the options are open] is desirable wherever possible.

According to further research summarized at Corpus Christi Watershed, the official translation of GIRM 299 on which Bishop Christensen relies is defensible. However, as the same CCW article demonstrates with six arguments (and accompanying documentation), the Congregation for Divine Worship has repeatedly clarified that the ad orientem position is by no means ruled out and remains fully legitimate in the Ordinary Form. Moreover, there are other authoritative sources that suggest the normativity of ad orientem, which leads to a tension between different sources. This larger context points out the serious weakness of Bishop Christensen’s claim that the GIRM is “unambivalent” (he seems to have meant “unambiguous”) on the matter.

2. The bishop’s claim that “[i]t was clearly the mind of the Council that the priest should face the people” is totally unsustainable.

According to a most useful resource, Henri De Lubac’s Vatican Council Notebooks, vol. I, which provides summaries for almost every intervention on the liturgy in the Council’s first session, there were two Council Fathers who brought up the issue of versus populum in the aula: Luis Gonzaga da Cunha Marelin, Brazil, on October 31, 1962: “talk about the celebratio versus populum” (p. 227) and Wilhelm Josef Duschak, Philippines, on November 5, 1962: “Christ celebrated coram popula, alta voce, lingua vernacula” (p. 235).

I find two things interesting here. First, there were hundreds of speeches in the aula on Latin (it was by far the most controversial subject, to which De Lubac’s book bears witness) but, as far as I can tell, only these two mentions of versus populum. To get a sense of comparison, the question of whether to abolish the maniple arose more frequently than that.

Second, the Brazilian intervention says the topic should merely get a mention in the Constitution, not that it should be recommended or enforced, and Duschak’s viewpoint about the Last Supper, popular in his day, has been called into question, since the ancient customs of dining could not accurately be called versus populum (see my article “The Possibly Dubious Liturgical Legacy of Leonardo’s Last Supper”). The great scholar Joachim Jeremias in The Eucharistic Words of Jesus (pp. 196–97) notes that Our Lord could well have spoken the words of institution in liturgical Hebrew.

These two points in the bishop of Boise’s memo remind me of the similarly inaccurate statements of Pope Francis (who appointed him) in the Apostolic Letter Magnum Principium of 2017:

The great principle, established by the Second Vatican Ecumenical Council, according to which liturgical prayer be accommodated to the comprehension of the people so that it might be understood, required the weighty task of introducing the vernacular language into the liturgy and of preparing and approving the versions of the liturgical books, a charge that was entrusted to the Bishops. … [E]specially given the various clearly expressed views of the Council Fathers with regard to the use of the vernacular language in the liturgy, the Church was aware of the difficulties that might present themselves in this regard.

This paragraph is telling for its mixture of accurate and inaccurate phrases. For it was the same Council that emphasized the other great principle that “the use of the Latin language is to be preserved in the Latin rites” (SC 36.1), “steps should be taken so that the faithful may also be able to say or to sing together in Latin those parts of the Ordinary of the Mass which pertain to them” (SC 54), and “[i]n accordance with the centuries-old tradition of the Latin rite, the Latin language is to be retained by clerics in the divine office” (SC 101.1). The “clearly expressed views of the Council Fathers” included an avalanche in favor of retaining Latin either totally or for the fixed parts of services, as catalogued in my article “The Council Fathers in Support of Latin: Correcting a Narrative Bias.”

Once again, it is a matter of moral integrity that we make our cases based on what authoritative texts actually say, not on the “Spirit of Vatican II.”