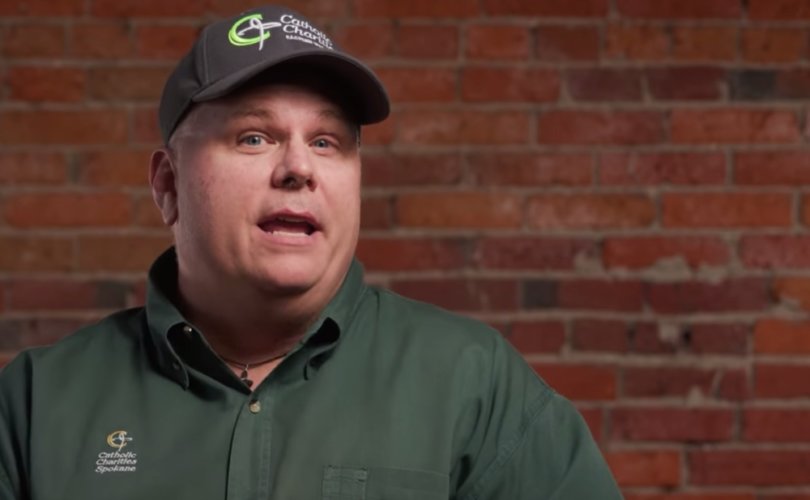 “Our Catholic faith tradition was built on the premise that a baby born in a Manger in the Middle East was a white baby. So how can we be surprised to know that we are a church that must still fight against racism even now,” McCann said in his June 19 youtube “Message to Staff and Clients.”

McCann goes several steps further, however, declaring that the “hard truth” is that every “white person living in America” is a racist.

“For me as a white person, saying I'm not a racist is like saying fish is not wet,” he went on to say. “My Catholic church and my Catholic Charities organization is racist. How could they not be?”

McCann went on to call the pro-abortion and pro-LGBT Black Lives Matter group a “Christ-like” movement.

“Catholic Charities supports Black Lives Matter. We simply cannot stand outside of something as significant as this movement, even though we know full well there may be a price to pay for walking into it, we must walk in any way now. In its purest nonviolent form, it is a Christ-like movement that honors the Church's teaching,” he said.

McCann said that his organization will now become aggressive in pursuing its goals that apparently align with the Black Lives Matter movement.

“Only through intentional aggressive assertive action can we truly be an organization that's anti-racist. We must embrace this action and hold ourselves accountable for it if we are to be truly authentic as a voice for human dignity.”

In the wake of the violent death of George Floyd and the subsequent violent Black Lives Matter protests that are tearing down “white” symbols all over the US, but also in many other “Western” countries across the world, his public “confession” did no less than justify the anger that has been stirred up over the last weeks among a vocal minority of non-Whites who uniformly protest against only one sort of racism, be it real or imaginary.

In a word, Western Whites representing Catholic and Christian civilization are by their very existence oppressors who have under-trodden, enslaved and marginalized natives and people of color all over the world. And even when they did (or still do) good, it was in a racist fashion.

This is how Rob McCann puts it: “Our own Catholic Charities organization that does so much good and fights for so much Justice still has also been unknowingly part of the institutionalization of racism. Here at Catholic Charities we have a staff, a leadership team and a board that is mostly white, even though those we serve are often disproportionately people of colour. We need to be better than that. We at Catholic charities even in our love for serving others are still at the same time part of the problem.”

It is a very revealing point of view, and in fact it truly exemplifies the true nature of the current “antiracist” agitation in so many parts of the world. It rests on the premise that you first must assess people according to their color of skin rather than according to their good or evil actions. It supposes that Blacks – or Afro-Americans as they must now be called – somehow need to be in equal proportions everywhere compared with Whites, and that Whites are by nature to be suspected of conscious or unconscious bias in whatever they do.

McCann said it this way:  “I am a racist. That’s the hard truth. I am a racist. How could I not be as a white person living in America where every institution is geared to advantage people who look like me? It’s seemingly impossible for me to be anything other than a racist. I know that I have routine bias, even if it is unconscious bias, as we all do. But I also believe that my bias is dangerously different. My bias, the bias of white people, supports and feeds into powerfully racist systems in our country.”

That’s the country that elected a colored President, Barack Obama, in 2008, and then re-elected him four years later. It would appear that that doesn’t count.

McCann’s statements are a perfect example of the true nature of anti-racism. It protects only given communities or minorities and accuses others, the “racists,” of being collectively to blame for certain ways of being or acting as a group, whatever the behavior of individuals belonging to the group. In fact, antiracism appears to be “racism in the opposite direction,” as Bernard Antony, co-founder of the revived Chartres pilgrimage in France and of the AGRIF, a legal defense alliance for the French and Christians in France against “racism,” calls it.

Seen from France, which has had “anti-racist” laws and propaganda since 1972 – hate-crime laws that include race, religion, nationality, ethnicity, sex, and now sexual orientation – McCann’s kind of talk is both false and dangerous. These laws have consistently been used by the powers that be against France and the French, Christians and Catholics, and against many kinds of national preference, frequently leading to preference for immigrants over and above the native French.

Many French Catholic thinkers in the 20th century, from Jean Madiran to Jules Monnerot who came from a mixed-race family in Martinique have theorized about this “so-called anti-racism,” that is in fact a mutating virus of communist dialectics in that it sets one part of society up against another. In this case: the oppressed ethnic “minorities,” whatever their size, against the “white Christian majority.”

Monnerot called racism a “mass-deception.” “There is no difference between racism and anti-racism. (…) Anti-racism is racism against racists. The hated group is constructed by the hated group, which selects real traits and even imaginary traits, traits that are the object of rites of execution and collective maledictions in the fashion of the supposedly civilized 20th century – especially maledictions by the media. These are technically the most perfect incitements to hatred known in the history of mankind,” he wrote in 1995, shortly before his death.

Jean Madiran showed that anti-racist ideology was being used not to identify and condemn true racism – which politically means “considering race as the unique or supreme principle of organisation” – but as a tool: “It has become a technique for legal, moral and political assassination.”

In France, “anti-racism” has served all immigrationist politics and allowed to blame protection of borders and any expression of approval for benefits that French colonists or missionaries may have brought to non-Christian countries – from hospitals, schools and roads to the Catholic faith.

In asking forgiveness for the supposed “racism” that is automatically his, due to his white skin, McCann shows in another way the communist affiliation of his thought. Self-criticism and self-accusation is part and parcel of Marxist-Leninist ideology. Oppressors of the people were expected to “confess” to their (imaginary) crimes in re-education camps, sometimes saving their lives in this way, sometimes not.

McCann also subscribed to the ideology of collective guilt, it was even the conclusion of his talk: “Please forgive us our trespasses and please embrace us. Please lock arms with us and walk with us on this path towards healing and towards a justice that loves,” he proclaimed.

Earlier in his message, he said:

“As a Catholic who believes in reconciliation, I must own my part in that and treat it like any other sin. I must know it, name it, speak it, ask forgiveness for it, while trying to eliminate it from my life.

“For me as a white person, saying I’m not a racist is like saying fish is not wet. In America, racism is no longer a question but rather it’s the toxic water in which we all swim. We are all treading water in this shortcoming, whether we want to know it or not.

“My Catholic Church and my Catholic Charities organisation is racist. How could they not be. Our Catholic faith tradition was built on the premise that a baby born in a Manger in the Middle East was a white baby. So how can we be surprised to know that we are a church that must still fight against racism even now?”

Is the Baby Jesus somehow “responsible” in McCann’s eyes for the supposed “racism” of the Church? Should He have been born black or yellow or brown?  Or is it just our vision of the Christ-Child and his most beautiful Mother, the Virgin Mary that is at fault? But depictions of Our Lady and the Nativity scene have always taken on local traits: there are black, Oriental and Indian representations of them, and they show that Christianity is universal. McCann’s accusations do not hold. But they are loaded guns for the anti-Christian movements so active in the world today.

What he did not realize is that anti-racism today is not about color of skin: in reality it is about calling all cultures equal, and negating the true meaning of civilization and universal values and good. Christian civilization and primitive culture, Islamic culture, animist culture and all the others are deemed to have equal value and absolutely equal rights. As an ideology, anti-racism has already led to the proclamation of cultural rights for all peoples in Europe by the European parliament; that means cultural rights for Islamic immigrants, for instance.

At the same time, this shows that anti-racism is an attack on all missionary efforts. When European missionaries went forth to far-flung, dangerous, hostile countries and populations in order to bring them to Christ, it was not because they considered them inferior, but because they wanted them to share in the true brotherhood of man under the fatherhood of God, and to obtain for them the means to reach eternal happiness together with them.

There have been racist regimes but they certainly were not Catholic, or if Catholics were racist they were not in accordance with their faith.

There were faults, sins and imperfections as in all human endeavors;  but was is now being reproached to these proclaimers of the faith is that they should have wanted to convert non-Christian populations in the first place. In a way, anti-racism is a form of indigenism, or leads to it.

It is conveniently half-blind, putting the blame of all “racism” on only one category of people. When McCann speaks of white bias, this is already biased. It supposes that all Whites are racists. But even those who are – and of course they exist, as racists exist in every human group – are not the only or necessarily the worst racists. There are Arabic or Islamic countries that have been selling black slaves for centuries untold and by the millions, and this still goes on.