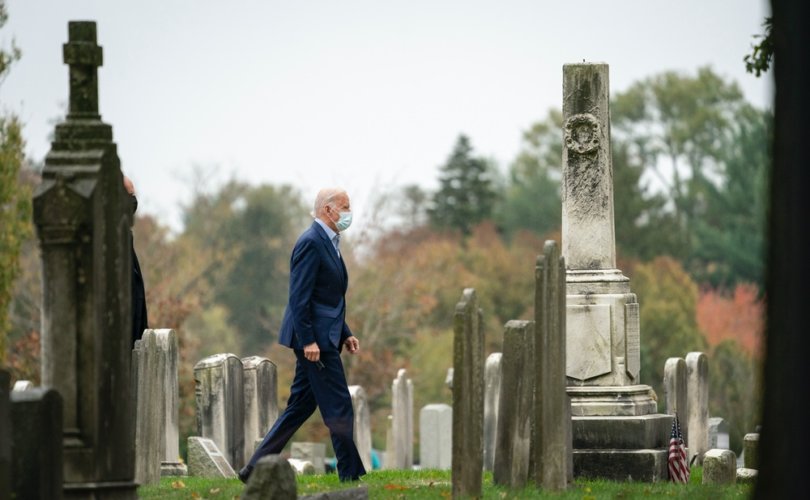 November 13, 2020 (LifeSiteNews) – The U.S. presidential election has been the center of worldwide attention in recent weeks. Pro-life people throughout the world are naturally deeply shaken by the prospect of a Joe Biden/Kamala Harris administration that supports the slaughter of innocents by abortion for all nine months of pregnancy.

In the meantime, in Westminster, the Mother of Parliaments, parliamentarians, including notable Catholics, voted to suppress public religious services including the suppression of the Holy Sacrifice of the Mass for the first time since the Catholic Relief Act.

It’s a dark moment in world history, made all the darker by the welcome given to the apparent result of the U.S. election by so many people who should know better – including our friends, family members, and fellow church-goers; and including the United States Conference of Catholic Bishops (USCCB) who said in a statement published on 7th November 2020:

“… We congratulate Mr. Biden and acknowledge that he joins the late President John F. Kennedy as the second United States president to profess the Catholic faith …”

Does the USCCB understand the lie they are telling? Do they know that to profess the Catholic faith means to believe and profess all that the holy Catholic Church believes, teaches, and proclaims to be revealed by God? Does the USCCB not understand that supporting abortion breaks the 5th Commandment? Is the USCCB unaware that Pius XI in his encyclical Casti Connubii rejected the specious justifications of abortion and that Pius XII excluded all direct abortion, i.e., every act tending directly to destroy human life in the womb “whether such destruction is intended as an end or only as a means to an end”[1]?

It’s entirely understandable if pro-lifers, Catholics, and all people of good will are feeling deeply disturbed by the celebration by fellow citizens and church leaders of the apparent ascent to the world’s most powerful political office of a man who, by reason of his unequivocal, unapologetic support for abortion alone, is totally unfitted for this role. It puts us in mind of, but it’s even worse than, the ugly scenes of young people celebrating in Dublin when, tragically, 66.4% of those voting in Ireland’s 2018 abortion referendum supported the thirty-sixth Amendment of the Constitution of Ireland permitting the Irish Parliament to legislate for the killing of unborn children.

True bishops know that the USCCB statement is false and an historic scandal – whereas, with the young people in Ireland, the words of Our Lord on the Cross come to mind: “Father, forgive them, for they know not what they do.”

This brings me to my main point. I hope and pray that, as a result of a just legal process, Trump proves to be the true winner in this month’s U.S. presidential election. However, the disaster of a Biden/Harris presidency for the world will be a mere tea-party in comparison with the eclipse of the Catholic Church, taking place today – as evidenced by the disgraceful and dishonest statement from the USCCB regarding Joe Biden and his running mate for the U.S. presidency.

Whoever wins the presidency, whichever politicians triumph in the U.S. Senate or Congress, we cannot expect them to lead the American public back to God and to full respect for human life, true marriage, and the family, if Catholic leaders fail to proclaim the truths taught by Christ and handed on by the Apostles and their faithful successors for the past 2,000 years.

Albeit, as the Society for the Protection of Unborn Children’s chief executive, I lead a non-confessional group, I have never hidden my Catholic faith during my 45 years working for the Society. There is no reason why any pro-lifer should do so. I consider that the Catholic Church was founded by God Himself, Jesus Christ, the Second Person of the Holy Trinity, in order to defeat Satan and to lead all people to Heaven.

However, whatever the beliefs of pro-lifers may be, it’s clear that one comprehensive, consistent body of teaching on marriage, the family, human sexuality, and the sanctity of human life is found in the constant, unchangeable, teaching of the Catholic Church – but that, tragically, that teaching is now eclipsed by, above all, false teaching from so many of those who hold the office of bishop in the Church.

There is so much evidence of false teaching on the part of those who hold the office of Catholic bishops, including from the Bishop of Rome with his recently reported statement on civil unions for same-sex couples, it’s hard to know where to begin – but, for me, here in Britain, nothing’s worse than the Catholic Bishops’ Conference of England and Wales and their repeated expressions of support for the British government’s legislation which makes “relationships education” compulsory at primary school and Relationships and Sex Education compulsory at Secondary School.

Not only have the bishops welcomed LGBT-inclusive Relationships and Sex Education in schools in England, they have said, on the subject of homosexuality, that an “exalted form of love exists just as powerfully in relationships between people of the same sex as it does in heterosexual relationships”; and they have welcomed as “compatible with the Catholic model curriculum” the government’s Final draft guidance on relationships education, relationships and sex education and health education (February 2019) which reaffirms in an intimidatory way the obligation of schools to teach LGBT content; and in which abortion is presented as one of the available options during pregnancy to which pupils must be signposted without any reference to parents.

With due reverence to my pastors, I affirm that the words of Our Lord apply to the members of the Catholic Bishops’ Conference of England and Wales: “And he said to his disciples: It is impossible scandals should not come. But woe to him through whom they come! It were better for him that a millstone were hanged about his neck and cast into the sea, than that he should scandalize one of these little ones”.

The scandal of the U.S. bishops’ statement on Biden, the scandal of the CBCEW, and all the scandalous statements of so many bishops throughout the world, including the Bishop of Rome, which are currently eclipsing the glorious teaching of the Church on life and the family must not cause faithful Catholics and tireless pro-life campaigners to despair. On the contrary. As Professor de Mattei, the church historian, has said, there has never been a better time for the lay faithful to preach the Gospel, the whole of the Gospel, from the rooftops – encouraged by the rare exceptional bishops who, as faithful successors of the apostles, sacrifice the respect of their peers by courageously handing on the teaching of Christ.

In an entirely different and secular context, the English poet John Milton wrote: “The hungry sheep look up and are not fed”. The hungry sheep are all around us. At this time when so many are disturbed by the U.S. presidential election and its possible consequences for life and for the family, as well as by historically unprecedented draconian restrictions of freedom imposed in apparently every country throughout the world, now is the time for the pro-life movement to come out fighting and proclaiming the pro-life message in its fullness, namely that:

Now is the time for Catholics and pro-life people of all faiths and none to break their misplaced tactical silence on the fatal damage being done to marriage, to the family and to the protection of human life before birth by legal recognition of same-sex unions; and to turn their backs on compromise unethical political deals on abortion which sacrifice babies in cases of rape, or disability, or before the baby’s heart begins to beat, and to begin fearlessly to proclaim the whole truth about the sanctity of human life, marriage, and the family.