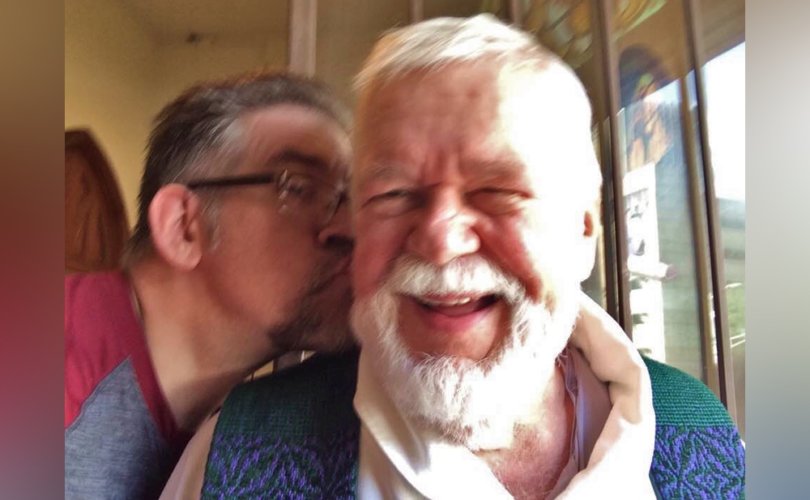 ATLANTA, October 15, 2018, (LifeSiteNews) – A high-profile archdiocesan priest who is also appointed by his archbishop as spiritual director for victims of sexual abuse by clergy apparently entertains his friends at drag shows and with homosexual-oriented videos.

Pro-LGBT Monsignor Henry Gracz is pastor of the Shrine of the Immaculate Conception in Atlanta, which has long held the reputation within the archdiocese as being a “gay parish.” As Pastor, Gracz oversees ongoing LGBT-affirming initiatives by the parish.

More than that, his social media postings reveal that he is not only very much at home operating within Atlanta’s gay subculture, Gracz actively promotes it.

Gracz’s parish maintains a “Pride Outreach,” including running a booth at Atlanta’s gay pride week each year, and sponsors GLBT couples potluck socials, which are “for GLBT couples who are in committed relationships for couple support by providing a venue for socializing with other GLBT couples,” according to the parish website.

Later this month, he will also host Fr. James Martin, SJ — the apostle of the normalization of homosexuality within the Catholic Church — who will repeat the pro-LGBT talk he recently delivered at the World Meeting of Families in Dublin.

But there is also this troubling dimension to Msgr. Gracz’s ministry which not only loves the sinner, but which also seems to be AOK with the sin, although it is not entirely clear that he views active homosexuality as sin.

In an August 1 Facebook posting, Msgr. Gracz announced he was celebrating with friends at “Lips,” a popular Atlanta drag bar. Although his Facebook account is no longer visible to the public, alert LifeSiteNews readers provided screenshots.

The “Ultimate in Drag Dining” bar features shows such as “Taboo: The Forbidden Show.” This show is described on Lips' website as “dirty and nasty.”

“Hosted by our Mistress of Seduction, Edie Cheezburger!  The Taboo Show is our dirty late-night show. 21 +… if you can't handle dirty and nasty… STAY HOME!” the website states.

Gracz can be seen sitting at the drag bar in one photo taken by friends at the August 1 event.

He has also postings a link to a video titled, “Weird Questions Gay Couples Get.”

The video shows a young homosexual male couple being asked questions such as, “Are you going to have gaybies?” and “Who is the ‘twink’ and who is the ‘leather daddy?’”

A young woman whom they’ve just met excitedly asks them, “Can I be your surrogate? Our babies would look so …”

While the video is comedic in nature, it makes light of the homosexual lifestyle and trivializes the humanity of infants yet to be conceived and born.  They aren’t “babies,” they are “gaybies.”  And these children will not be the product of a loving union between mother and father, husband and wife; they will be the product of gamete donation, gestated by a female stranger who is not loved or respected as the child’s mom.

Yet Msgr. Gracz — who has a ministry to the same-sex attracted and also serves as a sexual abuse advisor — finds this amusing and suitable to share with the entire world.

All this begs the question, “Is this the man you want counseling your teenage son who has been sexually abused by a priest?”

The Catholic mother of a survivor of abuse within the Atlanta archdiocese was so troubled upon learning of Msgr. Gracz’s counseling role that she penned a letter to Archbishop Wilton Gregory to let him know the heartbreak he caused her and the “disgust” she feels by appointing a homosexual-affirming priest as “spiritual guide” for victims of sexual abuse in the archdiocese.

LifeSiteNews was made aware of a letter written by Lauren Whittaker, the mother of an abuse victim, to Atlanta's archbishop. In the August 22 letter, Whittaker let Gregory know that, as the mother of a clergy-abuse victim, she was filled with “disgust” at his appointment of Gracz.

“A Spiritual Director is meant to be someone who follows Church teachings and leads you to a deeper relationship with Christ,” stated Whittaker. “How could this man, who is widely known to encourage the homosexual lifestyle, possibly be able to counsel victims of homosexual abuse?” she wrote in her letter.

The experience of her son being molested at the hands of a representative of the Church decades ago, who at the time was passed off in her parish as a seminarian, and subsequent grueling trial, was the most devastating thing she’s ever had to go through, she said. The abuser eventually pleaded guilty and served a few years in prison, later dying.

What the family did not expect, but has come to find is often the “norm,” is a culture in the Church — whether with its leaders or other laity — of individuals who will discredit the victims and their families in order to protect themselves.

LifeSiteNews reached out to the Archdiocese of Atlanta for comment but received no reply by press time.