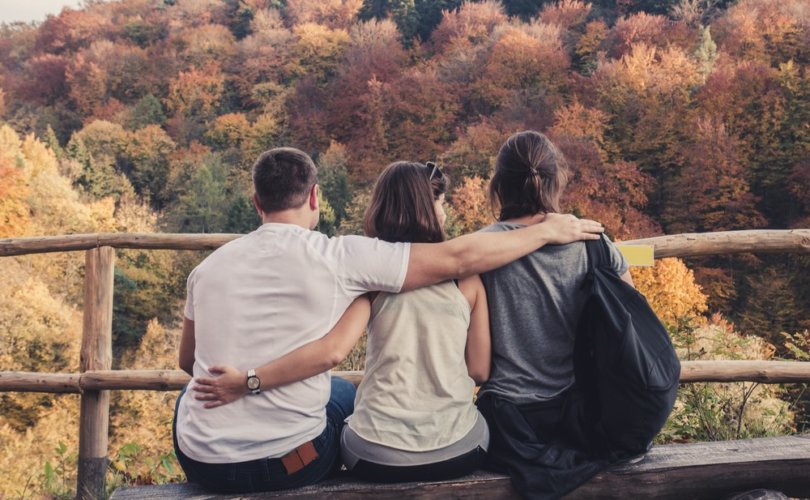 February 17, 2020 (LifeSiteNews) – A few years ago, the best way to trigger an advocate for redefining marriage to include same-sex couples would be to note that once the gender of those involved in the marriage became arbitrary, there really was no reason, strictly speaking, that the number of partners involved should be limited, either. This logical argument—that once you redefine one characteristic of an institution, there is no reason you can’t redefine others, too—was extremely inconvenient for the activists who recognized that they needed to move the Overton Window slowly enough that nobody would get too alarmed. It is always important not to boil the frog too fast.

And so those who noted that polygamy could be coming down the pipe as other unorthodox romantic arrangements demanded government recognition (and the accompanying benefits) were met with outrage and accusations of being smear merchants, bigots, or promiscuous employers of the slippery slope fallacy. It was ludicrous to claim that those who wished to redefine an institution that was thousands of years old would not stop with one radical change, they said, and anyone who said otherwise was simply a raging homophobe.

Those were the good old days. Since then, major newspapers and other media outlets have persistently produced glowing stories on all sorts of sexual arrangements, with headlines asking (speculatively, of course) whether or not “polyamory” might just be the next big thing. Never mind that there wasn’t going to be a big next thing—once the sexual revolutionaries achieve one objective, they move seamlessly on to the next one, totally ignoring their previous outrage at being accused of the very thing they are now doing. Outrage is a convenient tactic. Sincerity is not.

Anyways, that brings us to Utah, where the issue of polygamy is again front and center. According to the Salt Lake City Tribune, a state-level bill that would decriminalize the practice among consenting adults has now been sent to the chamber for a vote after receiving unanimous endorsement from the state Senate committee. The Utah Senate Judiciary, Law Enforcement, and Criminal Justice Committee put the bill forward after testimony that rather ludicrously that laws prohibiting polygamy “labels law-abiding citizens as criminals.”

Current laws on the books state that polygamy is “a felony punishable by up to five years in prison, with an additional 15 years possible if the defendant is also convicted of fraud, child abuse, sexual abuse, domestic abuse or human smuggling or trafficking.” The proposed decriminalization would reduce the practice to a mere infraction, which not only carries no jailtime but actually makes polygamy between consenting adults a lesser infraction than many traffic offenses, with fines reaching only $750 with potential court-mandated community service for perpetrators with other charges.

Of course, the justification for the law is the typically brazen appeal to compassion, with the polygamy legislation’s sponsor, Republican Senator Deidre Henderson, stating that the current laws prevent victims of abuse (sexual or otherwise) in polygamist families fearful to come forward because they could be arrested (which is, again, an extraordinarily weak and transparent argument).

According to Henderson: “The people that I have spoken with long to feel part of society. They are tired of being treated like second-class citizens. They feel like Utah has legalized prejudice against them. They want to be honest people, but feel like they have to lie or teach their children to lie about their families in order to stay safe.” Now, do those talking points sound familiar, or what? Where have we heard that before?

Those opposing the decriminalization of polygamy, of course, are attempting to point out that this law will drastically normalize the practice and encourage people to pursue it, and pointed to the same abuses being used to justify Henderson’s law as a reason that this lifestyle should not be destigmatized. The argument needs to be made, but the last debate over redefining marriage has effectively cut opponents off at the knees. Marriage, after all, has been reduced to a malleable contractual arrangement that the Courts can change at will. Who is to say that some dude and his harem can’t be recognized by the government, too?

So far, at least, the Supreme Court has ducked the argument. In 2017, they declined to hear an appeal from the stars of the TLC show “Sister Wives,” polygamist Kody Brown and his four wives. He is married to one of the wives, but of course feels deeply stigmatized that he does not have formal state recognition of his other sexual relationships, and thus had challenged the current Utah law now under assault by Deidre Henderson. It is difficult to see how a reality show star is being persecuted, of course—most polygamist couples live openly however they wish. What they are pushing for now is to have their arrangements receive the legitimacy of state endorsement.

We’ll see how this plays out. But in the wake of Obergefell, it may well be that what’s good for the goose is good for the gander—and his entire flock.