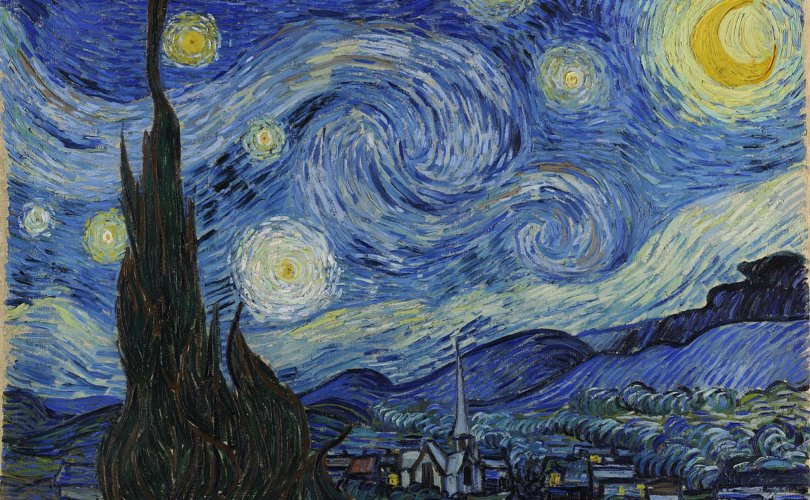 July 24, 2018 (LifeSiteNews) – Of the many famous paintings of Vincent van Gogh (1853–1890), one of the best-known is The Starry Night of 1889. It is a dramatic piece, full of life and energy, and pulsing with a strange universal movement, as if all the plants, mountains, and even buildings were ready to leap up into the dance of the stars and moon in the heavens. What is it about?

Van Gogh’s religious and metaphysical views were complex, fluid, and sometimes contradictory. He grew up in a devout Protestant household. His father was a minister, and Vincent intended to follow the same path, but failed a necessary exam, and became for a short while a missionary among the poor in Belgium. Later he wandered far from organized religion, but never abandoned his self-sacrificial love for the poor or his conviction about a supreme divine reality that stands behind the veil of this material world. In his extensive correspondence with his brother (over 600 of Vincent’s letters to Theo are preserved), the subject of God comes up frequently.

He then shares with Theo his opinion that

the best way to know God is to love many things. … But one must love with a lofty and serious intimate sympathy, with strength, with intelligence. … That leads to God, that leads to unwavering faith. … To give you an example: someone loves Rembrandt, but seriously—that man will know that there is a God, he will surely believe it. … To try to understand the real significance of what the great artists, the serious masters, tell us in their masterpieces, that leads to God.

The mention here of Rembrandt should not surprise us. As I mentioned in another post, Rembrandt’s painting The Jewish Bride was one of Van Gogh’s favorites, and he surely followed his own advice of trying to “understand the significance of what the great artists, the serious masters, tell us in their masterpieces.”

So, what might Van Gogh himself be telling us in his masterpiece, The Starry Night?

Like El Greco, Van Gogh is showing us something about the inner natures of things—that they are not static entities, lumps of matter as modern materialists would have it, but emanations from the creativity of God that exist by His active choice and are moved, in their various ways, to Him as their end. To use the words of the ancient philosopher Proclus, things exist in a state of “upward tension” towards the Good. If we could peer into the essence of a stone, a plant, an animal, a star, as we can peer into our own souls, we would find there the signature of their divine artist and a dynamism to exist to their fullest in imitation of Him. This is why all the objects in the painting are swaying, as if to unheard music.

The cypress echoes the church tower: both are pointing straight upwards to God. The tree is a church spire born of nature, and in shape it is like a flame. The church spire is also an organic shape, like a tree, ready to grow taller if it could. Both nature and culture, creation and religion, beckon us to worship and to be lifted up on high.

The world is brimming with mystery, but it is not terrifying or hostile; all the little homes in the village are nestled warmly together, as if in the bosom of the trees and hills, and the little dots of light shining through their windows suggest the welcome of hospitality.

We know from his letters that Van Gogh was steeped in Scripture. With his eleven stars and the moon, could he be alluding to the dream of the patriarch Joseph, who saw the sun, the moon, and eleven stars bow down before him (Gen 37:9)? Here, of course, there is no sun; perhaps the sun is the hidden God whom no eye can see. Or the painting might remind us obliquely of the great vision in Revelation, of the woman crying in the travail of birth, in pain to be delivered—girded with the sun, standing upon the moon, crowned with stars (Rev 12:1–2). For there is no question that this work has an apocalyptic feel to it, as of a world in anguish to be fulfilled: “we know that every creature groaneth and travaileth in pain, even till now” (Rom 8:22).

That Van Gogh had some such thoughts in mind, along with a welter of others, is indicated by the fact that he named this painting after a passage he had read in Victor Hugo’s Les Miserables:

He was there alone with himself, collected, tranquil, adoring, comparing the serenity of his own heart with the serenity of the skies, moved in the darkness by the visible splendours of the constellations, and the invisible splendour of God, opening his soul to the thoughts that fall from the Unknown—in such moments offering up his heart at the hour when the flowers of night inhale their perfume, lighted like a lamp in the centre of the starry night.