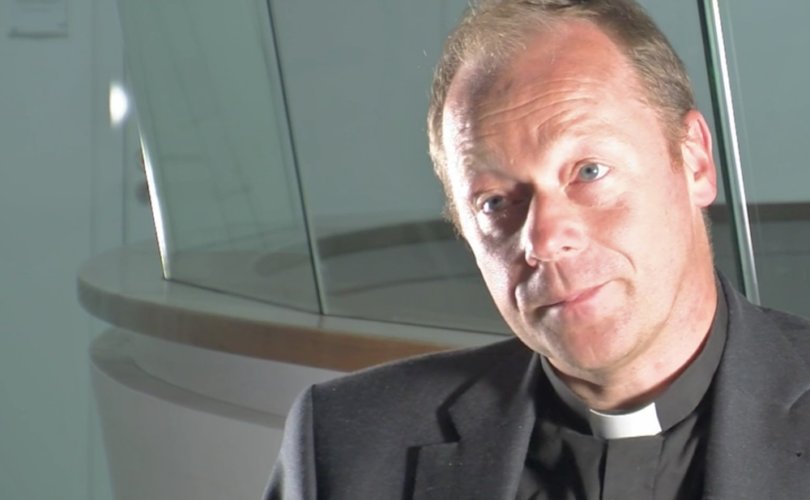 November 28, 2018 (LifeSiteNews) – Father Ansgar Wucherpfennig, S.J. has recently been re-instated by the Vatican as the rector of the Jesuit graduate school in Frankfurt, Germany, in spite of his statements in favor of blessings for homosexual partners and female ordination.

As he now says in a new interview: “I did not recant anything.” Wucherpfennig also adds that it was Jesuit Superior General Father Arturo Sosa who handled his case and now even asks him to publish essays on these two controversial topics.

LifeSiteNews has reported that the Vatican – after an initial demurral to give a Nihil obstat (“nothing stands in the way”) to his re-election as the rector of the Jesuit school – has now accepted Wucherpfennig's simple statement that, while teaching Catholic doctrine, he will always present the statements of the Magisterium, but at the same time he will continue to question certain aspects of it.

Now, in a new interview, Father Wucherpfennig responds to this recent Vatican decision and makes it clear that he has not withdrawn any of his controversial statements in favor of the blessing of homosexual couples, as well as female ordination.

The priest explains that he only dealt, through his own German superior, with Father Arturo Sosa, the head of the Jesuits, and not with the Vatican. He adds that it was Sosa who gave him the mission to write about these controversial topics: “The General Superior, Father Sosa, however, has given me the task to make further research about these two topics [homosexuality and female ordination] and to further develop, with a creative loyalty, the Church's views.”

Wucherpfennig makes it clear that he told Father Sosa that he “as a Christian and academic” has the “hope that the teaching with regard to these two points will change and will widen.”

He also shows himself content with the current resolution of the conflict, saying that all of the involved parties “were able to save face.” “Both sides made conciliatory steps.”

When asked whether he already has plans about his future essays on these topics, Father Wucherpfennig responds, saying: “This is still too early. I anyway wanted to continue to work on these topics.” In light of the recent German clerical sex abuse study, he adds, “one has to discuss things openly, without taboos.” It is now time for such research, the priest explains. He has already received several requests concerning the question of how to interpret the Bible  – especially the letters of St. Paul – concerning the topic of homosexuality.

Concerning female ordination, Wucherpfennig points out that “Pope Francis himself has already touched upon the matter of a 'female diaconate.'” In the German priest's eyes, the New Testament “allows for a larger variety of tasks and a greater range of kerygmatic and pastoral tasks for men and women” than what is currently believed. “Whether I will then write an article or whether there will be a book, I do not yet know,” he concludes.

Father Wucherpfennig says that there are still some resistances in parts of the Vatican, but then specifically praises Pope Francis and says that, under his pontificate, “there was a new opening up of the Church's debates.” He thus welcomes the decision in his own case, saying that it reflects the direction wanted by the Pope: this Vatican decision “goes into the direction that the Pope obviously prefers: that the Church moves forward.”

Pointing to other cases that are still pending in the Vatican with regard to other theologians possibly to be censored for their heterodox positions, Wucherpfennig explains that, in his case, it was not about suspending his teaching license, but, rather, only about his being the rector of the Jesuit St. Georgen Graduate School in Frankfurt. Commenting on the outcome after the tense recent weeks, Wucherpfennig says: “All is well that ends well.”

Katholisch.de – the news website of the German bishops – published a commentary on the Wucherpfennig dispute, in which the author, Pia Dyckmans, comes to a similar conclusion. For her, the positive outcome of the dispute shows that “the atmosphere in the Church seems to me to be changing very slowly, after all.” She welcomes the new “culture of debate” which permits the exploration of topics such as “homosexuality, celibacy, and the role of the woman.” She supportively refers to the German Bishop Franz-Josef Overbeck of Essen who only this week has claimed that “the Church's sexual morality has to change!”

For Dyckmans, the Wucherpfennig case has become now a “Point of no Return.”

It is in this light that it is worthwhile to mention Father Wucherpfennig's own proposal to drop an oath for priests which had been introduced under John Paul II and which bound the priests not only to the extraordinary Magisterium, but also to the “so-called ordinary Magisterium, that is to say all writings, encyclicals, instructions of the Congregations.” “If the Vatican were to rescind it [that oath], I would speak about the change of culture,” Wucherpfennig explains in his new interview.

Cardinal Gerhard Müller, the former Prefect of the Congregation for the Doctrine of the Faith, recently commented in a LifeSiteNews interview concerning the Wucherpfennig dispute. He says about Father Wucherpfennig's own controversial positions concerning homosexuality and female ordination and his being permitted to remain the rector: “This is an example of how the authority of the Roman Church undermines itself and how the clear expert knowledge of the Congregation for the Faith is being pushed aside.”

“If this priest calls the blessing of homosexual relationships the result of a further development of doctrine, for which he continues to work, it is nothing but the presence of atheism in Christianity. He does not theoretically deny the existence of God, but, rather, he denies Him as the source of morality by presenting that which is before God a sin as a blessing,” he said.

Cardinal Müller adds: the fact that “the recipient of the Sacrament of Holy Orders has to be of the male sex is not the result of cultural circumstances or of positive, but changeable, Church legislation, but, rather, it is founded in the nature of this Sacrament and its divine institution.”