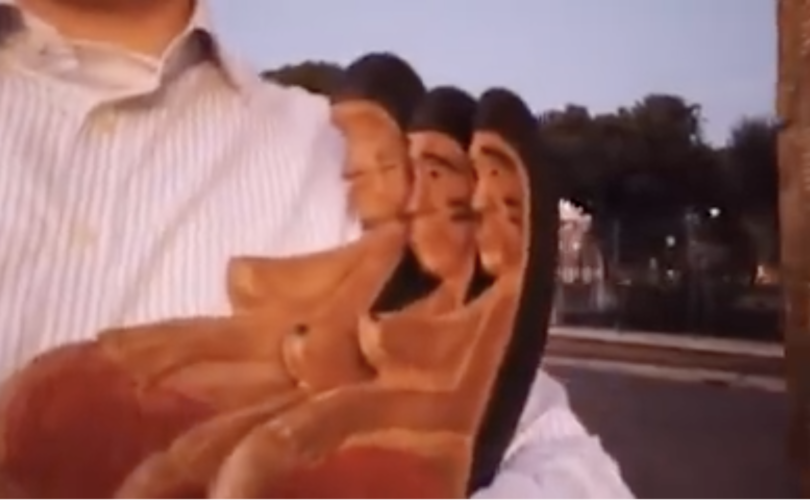 ‘Pachamamas’ headed for a plunge into the Tiber River

SIGN PETITION: Call on Vatican to remove all “pagan” symbols from St. Peter's and the Synod Hall! Sign the petition here.

I was probably at Mass when it happened, so I can’t take credit or blame for Pachamama’s mystical marriage with the Tiber river this morning. Indeed, I did not learn of the event until 11:33 AM Rome time, but it certainly added merriment to what was already a sunny, cheerful day.

Social media is still aflame with commentary on the dawn raid to free Santa Maria in Traspontina from the presence of the naked fertility symbols. Pachamama is often depicted as a serpent or dragon, and so it is appropriate that the figurines were thrown from the Ponte Sant’Angelo, the Bridge of the Holy Angel, the Holy Angel being St. Michael. You can see him, sword raised, on the top of the Castel Sant’Angelo in the video that was taken of the event. Justice must not only be done but seen to be done, as we say in the UK.

Some people are condemning the extraction of the carvings from the church as theft, and I understand this point of view. As a college student I threw several copies of a newspaper with an irreverent image of the Blessed Virgin Mary on its front page in a bin. I told an older relative, a devout Catholic, about this and, to my surprise, received a lecture about stealing and freedom of speech.

I have never had a sufficient counter-argument until now, and it is that the First Commandment about only serving the Lord our God and not having other gods takes precedence over the Seventh against stealing. Another is that, as I am sure the Synod participants would agree, the right to property is not absolute.

It is unclear to me that the Catholic men who threw Pachamama were Italians, but suffice it to say that they seem to be Roman Catholics, Catholics who wrote their statement in European, not American, English. Many European Catholics have strong views about female nudity in their churches. If they believe you are depicting the Virgin Mary naked, they get upset. If they believe you are foisting worship of a naked fertility goddess upon them, they get upset. The biggest surprise about the liberation of Santa Maria in Traspontina is that it took so long. The image wouldn’t have lasted five minutes in Poland.

I worked all morning―between giggles at the social media celebrations―and rushed off to the Sala Stampa without any lunch. My mood was ebullient, and I greeted the handsome young Italian men who daily hand me my translation device with tremendous smiles. I also greeted Dr. Jules Gomes of St. Michael’s Media, who expressed appreciation for this Synod Diary. Nobody else, apparently, is publishing an English one.

Today’s line-up at the press conference included Marcivana Rodrigues Paiva, an indigenous leader from Brazil; Fr. Dario Bossi, M.C.C.J., the Superior General of the Comboniani Missionaries in Brazil; Bishop Domenico Pompili, the ordinary of the diocese of Rieti in Lazio, Italy; and a very massimo formaggio, His Eminence Christoph Schönborn O.P., otherwise known as the Cardinal Archbishop of Vienna.

Ms. Paiva had intricate stripes painted on her face. She stated that her name was Marcivana and that she was an indigenous leader. She underscored that many women are leaders among her people. She expressed gratitude at being part of the Synod and talked about indigenous migration to the city of Manaus, the capital city of the state of Amazonas in Brazil. Today 45 different indigenous peoples now live there, numbering 35,000 and speaking 16 languages. She stated that these people are treated as if they are invisible and thus do not have rights.

Bishop Pompili spoke so earnestly about the earthquake devastation of 2016 that I was not surprised to discover that poor Amatrice is in his Lazio diocese. He called for the rebuilding of the damaged or destroyed Central Italian villages to actually take place and for it to be done on eco-conscious lines. Pompili expressed concern for the tens of thousands of Italian villagers who are still in exile from their old homes. He also identified the urbanization of Italy at the expense of small communities as a broader issue.

Fr. Bossi spoke convincingly about the negative impact of mining in Brazil, as you can read in my first story about the day’s briefing.

Cardinal Schönborn spoke about the permanent diaconate, how it was “opened up” by Vatican II, and how there are now 180 permanent deacons in the Archdiocese of Vienna. He said that he was at the Synod to listen, and asked the gathering to consider how we are contributing to the destruction of the Amazon. He pointed out that his own cell phone had material from rainforests. Schönborn cited paying attention to the poorest and the forgotten as Pope Francis’ special focus.

Needless to say, a large proportion of the media questions were directed to Cardinal Schönborn, who declined to make headlines by, for example, answering a question about the Brazilian government. He did not feel competent to discuss it, he said, adding “I am just a poor Archbishop of Vienna.” The cardinal also deftly avoided criticizing Pope Francis’ critics, giving me my second Synod story.

A media representative of the Episcopal Conference of Ecuador asked Marcivana about the challenges faced by the indigenous people in cities. She talked about their invisibility, lack of rights, and loss of identity from having left their lands. She indicated that the indigenous people who come to the cities are greatly helped by pastoral ministry.

The real concerns of the indigenous people were once again eclipsed, however, by a threat to universal Catholic traditions, this time our gold communion vessels and even our wedding rings. Fr. Bossi’s excellent presentation about irresponsible mining sparked Fr. Reese’s suggestion that the Church should ban gold in its liturgy and sacraments.

Admittedly that made a great headline for me, but I do not understand how it helps the indigenous people or the environment to give Catholics the impression―yet again―that our own beloved traditions are under threat: The male priesthood; the celibate priesthood; the use of precious metal to underscore the sacred nature of the Eucharist; the exclusive worship of the Blessed Trinity.

Then there was a searching question for Schönborn and the lack of vocations in the Amazon. The cardinal admitted that priests from Colombia, for example, go abroad to serve in Canada, the USA, and Spain. He believes that Europe has an abundance of clergy―a highly debatable statement, by the way―and that this is because priests in Europe are much better paid there than elsewhere.

The Cardinal followed up this cynical statement with an expression of gratitude for the help. He also introduced the concept of “vocational solidarity” and said that, just as all Latin America is responsible for the Amazon, so Latin America should send more priests to it. Schönborn also said that we must “self-criticize,” pondering why we are not inspiring vocations among the indigenous people.

And then the question I’d been waiting for―a request for a Vatican statement on the journey of Pachamama out of Santa Maria in Traspontina and down the Tiber. There was a slight sensation in the press room, for not everyone had yet heard about the dawn raid. The Vatican statement was it was too much to ask for one, as the team had just found out about it from social media. Paolo Ruffini, the prefect for the dicastery for Communications, called it an act of bravado, “a stunt” and a gesture that goes against the “spirit of dialogue”.

It is clear that the Vatican Communications/Information/Press people are still flummoxed that anyone cares that much about the wooden figures. This flummoxes me. Catholics are a visual people. We were reading the Gospel and our history in paintings and statues for centuries before we all became literate. As a preliterate child, I looked at woodcuts forming the Way of the Cross so often they are seared into my memory. So are the pretty pictures from Fr. Daniel Lord’s “Heroines of God: Saints for Girls.”

Of course we are horrified when Catholics―including male and female religious, by the way―bow down before graven images of unidentified, yet identical, images we are later told represent “Mother Earth”, “fertility”, “women.” How can the Vatican not understand this aspect of Catholic piety?

There was a last question allowed, presumably so we didn’t end with Pachamama, and someone asked Marcivana about her people’s spirituality. She said it was focused on the earth. They have been “taking care of” the earth for future generations for thousands of years (how?) and respect “Mother Earth” so that they can survive. I was completely dependent on the translator, but I am reasonably sure the indigenous leader didn’t include a testimony about the saving power of Our Lord Jesus Christ.

I went back to my apartment to write all afternoon, enter the social media ‘splashamama’ fray, and inculturate my stomach with a quattro formaggi pizza from the restaurant around the corner. As I sat waiting, I enjoyed listening to the multicultural staff rush around yelling at each other in Italian. I spoke Italian, too, which may or may not be why they gave me a supplì (fried rice ball with a melted cheese middle) for free.

A final word: the dawn raiders and those who rejoice that Pachamama has been sent down the Tiber are being accused by British and American commentators of racist motives. I hope the indigenous people aren’t being told this because it is simply not the truth. In the chapel so recently liberated from the dodgy figures is a banner showing Our Lady of Guadalupe. This is an icon of Mary indigenous to Mexico, containing traditional elements that indicate “sacredness” to Mexico’s indigenous people. This icon remains untouched.