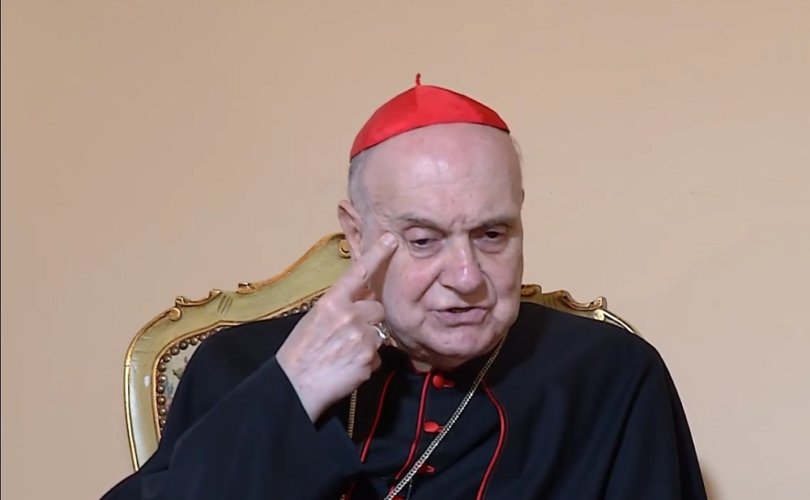 May 29, 2020 (LifeSiteNews) — Cardinal Angelo Comastri, the pope’s vicar for Vatican City, stated on May 28 that we need to recover the “courage” of Saint Francis of Assisi, who, in 1219, went to the Sultan of Egypt inviting him to believe in Jesus.” We should all have that courage and become missionaries, even unto death, the elderly cardinal added.

Today, the last day of his daily Angelus and rosary for the end of the corona crisis, Comastri consecrated “our life, our family, our Italy and the whole world” to the Immaculate Heart of Mary.

Cardinal Comastri has been a beautiful encouragement and witness to the Faith during these months of trial. Since March 11, when Italy went into lockdown, he prayed at St. Peter’s daily the Angelus and the rosary, together with a few faithful (with a short interruption during Holy Week). His daily prayers at noon were followed by hundreds of thousands of people around the world via live stream. LifeSite earlier reported how on April 3, Cardinal Comastri, when invoking the help of Our Lady, started to cry, thus expressing the anguish of the Italians over the loss of the many lives of their loved ones.

Father Ugochukwu Ugwoke, Isch., a Schoenstatt Father, commented on Twitter on this daily prayer event with Cardinal Comastri with these words: “Cardinal Comastri’s daily midday rosary for the past two months has been a pillar of strength for many including me, in this hard time. May our prayers rise like incense to the throne of God.” Later he added: “He’s truly a man of faith and his attitude on the course of this prayer is a great lesson to us on how best to pray.”

During yesterday's noon prayers, Cardinal Comastri remembered the situation of the third glorious mystery of the rosary concerning the Coming of the Holy Ghost at Pentecost. “This third mystery takes us to the Cenacle, to the Apostles, united and in expectation, and to Mary,” he explained. They are praying for the gifts of the Holy Ghost as promised by Jesus Christ. “And when the Holy Ghost enters our hearts,” Comastri continued, “he fills us with fire. He fills us with love to go out and become courageous missionaries even to the point of shedding blood out of love for Jesus.”

After describing how the apostles “spread the Gospels” throughout the world, the Italian cardinal insisted that “Pentecost continues to go on.” He then went on to speak about the year 1219, when Saint Francis of Assisi went to the sultan of Egypt “to proclaim Jesus Christ to him, inviting him to believe in Jesus.” Even though the “sultan did not convert,” the cardinal explained, “he remained in deep thought.”

Giving us Saint Francis as an example, Comastri says: “this is what the life of Saint Francis tells us: the courage of the saints.” “We need to recover this courage in us today,” he concluded.

These words that call upon us Catholics to be active missionaries who carry Our Lord’s words into the world and help to convert people to the Catholic Faith. They are a true inspiration.

They stand — most probably unintentionally — in contrast to what Pope Francis says and does. Not only did he sign the February 4, 2019 Abu Dhabi Statement, which insists that “the diversity of religions” is “willed by God,” but he also insists that one should not even actively try to convince others of the Catholic faith. Instead, says this pope, one should lead a good Catholic life, thus indirectly (but not explicitly) inviting others to join the Catholic Church. On April 25, for example, Zenit reported the following regarding his words at Mass at Santa Marta:

A university student in Poland had asked the Pope what he could do to convince many of his atheist friends. The Pope said, “The last thing you need to do is say something.” “Start living, and, seeing your testimony, they will ask you: ‘Why do you live like this?’” Faith, the Holy Father explained, must be transmitted, not to convince but to offer as a treasure.

In the same homily, after saying the Faith has to be missionary — that is to say, not selfish — the pope once more spoke negatively about proselytism (an aggressive form of converting others), yet applied this term to the mere act of “convincing others of the faith, to convert,” which he rejected. “How many times in the Church, in history, movements, groups, of men or women were born that wanted to convince others of the faith, to convert[.] … True ‘proselytists.’ And how did they end up? In corruption,” the pope stated. We Christians are to transmit the Faith by “service” and by our way of life, “not by convincing” others (see here, around minute 18). Pope Francis pointed out that “humility” is important in this context.

“Faith is either missionary or it is not faith,” the pope said April 25. “If I say that I am a Christian and I live like a pagan, it does not work! This convinces no one.”

“If I say that I am a Christian and live as a Christian, this attracts. It is witness[.]”

So, while Pope Francis tells Muslims that their religion is “willed by God,” Cardinal Comastri reminds us of Saint Francis, who went to the sultan of Egypt in order to proclaim Jesus Christ to him and to invite him to become a Catholic.

Though Comastri might not have thought at all of the Abu Dhabi statement, his words nevertheless express another view of the Faith — actually, the positions that have been held by the Catholic Church for 2,000 years.

But Cardinal Comastri did even more. Today, on his last day of praying publicly the Angelus and the holy rosary at St. Peter’s, he consecrated Italy and the whole world to the Immaculate Heart of Mary. According to a Vatican News report, he first remembered the many miracles that flowed from this daily rosary event: “For the last time we pray the Holy Rosary from St. Peter’s. It was a wonderful experience that involved an impressive number of people. Our Lady truly works miracles: I saw it with my own eyes.”

When praying the fifth decade of the sorrowful mysteries, the Italian prelate exclaimed, “The Cross is truly the center of world; blessed is the Cross of Jesus!” He again showed his emotions after saying these words of faith.

Cardinal Comastri, at the end of the rosary, then said a prayer of consecration together with the congregation (see here at minute 35.35). The cardinal prayed: “O Mary Immaculate, to you as our children we consecrate our life, our family, our Italy and the whole world. O Mary, always dispose of us according to your heart. And on the last day welcome us into your arms, present us to Jesus saying of us: they are my children. Then our soul will exult and our Paradise will begin. And it will be a Magnificat to God, with you, O Mary our Immaculate Mother.”

Herewith, this cardinal has done an act that was requested by many Italian faithful but that was then turned into an “entrustment” by the Italian Bishops’ Conference, as our colleague Patricia Gooding-Williams of the New Daily Compass pointed out. In her May 16 post, she regretted that the Italian bishops made an act of merely entrusting Italy to the Immaculate Heart of Mary instead of “consecrating” it to her. This act, however, was conducted not at St. Peter’s, but instead in the Diocese of Cremono. “The faithful are still asking that their original request be granted: an Act of Consecration to the Immaculate Heart of Mary to take place live, led by Cardinal Bassetti,” Gooding-Williams stated, after describing the strange circumstances of the “entrustment” of Italy to the Immaculate Heart of Mary.