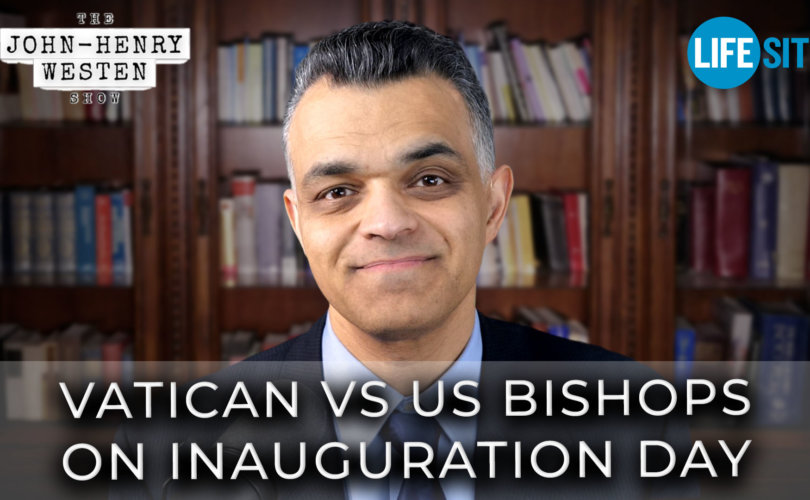 January 20, 2021 (LifeSiteNews) – The Vatican ordered the U.S. Bishops’ Conference (USCCB) to hold back a statement it has prepared incoming President Joe Biden. The statement was mostly positive but did include some criticism of Biden’s pursuit of policies promoting “moral evils.” It was postponed until a statement from Pope Francis was released earlier today. In contrast, his statement contained only praise and blessing for Joe Biden, without a single word of criticism.

The statement by the USCCB’s President Archbishop José Gómez was to be released at 9am today but bishops were informed by USCCB officials that the statement remained embargoed.

The Pillar, a new website by JD Flynn and Ed Condon, who were previously employed by Catholic News Agency, reports that “sources in the Vatican Secretariat of State, others close to the U.S. bishops’ conference, and sources among the U.S. bishops, confirmed to The Pillar that the statement was spiked after intervention from the Vatican Secretariat of State, hours before it was due to be released.”

The statement from Gomez read:

I must point out that our new President has pledged to pursue certain policies that would advance moral evils and threaten human life and dignity, most seriously in the areas of abortion, contraception, marriage, and gender. Of deep concern is the liberty of the Church and the freedom of believers to live according to their consciences.

“For the nation’s bishops,” it added, “the continued injustice of abortion remains the ‘preeminent priority.”

The Pilar reports that three sources close to the bishops’ conference informed them that objections to the statement’s release came from Cardinal Joseph Tobin of Newark, New Jersey and Cardinal Blase Cupich of Chicago, Illinois, among other unnamed bishops.

The statement by Gómez was released later this afternoon after the release from Pope Francis lauding Biden and ‘willingly’ giving a blessing to Biden and his family, without a word or hint of criticism for Biden who claims himself to be a Catholic while pushing abortion, homosexuality and contraception.

Cardinal Timothy Dolan of New York has been quoted as saying all Catholics need to pray not only ‘for’ but ‘with’ Joe Biden.

“I don't care where you stand on the political spectrum. We owe it to our new president to pray with and for him. We pray that he will do his work with honor, integrity, and justice. We ask that Almighty God bless our new president.”

We need to pray for him, yes, but not with him. Scripture tells us that those who partake in evil – such as abortion, the LGBT agenda, and homosexual “marriage” – are to be scorned.

Romans 16:17  says, “Now I beseech you, brethren, mark them which cause divisions and offences contrary to the doctrine which ye have learned; and avoid them.”

1 Corinthians 5:11  states, “But now I have written unto you not to keep company, if any man that is called a brother be a fornicator, or covetous, or an idolater, or a railer, or a drunkard, or an extortioner; with such an one no not to eat.”

2 John 1:10 adds, “If there come any unto you, and bring not this doctrine, receive him not into [your] house, neither bid him God speed.”

We need to pray for the conversion of Biden, in addition, since the bishops of the United States have already appealed to him many times to amend his ways and he has refused, it is time he is excommunicated for his own good and that of the Church.

Meanwhile, Tucker Carlson’s segment on Fox News last night gathered some of the latest statements from the Democrats that show they are on the war path against conservatives concerned about election integrity. They want not only a 9-11 commission but deprogramming as well.

Things are getting very scary if you ask me.

And that is why I asked our most beloved priest, Fr. James Altman, to come on the program today to give us this message of hope. Watch today’s episode to hear his uplifting message. May God bless you all.