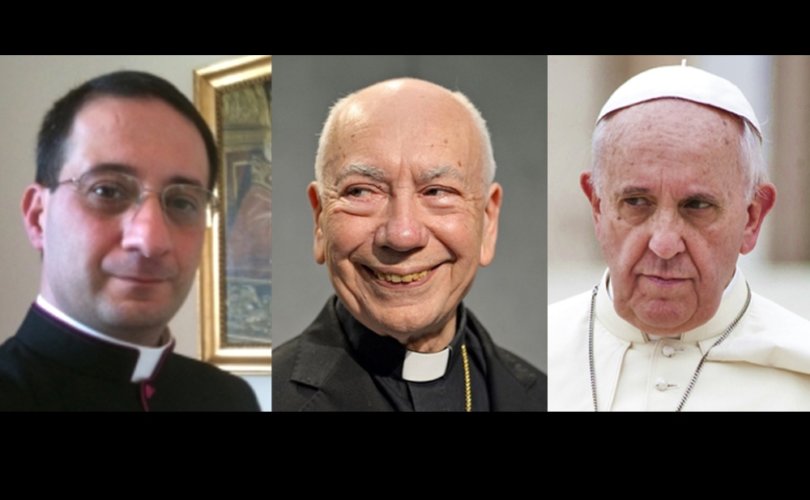 Monsignor Luigi Capozzi (left) is secretary to Cardinal Francesco Coccopalmerio (center) who is a close collaborator with Pope Francis.

Here are 12 facts about the scandal.

3. The Vatican-owned building in which the raid happened is currently being used by various high-ranking churchmen, including prefects, presidents, and secretaries to the Roman Curia. Police reportedly became suspicious after tenants in the building complained repeatedly about constant comings and goings of visitors to the building during all hours of the night.

4. At the time of the arrest, Capozzi was allegedly so high on cocaine that he was hospitalized for detoxification for a short period in the Pius XI clinic in Rome.

5. Despite Pope Francis’ promises of transparency and of cleaning up the Curia, not a word about the scandal has been spoken by any Vatican officials. Italian media broke the story last week after receiving inside information.

6. Capozzi was apparently in the running to become a bishop at his boss Cardinal Francesco Coccopalmerio’s recommendation.

7. Capozzi is bizarrely still listed as an active staff member on the website of the Pontifical Council for the Interpretation of Legal Texts.

8. Capozzi is currently in an undisclosed convent in Italy undergoing a spiritual retreat. There has been no mention of a process of laicization for his transgressions.

9. Capozzi’s boss is Cardinal Francesco Coccopalmerio, the Vatican’s top canonical official. He is one of Pope Francis’ closest collaborators and ardent supporters.

12. Coccopalmerio has been in the vanguard of advancing Pope Francis’ makeover of the Catholic Church. This includes writing a book earlier this year that defended Francis’s 2016 Exhortation Amoris Laetitia as allowing civilly-divorced-and-remarried Catholics living in adultery as well as unmarried cohabiting Catholics living in fornication to receive Holy Communion. His book was praised by left-leaning Church leaders, such as Cardinal Blase Cupich, even though it completely contradicted clear Catholic teaching on marriage, the Eucharist, and confession.